A judge has found Peterborough, Ont., MP Dean Del Mastro guilty of spending too much in the 2008 federal election and falsifying a document to cover it up. Del Mastro now faces the prospect of losing his seat in the House of Commons. 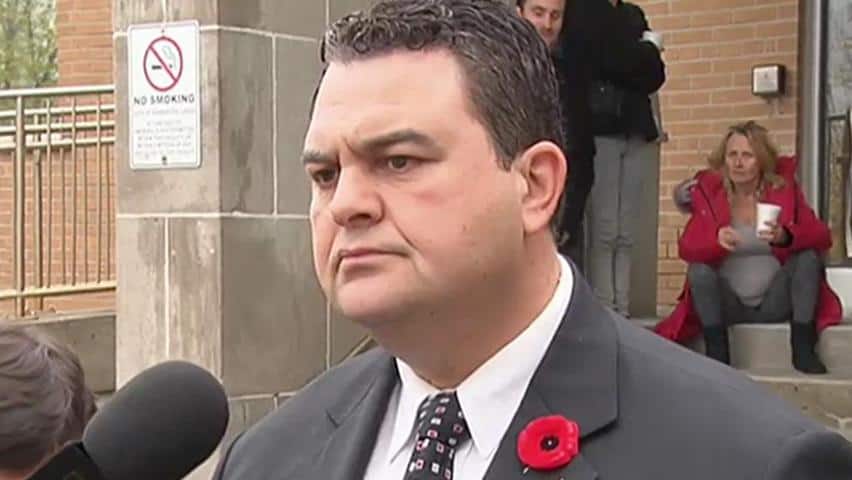 6 years ago
6:43
Dean Del Mastro was found guilty Friday of spending too much in the 2008 federal election and falsifying a document to cover it up. 6:43

A judge has found Peterborough, Ont., MP Dean Del Mastro guilty of spending too much in the 2008 federal election and falsifying a document to cover it up.

Del Mastro, who now faces the prospect of losing his seat in the House of Commons and up to three years in jail and $6,000 in fines, told reporters he is considering an appeal.

The prosecution had argued that Del Mastro ordered $21,000 in voter identification, voter contact and get-out-the-vote services from a now-defunct company called Holinshed, but claimed only $1,575 in services because the campaign realized that claiming the full amount would put it over the limit.

Del Mastro, however, said the $21,000 he paid out of his personal chequing account was for a separate set of services that Frank Hall, Holinshed's owner, never delivered.Skip Scribble

In her decision, Judge Lisa Cameron said that in her view, from the timing of the contract and its language, it "is plainly a contract for election services."

She also said that she found Del Mastro wasn't credible, "frequently obfuscated" during his testimony and that there were a number of inconsistencies.

Del Mastro sat stone-faced until the judge accepted the testimony of Hall, whom the defence sought to discredit, and discounted Del Mastro's own evidence. Then his face started to show some emotion at the pending decision.

Del Mastro, who was elected under the Conservative Party banner and once served as Prime Minister Stephen Harper's parliamentary secretary, has been awaiting the decision since closing arguments in early September.

The MP has been in Ottawa regularly and has taken part in the daily question period.

He now sits as an Independent MP.

It will be up to the House of Commons to determine how to proceed.

"Anyone convicted of having committed an offence that is considered to be an illegal practice under the act is not entitled to be elected or sit in the House of Commons for a period of five years from the date of conviction," Michelle Laliberte, a spokeswoman for the Office of the Commissioner of Elections, told CBC News.

Speaking to reporters outside the courtroom, Del Mastro indicated that he has no plans to vacate his seat.

"I intend to still occupy it. I've got a mandate from people in the city of Peterborough."

The judge's ruling "was not a final decision," he added.

"I've in no way broken any of the laws governing elections."

He seemed unfazed by the judge's finding that his testimony wasn't credible.

"I know what the truth is. That's her opinion. My opinion is quite different."

Del Mastro also suggested that he intends to appeal the ruling.

"We're going to take a very hard look at this ruling and we'll come up with a plan going forward," he said.

But his lawyer, Jeff Ayotte, appeared to downplay the likelihood of an appeal.

"Issues of credibility are difficult to appeal," he noted.

"At this point it's tough to say if we will appeal at all.… It's certainly impossible to say at this time on what grounds we would appeal."

"Whether he agrees with it or not, his only route with respect to a decision is to appeal that decision, otherwise the decision stands for what it says."

Lemon also said that he will "seriously consider" whether to recommend jail time for Del Mastro, but told reporters that it would be up to the House of Commons to decide what to do about his seat.

Ayotte was similarly unable to predict whether his client will be able to return to his seat on Monday.

"I'm a lawyer. I'm not a politician," he reminded reporters.

"I don't specialize in what the House of Commons may or may not do in this situation. I don't know."

As for the question of whether Del Mastro will be sentenced to jail time, Ayotte said it would be "very surprising."

"It would be precedent setting," he said.

"I don't know of any case in Canada where someone transgressed the Canada Elections Act and went to jail for it."

"Mr. Del Mastro has not been a member of the Conservative caucus for some time," Jason MacDonald told CBC News by email.

Del Mastro and Richard McCarthy, who was Del Mastro's official agent in 2008, were charged with:

Del Mastro was also charged with purposely exceeding the contribution limit for a candidate in his own election campaign.

The judge found Del Mastro and McCarthy guilty on all counts, although the fourth was stayed at the request of the Crown, as it was the same as the third.

With files from Janyce McGregor and Kady O'Malley (CBC News)