Seventy-five years after one of the most consequential military events of the modern age began, dignitaries and surviving veterans of the Normandy campaign gathered today in France to remember those who didn't make it back.

Three-quarters of a century ago today, Fred Turnbull was sitting in a landing craft plowing through the grey, choppy surf towards the shell-raked Normandy coast.

At almost the same moment, Richard Rohmer — in the cockpit of a sleek, powerful Mustang fighter — swooped low over the beach where Canadian troops were about to spill their blood and the blood of terrified German defenders.

It was a seminal moment for both men, and for the Western democracies fighting to free Europe from the grip of fascism.

It undoubtedly will be the last major remembrance event to hear both Turnbull and Rohmer tell the story of the Normandy invasion as they experienced it personally. 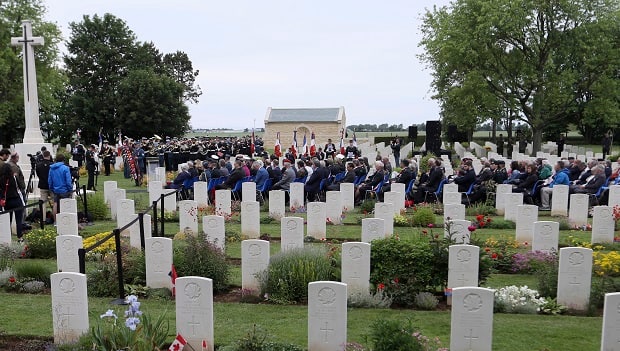 2 years ago
4:46
Prime Minister Justin Trudeau was on France's Normandy coast today to commemorate the 75th anniversary of D-Day. 4:46

Today saw two commemorative events along the 10-kilometre stretch of coastline that Canadians fought to liberate — one Canadian, one international.

As many as 5,000 people, including French Prime Minister Édouard Philippe, attended the Canadian event. Thursday's commemoration in France followed another memorial, on Wednesday in the U.K., that was attended by world leaders, including U.S. President Donald Trump, U.K. Prime Minister Theresa May and Prime Minister Trudeau.

Their chests laden with medals, Canadian veterans listened solemnly at today's event, overlooking the tall grass and sandy expanse below in Normandy.

"We thank them not only for their sacrifice, but for their example," he said. "For inspiring countless young men and women to answer the call of duty like they once did. For teaching us the value of service. For showing us the true meaning of honour.

"We thank them for leaving us a better world than the one they once inherited."

The prime minister said it's up to the current generation to preserve and protect the values of the generation that fought and won the war.

"I stand here knowing that I can never fully understand what our brave men and women in uniform experienced, and will never forget," Trudeau said.

"Only those who threw themselves against the walls of the fortress of Europe in Normandy know the full extent of what unfolded here 75 years ago. But it is the responsibility of all Canadians to ensure that their story, and their sacrifice, will never be forgotten."

In the bilingual ceremony, young Canadians recited readings from D-Day fighters, saying "we are eternally grateful."

Addressing the international event, which also was attended by U.S. House Speaker Nancy Pelosi, Trudeau thanked the soldiers who "fought back against fascism, authoritarianism and oppression.

"They risked everything so the next generation would not know what they could never forget. So we could live in peace."

Naturally, the beach today looks entirely different from the one that greeted the invading allies on June 6, 1944. The three major communities along the coastline have regained in many respects the sleepy resort quality they enjoyed before the Germans came. 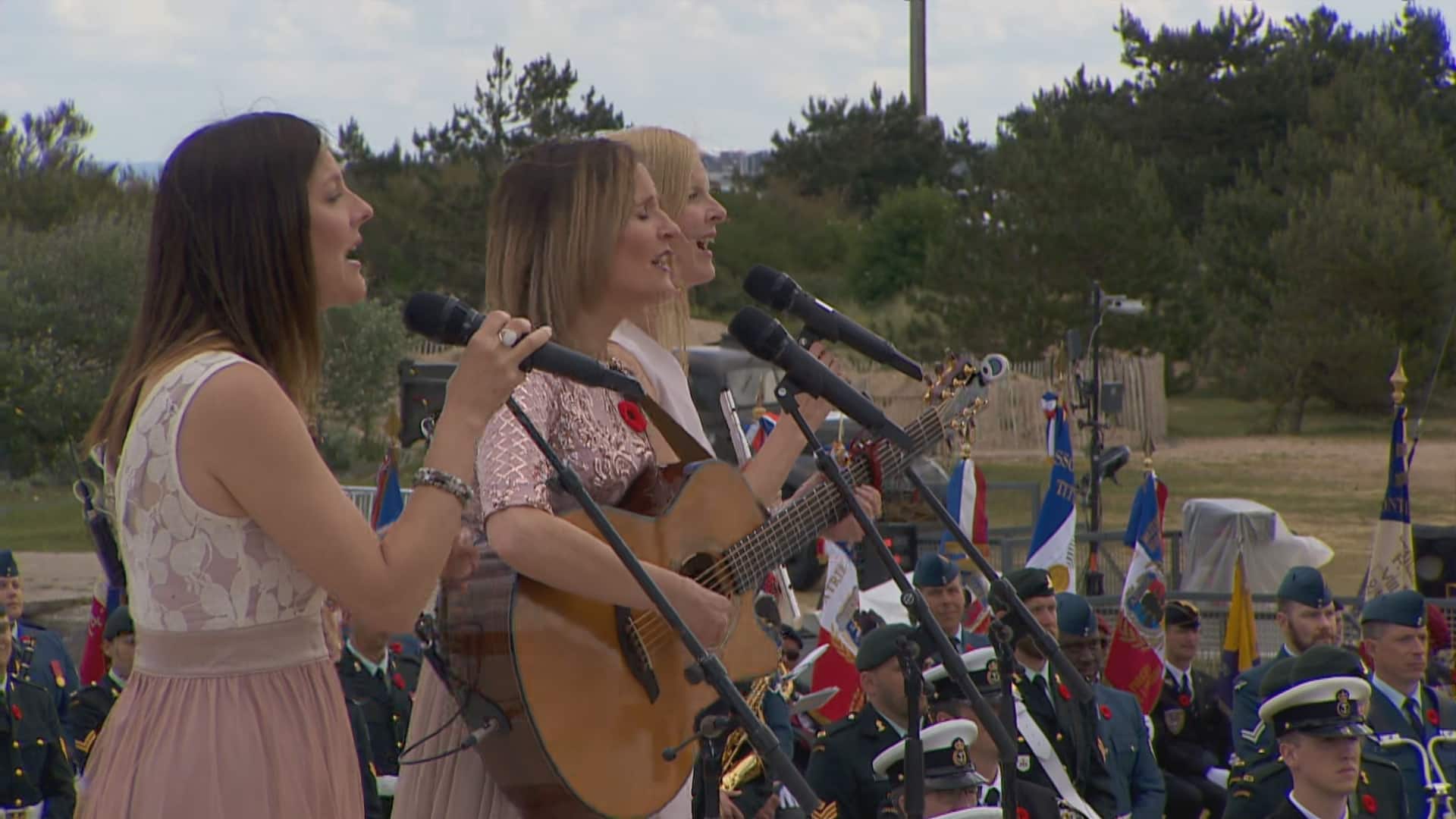 2 years ago
4:42
The Ennis Sisters sang at the massive commemoration ceremony on Juno Beach 4:42

"The first reconnaissance I did was over the beach just before the first landing craft came in," said Rohmer, who was also present on stage for Wednesday's first commemoration ceremony in Portsmouth, U.K.

"I watched them approaching and I was there with my number one to give them protection in the event the Luftwaffe showed up with aircraft to strafe them."

The German air force largely stayed home that day, as the panorama of steel, smoke and fire that unfolded before Rohmer was seared into the memories of those who fought there.

"The weather, there was a cloud bank right over the beach that we were coming into and we had to fly under 500 feet in order to do the reconnaissance," he said.

"It was fantastic to see the incoming ships, the incoming landing craft, and the explosions of the battleships that were firing right where we were flying."

The reality for Turnbull was starkly different, but no less exhilarating.

His landing craft took ashore a section of troops from the Régiment de la Chaudière, a reserve brigade.

His first hint of the invasion's cost in blood was the sight of the bodies of military divers floating in the surf — killed as they tried to disarm metal obstacles booby-trapped by the Germans.

The rising tide carried the landing craft over the deadly traps, but all six boats — including Turnbull's barge — were blown up after they had delivered their troops and turned back to sea to get more.

Turnbull and his men had to swim from the barge to the beach. There they waited as the battle raged around them for three hours before a larger landing ship came in and took them off.

"That was the worst part of it, waiting to be rescued," said Turnbull.

The soldiers cracked jokes about their plight and tried to remain calm while waiting for retrieval. One enterprising sailor liberated a bottle of rum from the wreckage — which no doubt made the time pass more comfortably.

Canadian military planners had expected 1,800 casualties on D-Day — killed, wounded and captured. According to federal government records, the day saw 1,074 Canadian casualties during the taking of the beachhead.

D-Day was just the beginning, though. By the end of the Normandy campaign, more than 5,000 troops had been killed out of roughly 18,000 Canadian casualties.