Gov. Gen. David Johnston on his letters to the Queen, reconciliation and how Canada can be better

Gov. Gen. David Johnston sat down with the CBC to reflect on his years as the Queen's representative as he prepares to hand over the keys to Rideau Hall.

'We have global challenges where Canada has important answers,' says Johnston

As Gov. Gen. David Johnston readies to hand over the keys to Rideau Hall to his successor, he sat down with the CBC's Heather Hiscox to reflect on his years as the Queen's representative in Canada.

From the sombre moments that required his steady hand, such as the Quebec mosque attack or the Parliament Hill shooting, to the warmer times when he and his wife, Sharon, shared moments with the Queen, Johnston says holding the office has been a joy overall.

But he feels Canada remains a work in progress, where our efforts to build a diverse and more just country, one that treats Indigenous people equitably, remains everyone's task.

Where is Canada falling short as a country? 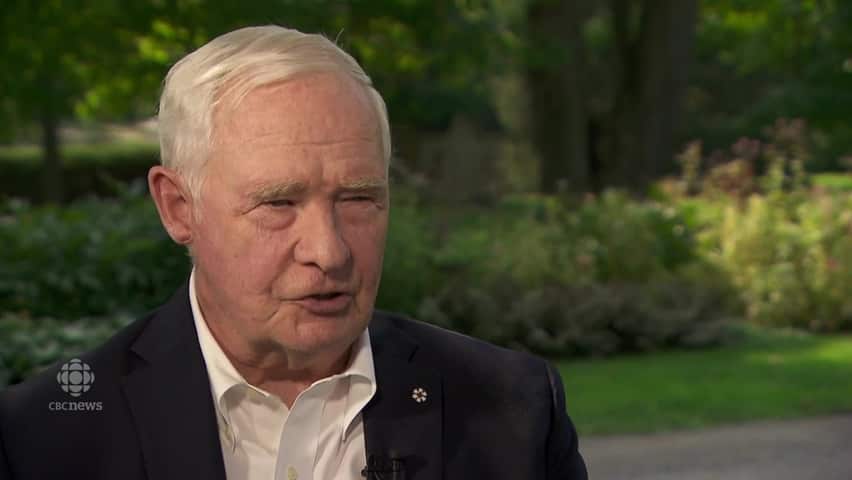 David Johnston on whether Canada is a caring country

3 years agoVideo
1:48
'Peace, order and good government is a fundamental theme of our constitution for a good reason. But, like all things Canadian, we can do better.' 1:48

I worry about complacency.… We've been blessed, our environment from time to time can be challenging, but we've learned how to live with it.

But I worry if we take those things for granted, if we don't work hard enough to identify the gaps and be smart and caring, and systematically get at them … if we become insular with regard to our respect for the rest of the world, we have global challenges where Canada has important answers.… Canada is a social innovation, an experiment that diversity and inclusiveness can be good things and make for a strong society, but you have to work at them constantly, always be raising the level of civilization, civilized life.

During your term, Canada saw things that were anything but caring, the mosque attack, the Parliament Hill attack, how concerned are you about that?

We are inclusive, we are a tolerant people, we believe in rule of law and we believe in equality of opportunity for all our people, and very often those kinds of hostile and hatred manifestations come from circumstances where those opportunities are not as present as they should be. When you look at the globe at large, there are more conflicts than we ever want to have going on.

We have 65 million displaced persons around the world today, that's more than we've had since just after the Second World War, so, there are plenty of things to occupy our minds about trouble, and I think it's important for all of us living in this blessed land to work pretty hard to show that Canadian values can work.

How has being Governor General changed your concept of what it means to be Canadian?

Is there still a hard truth that Canadians need to confront?

Doing at long last, I think, earnest efforts to ensure Indigenous Peoples have the opportunity that later settlers have had in this country — those are things that we must continue to confront and deal with and it begins with a pretty frank appraisal of what our shortcomings are.

What will true reconciliation with Canada's Indigenous people look like? 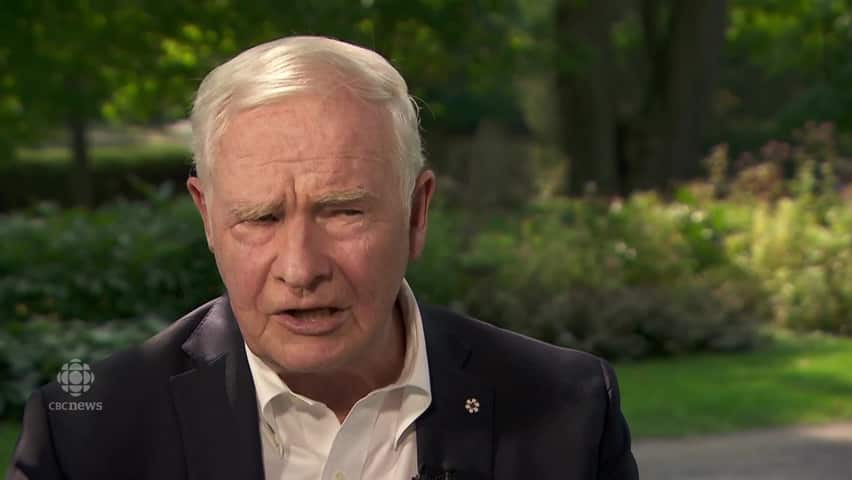 David Johnston on the truth Canadians need to confront

3 years agoVideo
2:19
'Doing at long last, I think, earnest efforts to ensure Indigenous Peoples have the opportunity that later settlers have had in this country - those are things that we must continue to confront.' 2:19

It begins with understanding the place of Indigenous Peoples in this nation. Going back eons and eons. Number 2, looking at this land, Canada, in a somewhat different light than our Western European civilization has looked at it. Number 3, really taking the notions of inclusiveness and diversity for real, and [applying it] to our Indigenous people with much to learn from them.

You've known the Queen for some time now, are you friends?

I write to her on a regular basis. When we first visited the Queen and Prince Philip they were at Balmoral — their Scottish estate — and they secure the outside of 80,000 acres, but inside it's very informal and at the end of the weekend we spent with them as they were seeing us off she said, "I read letters, you know" and I said "Well, I'll write to you, Your Majesty, and when you find my letters dull and boring you let me know, and I will cease and desist." So, the last one was about a month ago, and we're getting very close to cease and desist. 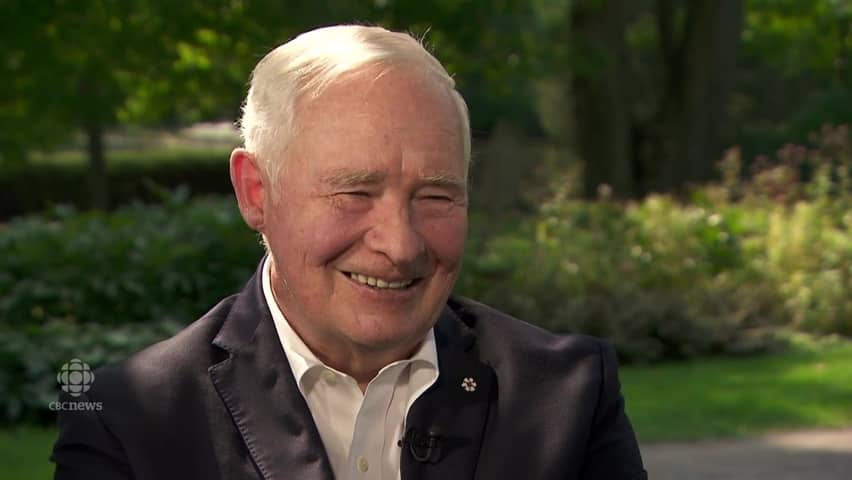 David Johnston on the Queen

3 years agoVideo
2:11
'You never leave a discussion with her without feeling a little bit wiser yourself about the world…because she’s seen a lot of history, more history, from a kind of first hand encounter than anybody living at the present time.' 2:11

But one of the funny moments which I can disclose is we went there with every stitch of formal clothing you can possibly imagine, and of course, we never put a single thing on … the first morning we come down for breakfast and Sharon and the Queen were going to the stables. Sharon didn't have any shoes — the Queen goes upstairs and comes down and says, "My dear, we have the same size feet, wear these." So she wore the Queen's stable shoes for the whole weekend.

Does Canada still need the Queen?

We live with a thousand years of constitutional history, it's constantly evolving. It will continue to evolve. Canada has always evolved, we're not the product of revolution, we're a product of change that meets the circumstances of a given time. People say, "Well what about your unusual constitutional monarchy?"

If you wanted to name 10 countries around the world where the citizens of that country and government would say it works pretty well, you'd probably have Denmark, Norway, Sweden, U.K., Netherlands, Australia, New Zealand and Canada. What's common to them? They're all constitutional monarchies with a parliamentary democracy.

You said that you and your wife, Sharon, had accepted your position with joy. Is there joy again as the term comes to an end? 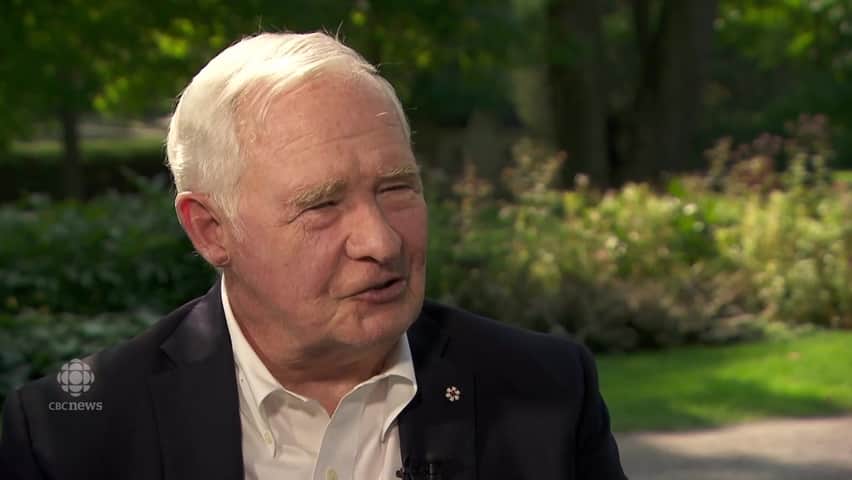 David Johnston on the 'joy' of leaving his post

3 years agoVideo
0:43
'You take on any job and no matter how you find the institution, you want to be sure it’s stronger when you leave it.' 0:43

Yes, even more. It's a gift to do something like this for seven years. You like to think that you strengthen the institution. You take on any job and no matter how you find the institution, you want to be sure it's stronger when you leave it.

We've been so blessed to see great people in this country doing really really good things, and you have a chance to put your arm around their shoulders and say "Bless you, bless you, keep on and encourage the rest of us." 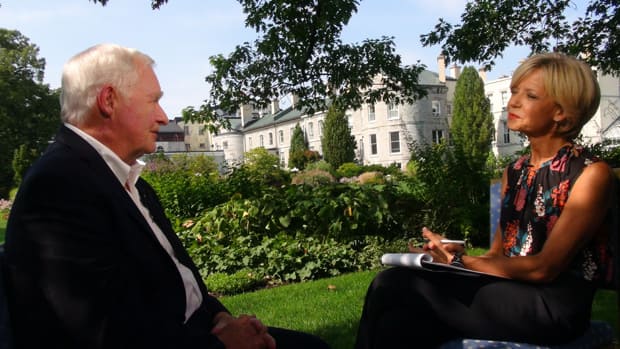