Canada's new privacy commissioner Daniel Therrien was grilled by Conservative MPs Tuesday morning after he raised several concerns about the provisions in the government's controversial cyberbullying bill that would boost surveillance powers for law enforcement officials. 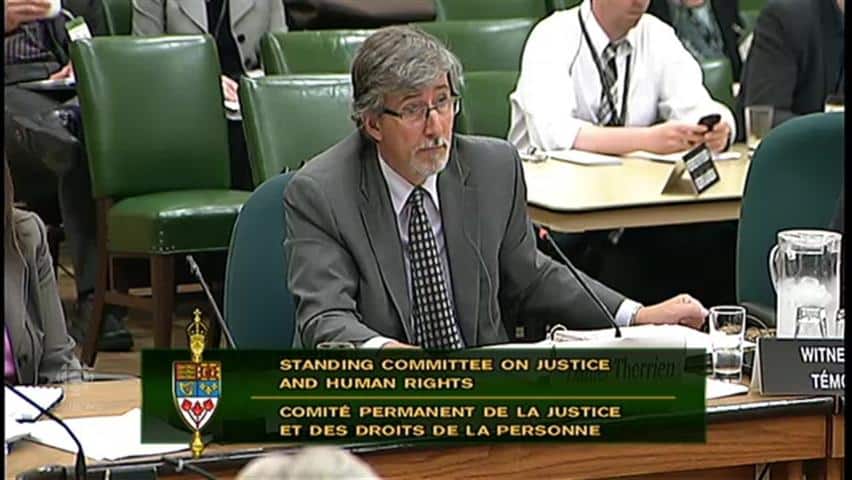 6 years agoVideo
3:34
Privacy Commissioner Daniel Therrien outlines his concerns regarding Bill C-13 while testifying at a House of Commons Committee. 3:34

Conservative MPs were quick to dismiss the views of their new pick for privacy watchdog after Daniel Therrien raised concerns about the provisions in the government's cyberbullying bill that would give increased surveillance powers to police.

Bill C-13 would make it illegal for anyone to posts or transmit an "intimate image" of another individual without that person’s consent. But other measures included in the bill would give police easier access to the metadata that internet service providers and phone companies keep on every call and email from their customers.

Therrien showed some teeth when he told MPs last week that the cyberbullying bill should be split in two​​ — in effect siding with the opposition parties and a growing list of privacy experts who have urged the government to hive off the surveillance-related provisions in the bill into a separate piece of legislation.

​Conservative MPs today dismissed Therrien's views, opting instead to grill their own pick for privacy watchdog by asking him if he was onside with police officials who have said they need the surveillance powers to do their jobs.

Conservative MP Bob Dechert said the justice committee had heard from the Canadian Association of Chiefs of Police, the Ontario Provincial Police, the RCMP, and the Halifax Regional Police.

"Each of those agencies told us these investigative powers are necessary as drafted to allow them to properly investigate cybercrimes," Dechert said.

"Are there any other police organizations you think we should hear from?"

"Would you not agree with that or or do you disagree with the police?" he asked Therrien.

"All these people are saying we need this," Seeback said.

Therrien said transmission data is more than just information one finds in an old phone book.

"It has information about location of individuals, sites being consulted, several types of information that are well beyond what was found in phone books. That, I do think, is personal data and deserves higher protection," he told MPs on the committee.

Split the bill in 2

Therrien deferred some questions to two other members of his office, but for the most part stuck to his view that the government should put the surveillance-related provisions into a separate bill.

"There are a wide range of new powers attached to Bill C-13 under which sensitive information would become more accessible to law enforcement​," Therrien said.

The new privacy watchdog said he had three concerns with Bill C-13. In his view the bill would:

Justice Minister Peter MacKay has said there is no need to divide the bill.

Therrien said if the government chooses not to split the bill, it should at the very least adopt a clause that would require Parliament to review the legislation after a certain period of time.