Federal health officials are saying there could be nearly 32,000 cases of COVID-19 and between 500 and 700 deaths in Canada by April 16 — and anywhere from 11,000 to 22,000 deaths over the course of the pandemic, even with relatively strong control measures in place.

Federal health officials are saying there could be nearly 32,000 cases of COVID-19 and between 500 and 700 deaths in Canada by April 16 — and anywhere from 11,000 to 22,000 deaths over the course of the pandemic, even with relatively strong control measures in place.

That projection emerged Thursday morning as officials released modelling on how the COVID-19 crisis could unfold in the country, and suggested that containment measures, such as physical distancing and quarantines, could be in place for months to come.

Prime Minister Justin Trudeau conceded that it won't be easy to continue those measures because the first wave of the virus could last until the summer, with other outbreaks erupting after that.

Trudeau said he could not predict how long those measures will be required, but said some experts estimate it will take six to eight months to develop a vaccine, while others suggest it could take a year to 18 months.

He pleaded with Canadians to step up to meet what he called the "challenge of the generation" and said Canada is at a "fork in the road" between the best and worst outcomes.

"This will be the new normal until a vaccine is developed," he said.

Watch: 'This will be the new normal until a vaccine is developed': Trudeau: 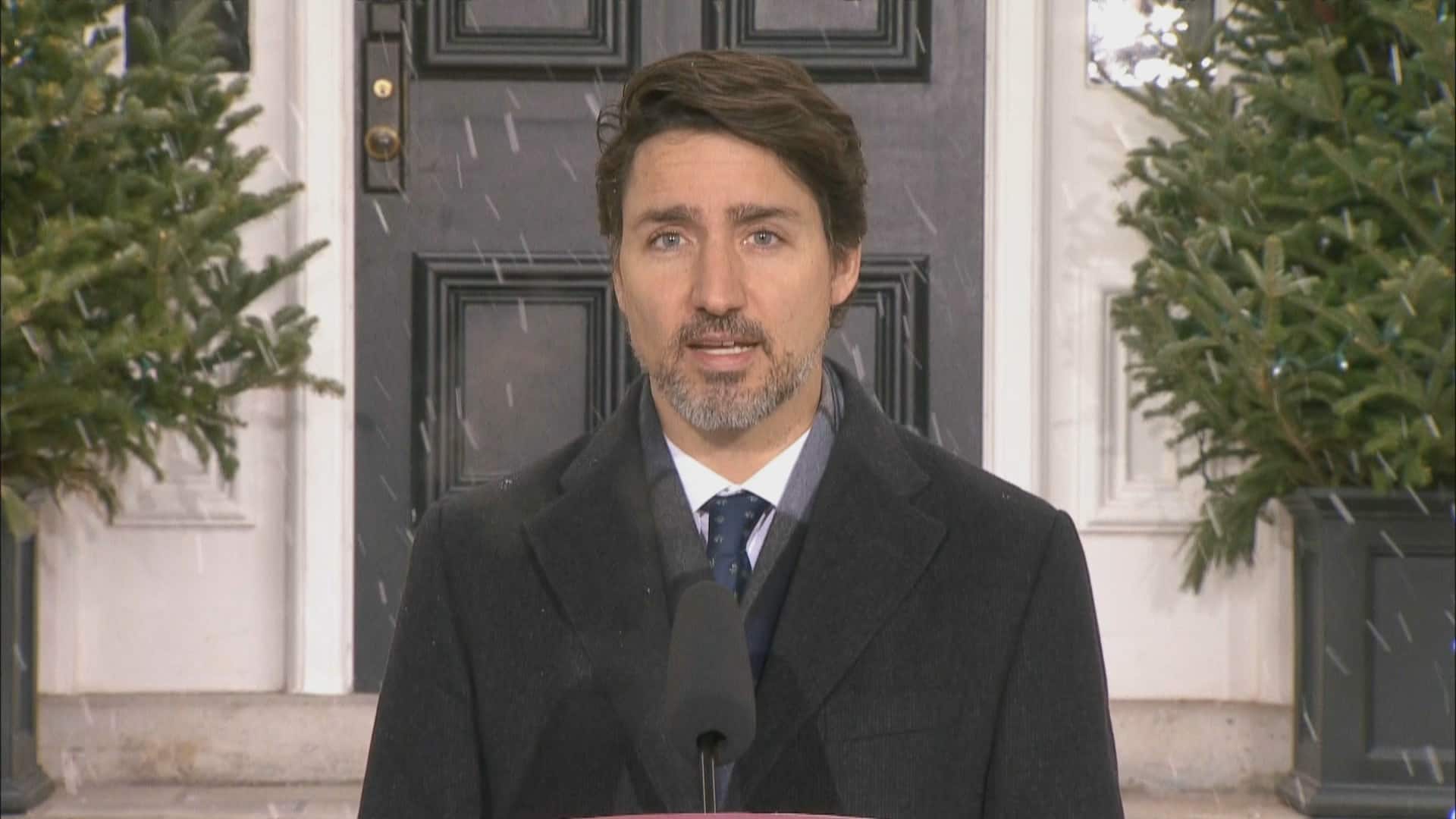 If no containment measures had been taken (which was not the case in Canada), officials said there could have been about 300,000 deaths.

Officials said the caseload in Canada is doubling every three to five days, which is considered a relatively positive trajectory compared to other countries. Chief Public Health Officer Theresa Tam said that is in large part because of lessons learned from other countries about how strong control measures can limit the spread of the virus.

Tam said she is hopeful that Canada can stay in the green zone and keep infections and deaths relatively low.

'Prevent every death that we can'

She warned that measures that can create "hardships" are critical to keeping ICU admissions and deaths as low as possible.

Tam said it's too early to know how close Canada is nationally to seeing a "peak" in transmission. But she cautioned that even as we start to see a decline in transmissions, Canadians will have to stay the course with preventative measures to keep the pandemic from re-igniting.

"What we do together now will buy us more time to further understand the virus and to develop treatments and vaccines," she said.

"We are the authors of our fate. Together we can plank the epidemic curve."

Tam said that if 2.5 per cent of the population were infected, it would inflict strains on the health care system. 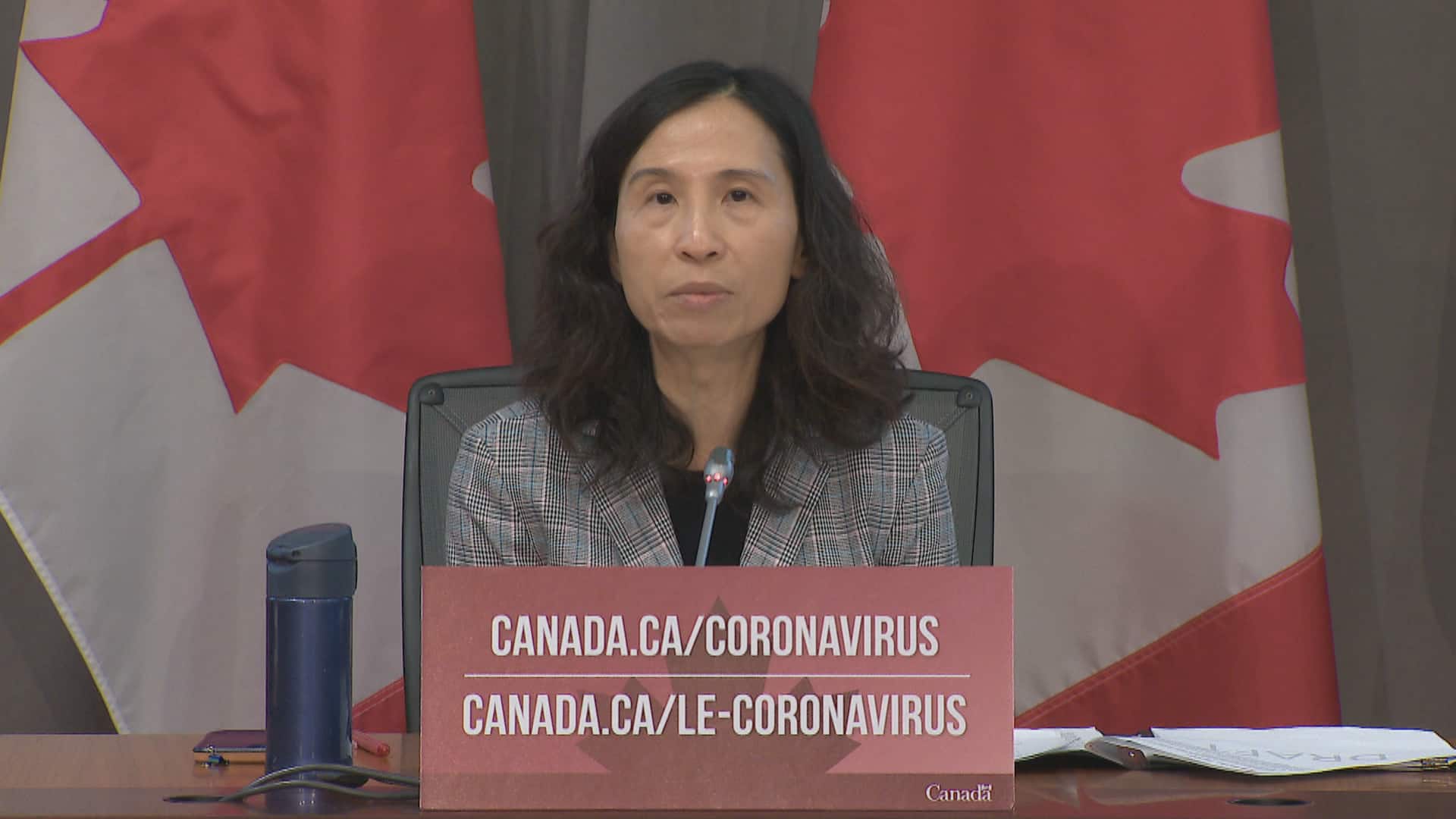 'Models are not a crystal ball': Dr. Tam

11 months ago
1:03
Canada's chief public health officer Dr. Theresa Tam says models are "imperfect" but that they can help understand the state and trajectory of the pandemic and the effect of public health measures to combat the spread of COVID-19. 1:03

Tam said officials will monitor the evolution of the outbreak and its trajectory, and "recalibrate" guidance for Canadians based on how the curve is bending.

"It is a pretty dynamic process," she said.

Officials are working to improve testing and lab capacity to detect and trace cases.

Conservative health critic Matt Jeneroux said Trudeau had no choice but to release the numbers after several provinces released their own projections and models, and said he has many concerns about the government's "reactive approach" to COVID-19.

"We heard today the peak may come in late spring, and from what I'm hearing, hospitals and front line workers are not equipped to handle this," he said.

The heads of organizations representing Canada's doctors and nurses told MPs there is a critical lack of personal protective equipment for front line workers, and called the situation "outrageous and unacceptable."

They warned that lives are at stake and asked for more transparency and urgent federal action to keep health professionals safe.

"There is insufficient national coordination and inconsistent and incomplete data. We are behind in testing, contact tracing and isolating," Davies said.

"The shortage of PPE increases risk not only for health care workers but for those working with the public generally. Our border controls still are not as vigorous as they could be."

All of those elements present challenges to Canada's efforts to contain transmission and stay in the "green zone," he said. 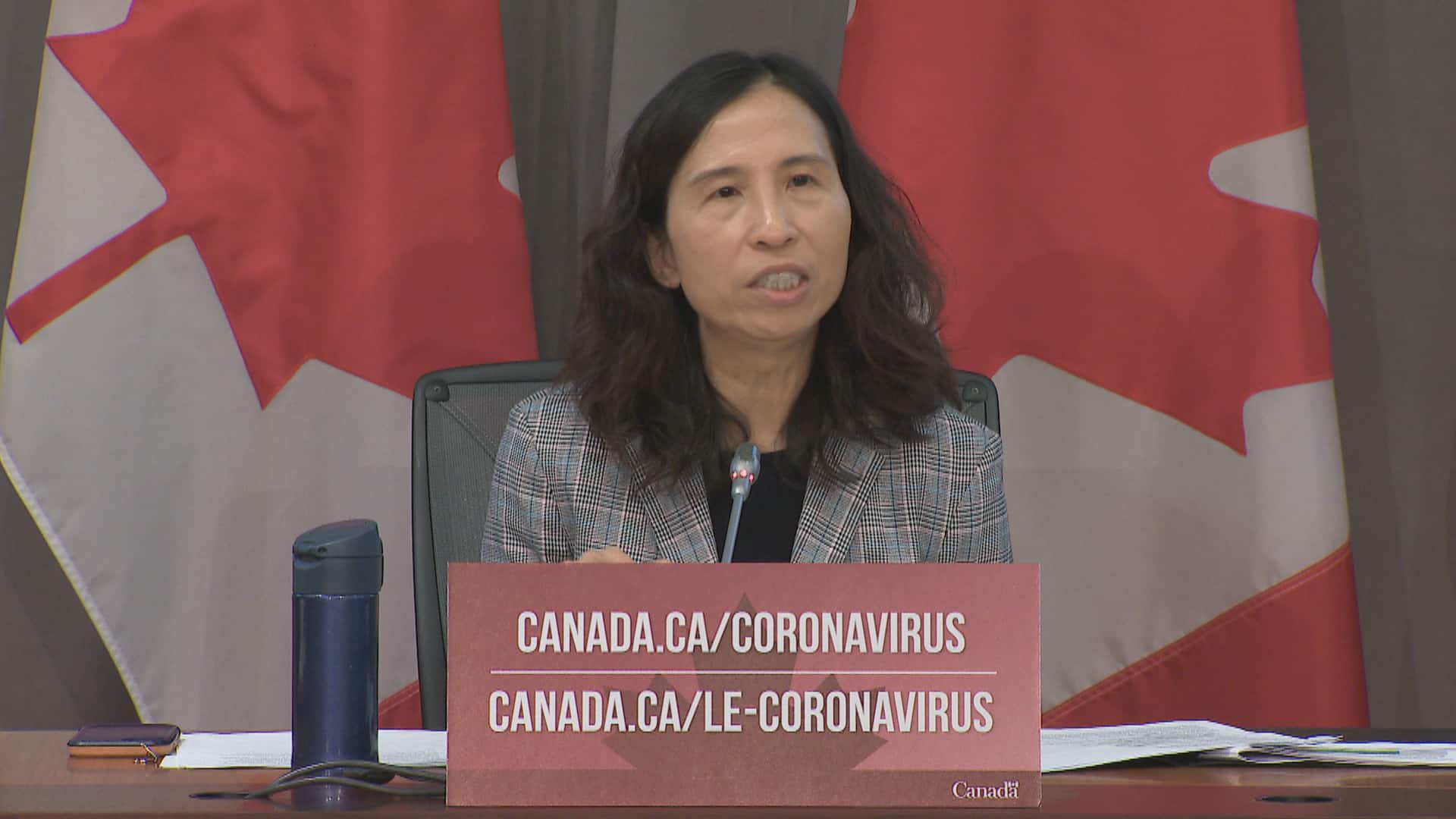 'We don't know if we've reached the peak anywhere': Tam

11 months ago
2:15
Canada's chief public health officer Dr. Theresa Tam was asked by CBC's Julie Van Dusen to say when she thinks the tightest restriction of public health measures will be lifted and how that could be possible if not all Canadians were tested for COVID-19.   2:15

The analysis of how many people could become infected, get sick or die from the virus comes just before the long holiday weekend. Tam urged people not to let down their guard, even as they mark important religious occasions such as Passover, Easter and Ramadan.

"That means dinners and celebrations need to be strictly limited to your existing household members only," she said.

"The plan for your holidays is a staycation for the nation."

Tam said the models are "imperfect" but they can help people understand the state of the pandemic and where it might go, along with the effect of public health measures on the transmission of the virus.

Several provinces have already released projections. Ontario estimates the number of deaths in the province could hit 3,000 to 15,000 over the course of the pandemic, which could last up to two years. 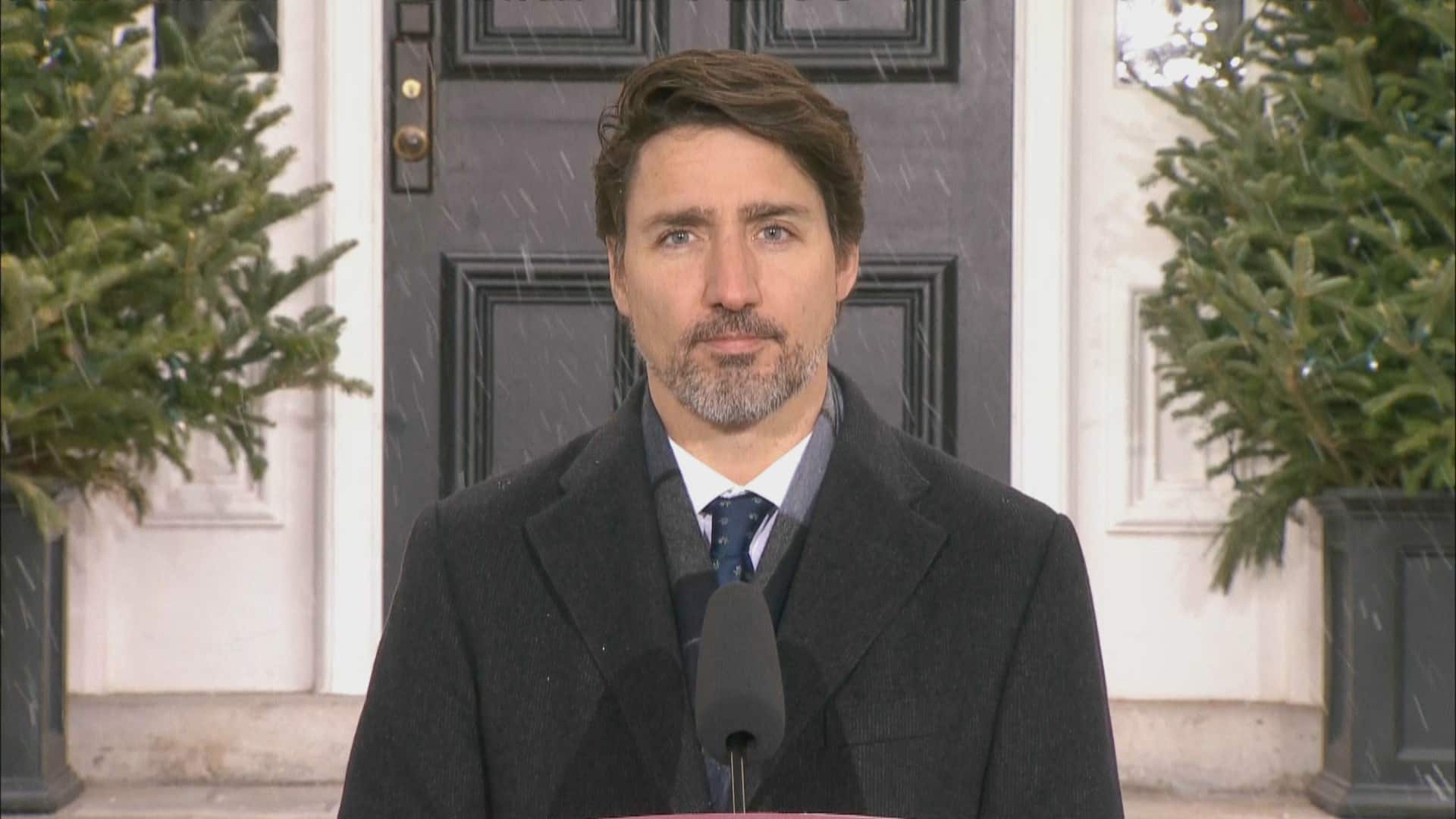 'We will need to remain vigilant': Trudeau

11 months ago
2:32
Prime Minister Justin Trudeau said normal life for Canadians will not return until a COVID-19 vaccine is developed 2:32

Trudeau has told Canadians repeatedly that how fast and far the virus spreads will depend largely on how closely they follow public health advice, including physical distancing, hand-washing and staying home whenever possible.

His remarks come as Statistics Canada reported Thursday that Canada's economy lost more than one million jobs in March, pushing the jobless rate up to 7.8 per cent.

"Obviously, this is difficult news. This is news that reflects, particularly in the job numbers, a reality that millions of Canadians have been feeling over the past weeks, that the real impact, not just on our economy, but on the lives of Canadians, of workers, of families, of communities, is significant and real," he said.

"But what we're also seeing in numbers from different parts of the country is that there is a light at the end of this tunnel, that if we keep doing the things that we're doing, as we've been doing, as we've seen in other countries, we are able to minimize the level of the impact of this wave of COVID19."

Asked when measures such as border closures might be eased, Deputy Prime Minister Chrystia Freeland said it would be "foolhardy in the extreme" to offer a guess at this point, given the uncertainties surrounding the pandemic.

She said the crisis can't end until a vaccine is available.

"In terms of what that means about the border, we just can't say," she said.