The U.S. government has asked the major manufacturer of medical respirators to halt exports to Canada and Latin America. The company involved, 3M, is balking at the order and warning the decision would make a shortage of masks in American even worse.

It's a clear threat — and it'll probably work

The Trump administration is telling one of the world's leading manufacturers of life-saving protective equipment that it must sell medical respirators and masks to the U.S. government before filling orders from other countries.

The question is whether invocation of the U.S. Defence Production Act (DPA) will force Minnesota-based 3M, which makes the N95 masks used by front-line health care workers battling the novel coronavirus, to break existing contracts with foreign governments.

The short answer appears to be — yes.

And it may be a barometer of the growing desperation of the U.S. as COVID-19 cuts a wide, deadly path through the American heartland.

The political drama that spilled into public view on Friday also points to a question: how far will the Americans go in securing access to equipment and resources to battle the pandemic?

The short answer is — pretty far.

Corporate leaders at 3M warned on Friday they were being leaned on to stop selling to neighbouring countries.

"There are ... significant humanitarian implications of ceasing respirator supplies to health-care workers in Canada and Latin America, where we are a critical supplier of respirators," the company said.

Late Friday, Trump appeared to double down and suggested there is a wider government effort to restrict the export of equipment.

"The secretary of homeland security will work with [the Federal Emergency Measures Agency] to prevent the export of N95 respirators, surgical masks, gloves and other personal protective equipment," he said. "We need these items immediately for domestic use. We have to have them."

It all represents the boiling-over point in a behind-the-scenes dispute that has played out all week, with Trump and the administration testing the ethical, legal and corporate limits of a law originally designed to mobilize the U.S. during wartime and national emergencies.

American officials have been whispering in the business community that the U.S. DPA (Canada has its own DPA which has not been invoked) has authority and effect in other countries.

Not so, according to Canada's procurement services department — which tried to set the record straight with contractors in a notice to industry this week on its buy and sell website.

"While the American DPA purports to extend the provisions of their legislation beyond U.S. borders, U.S. law has no force or effect outside of the U.S. with regards to industries operating in Canada," said the notice, posted Monday. "This means that industries that operate within Canada, including defence contractors, are subject to Canadian laws and are not subject to the provisions of the U.S. DPA."

Two can play at that game

The federal government made it clear that Canadian companies with American contracts are free to continue to supply the U.S. government, but warned they are subject to Canadian federal and provincial law, including any emergency legislation and special orders.

"While there are currently no Canadian emergency orders issued by the federal government that would supersede any contractual obligations, all contractors are required to abide by provincial and territorial orders," said the procurement services notice.

And if the Americans ever tried to butt in line for critical supplies, or buy their way ahead of Canadian contracts, "the Government of Canada would have recourse to the remedies in the contract" — legal action, damages or termination.

The message is extraordinarily clear: Canada has access to many of the same levers the Trump administration does, but it's willing for the moment to play nice.

According to federal procurement data, 3M has a lot of contracts with the Canadian government, many of them with the Department of National Defence.

The threat of cutting off supplies drew an immediate reaction from Prime Minister Justin Trudeau and top members of his cabinet, all of whom warned that cross-border trade and services go "both ways." 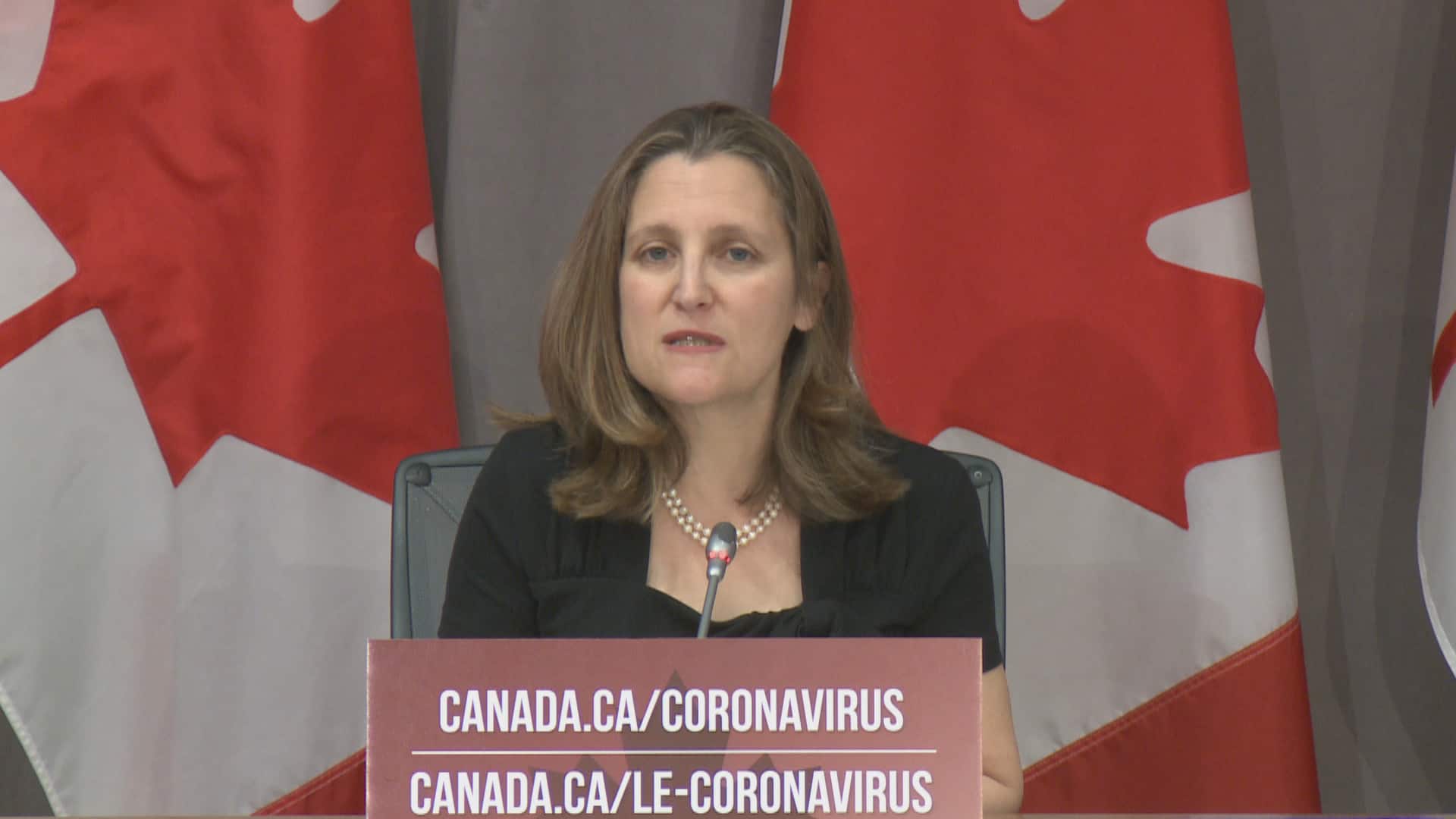 10 months agoVideo
3:03
Deputy Prime Minister Chrystia Freeland says the government will "pull out all the stops" in response to the Trump administration's decision to order 3M to stop exporting N95 masks to Canada. 3:03

The Liberals also appeared to be playing hardball with references to the doctors, nurses and health care technicians who cross from Windsor, Ont., to Detroit, Michigan to care for sick Americans. Deputy Prime Minister Chrystia Freeland noted that she raised it with U.S. trade representative Robert Lighthizer in a telephone call Thursday night.

Trudeau called it one example of how the two countries are depending on each other during this global pandemic.

"These are things the Americans rely on," Trudeau said. "And it would be a mistake to create blockages or reduce the amount of back-and-forth of essential goods and services, including medical goods, across our border. That is the point we're making very clearly to the American administration right now."

Alan Williams, the former procurement boss at Canada's defence department, said the wartime production of both countries was never designed to deal with this specific circumstance.

"This is a unique situation and even if you look at both DPAs, the notion of whether a government can impose specific restrictions [on] to whom a company sells is not absolutely clear," he said. "They have the authority to demand what they need from industry. The problem becomes when the demand forces the company to break signed contracts."

Ultimately, he said, it becomes a political battle between governments — and if Trump pushes, it will be hard for American companies to ignore.

"If in fact the president is insisting one does not deliver, that's going to be very hard for any company to just disregard," said Williams. "No one expects us to bow down and kowtow to the Americans. It's going to take political will. Hopefully saner heads will prevail."