The federal Conservative party temporarily deleted a political attack ad parodying the Heritage Minutes, after receiving a request from the organization that produces the historical TV segments, before re-posting the video with a disclaimer.

Historica Canada says they often welcome spoofs, but not for partisan purposes

The federal Conservative party temporarily deleted a political attack ad parodying the Heritage Minutes, after receiving a request from the organization that produces the historical TV segments, before re-posting the video with a disclaimer.

By the next morning, Historica Canada — the non-partisan organization that makes the videos — released a statement calling for the removal of the video.

"While we often welcome parodies of the Minutes, we do not approve of them being used for partisan political purposes," it reads.

The video was deleted in the afternoon, before being re-posted with a disclaimer.

Anthony Wilson-Smith, the president and CEO of Historica, told CBC News he was advised of the video by his staff Sunday morning. Even with the newly added disclaimer, Wilson-Smith said the Conservative ad runs "counter to the spirit" of the heritage commercials.

The Conservative spoof used similar styles of narration, graphics and historical photos to those in the official Heritage Minutes spots, but the Tory segment lashes out at Prime Minister Justin Trudeau and his cabinet for various ethical and conflict-of-interest breaches.

It details the prime minister's breach of ethics laws for his vacation to the Aga Khan's private island, the violation of conflict of interest rules by then-fisheries minister Dominic LeBlanc when he awarded a lucrative Arctic surf clam licence to a company linked to his wife's cousin, and Finance Minister Bill Morneau stalling to disclose a private corporation that owns a villa in southern France that he shares with his wife.

It also criticized Minister Jane Philpott for using the luxury driving services of a political supporter. The ethics commissioner cleared her of any wrongdoing in the spending controversy.

'Obliged' to look at legal action in the coming days

Conservative spokesman Cory Hann told CBC News the party understood how it could be mistaken for a real Historica creation.

"We wouldn't want it mistaken for a real production by Historica Canada, which typically showcase prouder moments in Canadian history," he said.

A revised video appeared on social media in the early evening, with the opening moments stating that "the following video is a parody. While it depicts actual events, it is not associated with Historica Canada in any way."

Watch: The deleted video of the Conservative's Heritage Minutes parody 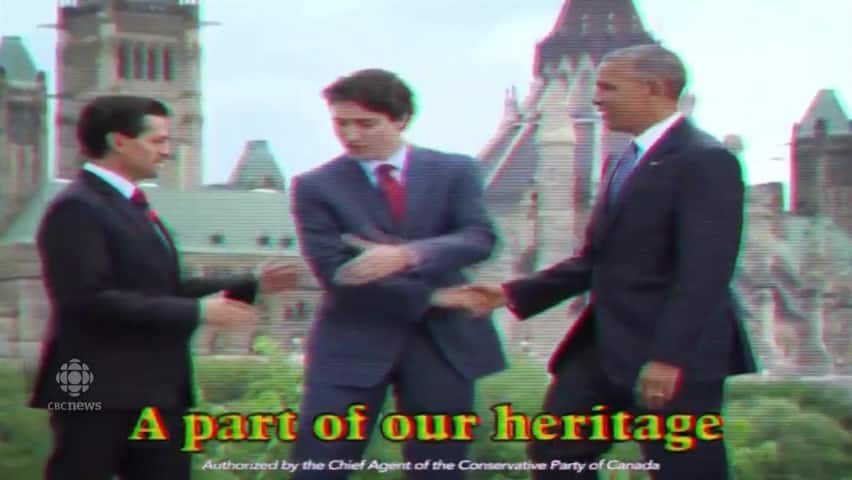 2 years agoVideo
1:00
The Conservative Party created this attack ad parody of a popular TV segment called Heritage Minutes. Historica Canada requested it be deleted, and it subsequently was. 1:00

That's not enough for Historica's CEO Wilson-Smith. He is asking for a full apology, but says he has not yet heard from the Conservative party.

It's the first time, to his knowledge, that Historica videos have been used for partisan activities, he said.

He said his organization has enjoyed a good relationship with all political parties for years, but this impacts the existing rapport with the Conservatives.

To him, it puts Historica's reputation on the line. Their funding — a mix of private and public money — would be in jeopardy if their messaging seems politically skewed one way or another, he said.

If they don't get the resolution they're looking for in the coming days, Wilson-Smith says the organization will be "obliged" to explore legal options for copyright infringement and violation of intellectual property.

"It's certainly something we can't allow to just happen quietly, we would never want to see it happening again by any party."

Some of the 90 episodes tell the stories of people such as author Lucy Maud Montgomery, Terry Fox, artist Emily Carr and Sir John A. Macdonald.