Scheer promises to slash foreign aid spending by 25 per cent

Conservative Leader Andrew Scheer is promising to cut Canadian foreign aid by 25 per cent if he's elected. Scheer made the announcement during a stop in Toronto this morning.

Conservatives say they would cut off 'middle- and upper-income countries, as well as hostile regimes'

A Conservative government would slash Canada's foreign aid spending by 25 per cent, withholding international assistance from what the party is calling "middle- and upper-income countries as well as hostile regimes."

Speaking in Toronto, Conservative Leader Andrew Scheer said he would use the $1.5 billion in savings to pay for other policies in the Conservatives' yet-to-be-released platform.

He's also promising to redirect $700 million toward aid for the world's poorest countries, with an additional focus on children in conflict zones.

The Conservatives are defining "middle- and upper-income countries" as those with a Human Development Index above 0.6, which includes Argentina, China and Barbados. The United Nations figure measures life expectancy, education and standard of living and was created to assess the overall development of a country, not economic growth alone.

Scheer also went after the Liberals for giving aid dollars to Iran, North Korea and Russia. Canada gives money to a number of programs run by a number of international groups in those countries to cover programs that include fighting tuberculosis, strengthening the rule of law and providing loans to help women start small businesses.

Between early 2015 and 2017, Canada donated close to $900,000 to help fund a UNESCO study of the education system in Iran. The funding started under Conservative Prime Minister Stephen Harper and helped identify "effective education policy reforms and models of best practice."

"At a time when Canadians are working harder than ever and not getting ahead, Trudeau is using their hard-earned tax dollars to support anti-Semitic organizations and prop up foreign dictatorships," Scheer said.

"It is time for Canada to put our money where our mouth is and only use foreign aid to support the Canadian values we hold dear."

"We are not reopening this debate at any level. What this is about is which types of countries will receive financial assistance. And so, groups that are receiving funding will continue to receive funding going in future," he said.

"This decision does not affect groups or programs going forward."

CBC is hosting a series of face-to-face interviews between undecided voters and federal leaders campaigning for next month's election.

Scheer was asked whether the cuts could affect Canada's bid for a seat on the UN Security Council. "It's more important to me that I help Canadians get ahead than curry favour at the United Nations," he replied. "That is our priority. That is our focus."

During his announcement, Scheer also committed to providing additional support to Ukraine and using Canada's Magnitsky law to target countries like Iran. That law allows the Canadian government to impose sanctions and travel bans on foreign officials responsible for human rights violations.

According to Global Affairs, Canada spent more than $6 billion on international assistance during the 2017-2018 fiscal year. The top five recipients were Afghanistan, Ethiopia, Tanzania, Mali and Nigeria.

While the rich members of the Organisation for Economic Co-operation and Development (of which Canada is a member) have agreed to spent 0.7 per cent of gross national income on aid, Canada spends about 0.28 per cent. 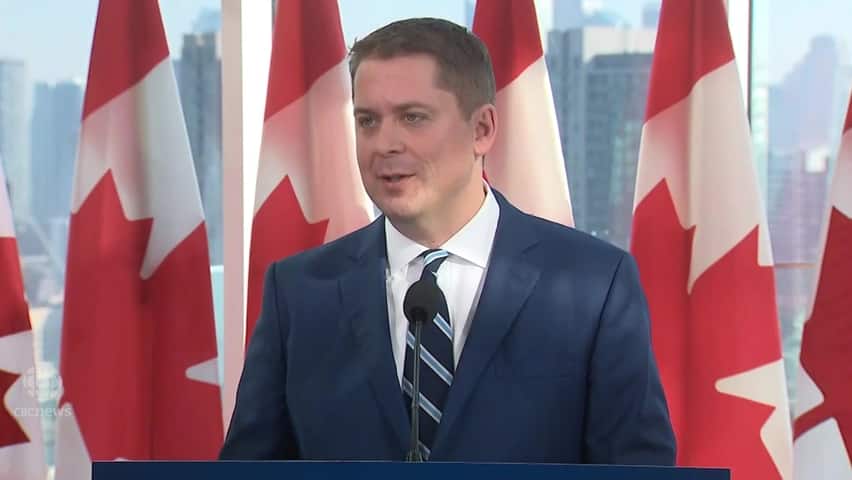 Scheer says it's more important to 'help Canadians get ahead than curry favour at the U.N.'

1 year ago
1:41
Conservative Leader Andrew Scheer says he would cut foreign aid by 25% and use that money to help Canadians, rather than use foreign aid as a tool to get a seat on the U.N. Security Council. 1:41

The Canadian Council for International Co-operation, an umbrella group that represents many Canadian development groups, put out a statement expressing concerns about Scheer's announcement.

"International development and humanitarian assistance are important parts of Canada's global leadership that contribute to visible impacts," the CCIC said in a statement.

"For example, South Korea went from a major aid recipient to an important trading partner for Canada and the world. In as little as 25 years, Rwanda, after suffering a vicious genocide, has gone from crisis to develop into a model of economic development for many on the African continent."