The fourth official Conservative leadership debate in Edmonton saw the candidates broadly agree on defence spending, carbon taxes and illegal border crossings, while engaging in spirited exchanges on taxation and plans for growing the economy.

The fourth official Conservative leadership debate in Edmonton saw the candidates broadly agree on defence spending, carbon taxes and illegal border crossings, while engaging in spirited exchanges on taxation and plans for growing the economy.

Steven Blaney and Pierre Lemieux both used their opening statements to make an argument for getting Alberta oil to international markets by expanding pipelines into the United States and across Canada.

Kellie Leitch used her introduction to hammer home her immigration plan — to screen all would-be newcomers for Canadian values and ensure all immigrants get a face-to-face interview before being admitted to Canada.

Maxime Bernier, Rick Peterson and Michael Chong promised to lower various forms of taxation, while Erin O'Toole, Andrew Saxton and Lisa Raitt all said they had the economic chops to lead the country in uncertain times.

The candidates were asked to respond to a number of policy areas, and one of the areas where the candidates broadly agreed with one another was on how to respond to U.S. President Donald Trump's demand that NATO members start living up to their commitment to spend two per cent of GDP on defence.

All candidates said they would meet the two per cent target.

Saxton reminded the audience that NATO was created to respond to the aggression of the Soviet Union and that Canada needed that alliance to defend allies such as Ukraine and to defend our Arctic. 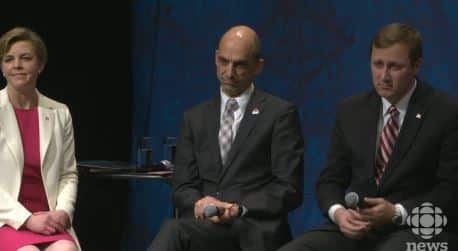 The candidates were also in agreement on the issue of refugees crossing into Canada illegally, mostly through fields, forests and farmland in Manitoba and Quebec.

Leitch said refugees and migrants coming across the border should be detained, questioned and "sent back to the United States." It was a sentiment that garnered applause from a small group of enthusiastic supporters in the crowd.

Peterson, a Vancouver-based businessman, said Leitch's immigration and border policies had so far allowed the public and the media to paint the Conservatives as an anti-immigrant party.

Raitt said illegal border crossings had to be stopped, because they were putting an extra burden on the refugee system and forcing legal migrants to wait longer to be processed.

Blaney, Andrew Scheer and Chris Alexander rolled out their tough-on-crime policies by promising to put victims back at the centre of the criminal justice system. They also pledged to prevent dangerous and repeat offenders from being released from prison.

During the question about crime, the debate quickly switched to the need for a strong economy to ensure the government has the tools it needs to effectively fight crime.

Peterson, who replied to every question of the night with plug for his economic platform, did not disappoint on crime either, promising to cut corporate income tax to zero and reduce personal income tax to a 15 per cent flat rate.

Leitch said people will only feel safe in their communities when they have jobs and can provide for their families, and she pledged to make it legal for women to use pepper spray on attackers without fear of being prosecuted.

The search for answers on crime quickly jumped into the realm of broader tax policy, and on that front Michael Chong, the only candidate advocating any form of carbon tax, came under attacks from the rest of the field.

Scheer joked by asking, "If Santa Claus, the tooth fairy and a 'revenue neutral carbon tax' see $1 on the sidewalk, which one picks it up?" Other candidates all promised to scrap Prime Minister Justin Trudeau's national carbon pricing strategy, insisting it would cost businesses and families money.

Brad Trost said he would not only scrap a national carbon tax but also all "hidden carbon taxes" in the form of green regulations and subsidies.

Chong stood up and made a passionate plea, despite some muted heckling from the crowd, as he tried the convince the audience that a revenue neutral carbon tax was the most conservative way to address climate change.

Likening it to the free trade debate that faced former prime minister Brian Mulroney, Chong said that like the former prime minister, he too, was championing an unpopular policy that was right for the country, and he was going to demonstrate the courage required to argue for it. 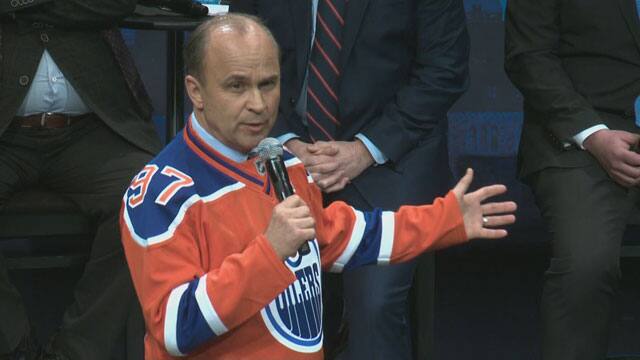 4 years agoVideo
1:34
Peterson accuses former Speaker of the House, Scheer, of not showing up for work when it comes to casting votes in the House of Commons 1:34

During the previous debate at the Manning Centre Conference in Ottawa last week, the field of 14 candidates was divided into groups of three or four to allow for some cut and thrust between the contenders.

The Edmonton debate returned to the en masse format, with all the candidates on the stage at the same time, an approach that prompted candidate Kevin O'Leary to drop out of the debate.

Instead, O'Leary held an "intimate fireside discussion" at a nearby hotel with supporters, starting at the same time as the official debate.

Because the Edmonton event is organized by the Conservative Party, the rules state that it is mandatory for all candidates to attend, which means O'Leary's campaign will have to pay a $10,000 fine against his campaign's security deposit.

O'Leary's press secretary Ari Laskin told CBC News that any fine would come out of the $25,000 O'Leary personally donated to his campaign, rather than from donations from supporters.

Watch the full debate in the player below:

With files from Susan Lunn