The 14 contenders for the Conservative Party leadership held a debate on the big stage at the Manning Centre Conference in Ottawa today, using a fresh format that pitted contenders against one another in small groups instead of letting all the candidates fight it out at once

The 14 contenders for the Conservative Party leadership held a debate on the big stage at the Manning Centre Conference in Ottawa today, using a fresh format that pitted contenders against one another in small groups instead of letting all the candidates fight it out at once.

Each group on Friday afternoon had its own policy area to battle over, which left some candidates adrift from the issues they have tried to use to define their campaigns.

Alexander said it was a myth that Tories don't care for social programs, and he promised to deliver plans to end homelessness and poverty in Canada, while O'Toole pledged to bring back the Tories' universal child care benefit because, he said, the Liberal child benefit wasn't working.

Saxton also homed in on the economy and jobs as an answer for how he would manage social policy, promising to introduce a national apprenticeship program for white collar industries.

Leitch, a pediatric surgeon, drew on her experience working as a doctor to argue that she has ideas for innovation in the health-care sector that will improve the delivery of services.  She quickly came under pressure from O'Toole, who challenged her to back up her claims.

Leitch responded by touting her years of experience, saying she has been publishing papers on how to innovate the health sector since 2002 and O'Toole was welcome to read them.

Former Conservative MP Chris Alexander chimed in, saying "the problems [with health care] are not too difficult for mere mortals to understand." 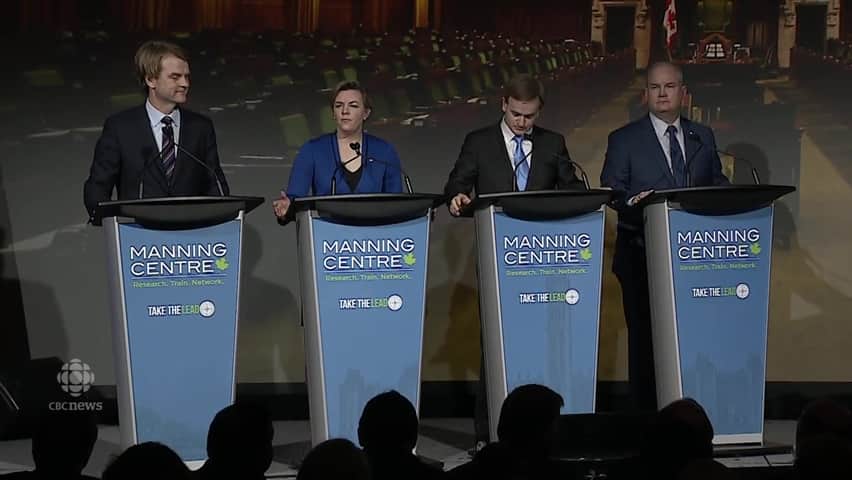 Erin O'Toole vs Kellie Leitch in the Conservative Debate

4 years ago
2:16
Erin O'Toole vs Kellie Leitch in the Conservative Debate 2:16

Alexander said he would not increase health transfers to any province that was currently running a deficit unless that province could provide plans for how it was going to bring its finances back into balance.

Former Tory MP Andrew Saxton said "throwing more money at the problem" would not solve what ails the health-care system and it was time to consider some private sector alternatives.

Both Saxton and O'Toole said the federal government should consider private sector options to improve health-care delivery in Canada.

The foursome kicked off their time on stage debating how to increase resource development across Canada in partnership with Indigenous populations.

O'Leary suggested that as prime minister he would champion resource development projects that have been initiated by First Nations themselves, while Obhrai said partnering with Indigenous peoples was key. 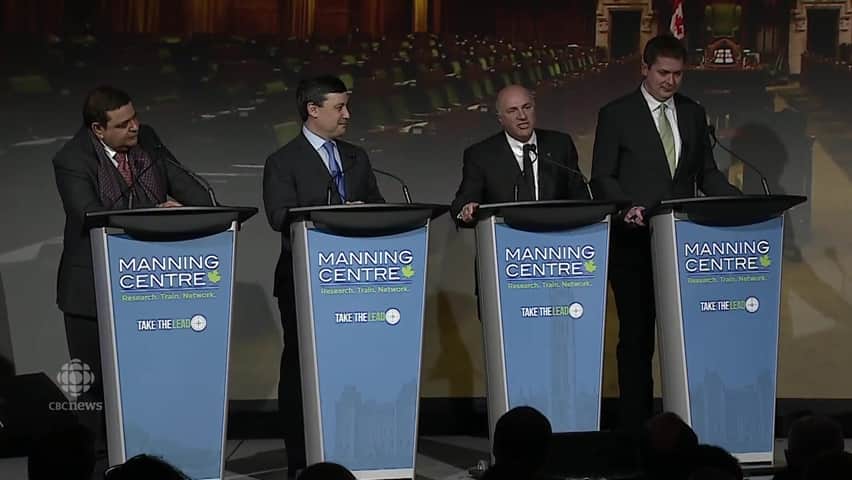 When the debate switched to the environment, Chong appeared to lose the crowd's support when he trumpeted his plan to impose a revenue neutral carbon tax. Trying to win them back, Chong said his carbon tax would be annually validated as being revenue neutral by the Office of the Auditor General of Canada.

O'Leary took a bite out of that idea by promising that any province that has a carbon tax while he is prime minister will see the its transfer payment from Ottawa reduced by the exact same amount.

That prompted a passionate rebuke by Obhrai, who urged O'Leary to "go and read the Constitution of Canada, provinces have constitutional rights and that is very very important."

His attack was echoed by Andrew Scheer, who accused O'Leary of not being committed to Canada because he has not promised to run for a seat in the House of Commons and has yet to step away from his television show in the U.S.

Asked about the coming trade talks with the administration of U.S. President Donald Trump, Conservative MP Lisa Raitt said finding a fair way to resolve trade disputes needed to be a key part of any renewed NAFTA deal.

"I think the hill to die on is dispute resolution," she said. "It's something that makes sense. It's something that takes administrative tribunals and the vagaries of United States' court decisions out of the mix when it comes down to affecting people's lives." Vancouver businessman Rick Peterson said Trump was right to want to renegotiate NAFTA, but took a shot at his fellow candidate, Conservative MP Maxime Bernier, for his desire to end supply management in parts of the farming sector.

Bernier stuck to his position, arguing that the federal government could help transition portions of the Canadian farming economy away from supply management because "it's time to have a new system of free markets." 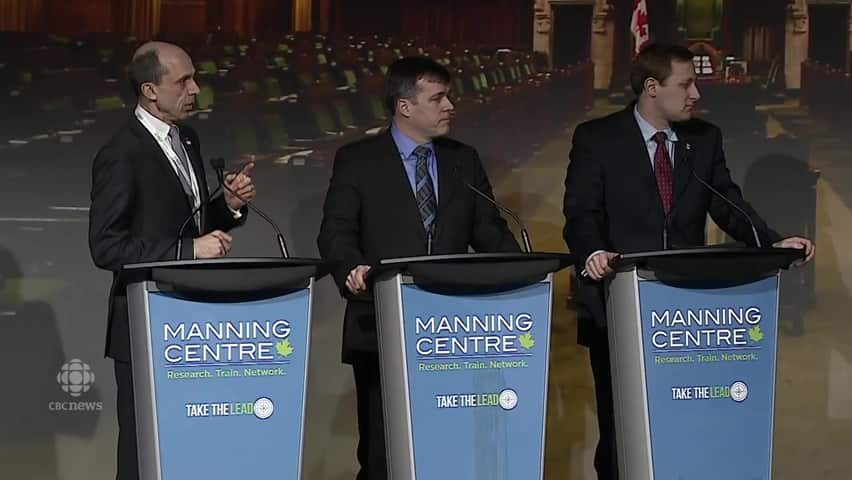