Will success of Conservative leadership vote lead to a bump in the polls?

The next Conservative leader will inherit a party that's flying high: a record number of campaign donations, a dues-paying base that is nearing 270,000 members and an opponent who is bogged down in controversy. But it doesn't appear to be translating into a bump in the polls.

Nearly 175,000 votes have so far been cast in race to pick the next party leader

The next Conservative leader will inherit a party that's flying high: a record number of individual donations, a dues-paying base nearing 270,000 members and an opponent who's bogged down in his third federal ethics investigation in five years.

The four leadership contenders have signed up an eye-popping number of new members despite pandemic-related restrictions that have made in-person campaigning all but impossible.

"There's not a pundit in the world that would have guessed at the outset of this race that we'd be smashing records like membership and turnout, and they certainly wouldn't have predicted that to have happened during a global pandemic," said Cory Hann, the party's director of communications.

Early indications show that these members are not just paper tigers. New Conservative party members also appear to be voting in impressive numbers.

As of Friday, 165,000 votes had been cast in the race to pick a successor to Andrew Scheer.

"These numbers are records not just for the party but for any leadership," Hann said. 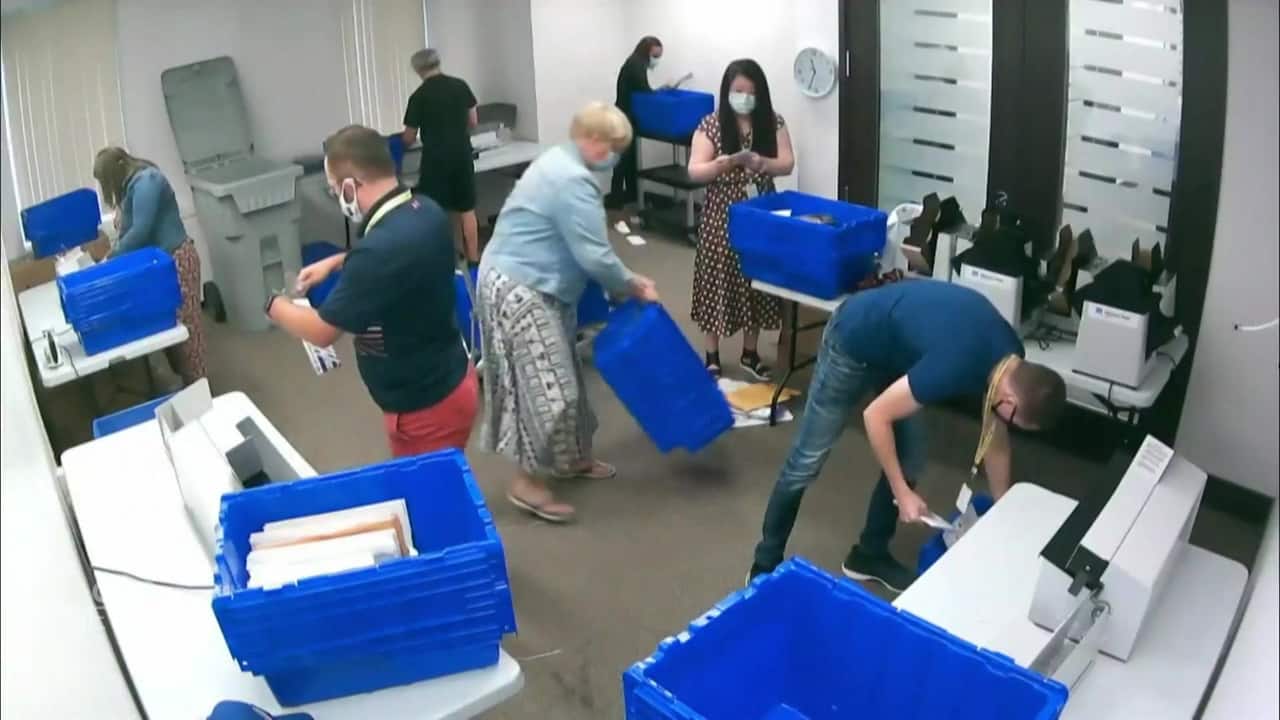 3 months agoVideo
0:45
The Conservative Party chooses its new leader this weekend with voting done by mail - which means a lot of sorting and verifying of ballots to get ready for counting. The final tally was 175,000 ballots. 0:45

The final tally will easily dwarf the 141,000 votes cast by mail and at 12 in-person voting centres in the 2017 contest that narrowly crowned Scheer over former MP Maxime Bernier.

"Given the circumstances, this is a great surprise. I would have thought we'd have real trouble meeting the target we had last time — let alone exceeding it," said Dan Nowlan, one of the co-chairs of the party's leadership election organizing committee. "We're in very good shape."

This year's count is also more than the 103,342 votes cast for Justin Trudeau in the 2013 Liberal leadership race — which was then the highest turnout in a non-Conservative leadership contest.

"There was a lot of commentary throughout this campaign, 'Oh, there aren't enough candidates,' or 'This race is boring,' or 'People just aren't engaged.' Well, I think these metrics fly in the face of all that," said Andrew Brander, a veteran Conservative campaigner who served as chief of staff to former deputy leader Lisa Raitt.

"Clearly, things seem to be trending very much in the right direction. These are all encouraging indicators for the new leader," Brander, who has stayed neutral in this leadership race, said in an interview with CBC News.

"And this really paves the way for whoever is elected to find themselves leading the country in the next 12 months."

2800 ballots en route to Ottawa. Thanks to all the incredible volunteers across Ontario! Last stop was with my boy Gaurav in Caledon. <a href="https://t.co/qmutg1hbvS">pic.twitter.com/qmutg1hbvS</a>

The party's base has been energized amid a summer of scandal for Trudeau and the governing Liberals. The WE Charity debacle has taken down a high-profile cabinet minister and dropped the party's standing in national polls after an early COVID-19 surge.

The federal ethics commissioner is now investigating Trudeau's failure to recuse himself from cabinet talks about the summer student grants contract given his family's close ties to the organization.

The four leadership candidates in this contest have hauled in an impressive amount of cash that nearly matches the amount raised in the 2017 race, when there were 17 candidates in the running to replace former prime minister Stephen Harper. A sizeable portion of that money was raised in the weeks since news of the WE contract broke in late June.

"If Justin Trudeau and the Liberals weren't so distracted by their own scandals, they'd see what a powerful message that is about their record," Hann said of the leadership fundraising success.

In 2017, the outsized group of leadership candidates raised $10.5 million after 13 months of fundraising. Reality TV star Kevin O'Leary accounted for $1.4 million of that figure.

Brander said the figures are high now because more and more Canadians are disillusioned with Trudeau.

The Official Opposition has been unrelenting in its criticism of the government's handling of the WE affair, with frequent cries of "cover up" and "corruption" and a condemnation of a "chaotic" government from the likes of finance critic Pierre Poilievre and his ethics counterpart, Michael Barrett.

The prime minister has prorogued Parliament until Sept. 23, a move that shut down the House of Commons committees that were probing his involvement in the $912 million summer student grants program.

"Let's just say the shine of Trudeau is starting to wear off," Brander said. "There's a lot of frustration with the direction the country is headed in, and all the leadership candidates have capitalized on that."

The membership surge is also driven by a feeling among members that they're not just picking a leader — they're picking a prime minister in waiting, Brander said.

The party has been able to motivate their Trudeau-hating base and draw in new members frustrated with Liberal missteps, but the Tories haven't seen much of a surge in national poll numbers overall.

According to the CBC's Poll Tracker, the Conservative numbers have been effectively flat since the start of summer, even as the Liberals have seen a four-point decline.

In the Aug. 21 update to the poll aggregator, the Conservatives were still six percentage points behind the Liberals — a sign that the Liberal dip hasn't resulted in a big boon for the Tories.

"For those who don't vote Conservative, the party struggles — they are seen as old, traditional, close-minded, some even described it as racist," Abacus Data CEO and pollster David Coletto said in an interview.

"So you get this image of a brand, of a party brand that isn't really relevant for many Canadians today and seems kind of part of the past."

Coletto said the party will have to broaden the blue tent to attract new voters and avoid some of the mistakes that befell Scheer in the last campaign, when he was dogged by questions about social issues like same-sex marriage and abortion.

He said Conservatives must have an answer to questions about tackling climate change, addressing racial inequities and how best to build back the economy after COVID-19 devastated social and economic life.

"They're relevant with a sizeable number of Canadians, but just not enough to win, and I think that's really where they need to focus going forward," Coletto said.