Scheer will stand by candidates with racist, homophobic past comments as long as they apologize

Conservative Leader Andrew Scheer says he will stand by candidates who have made controversial past comments, whether homophobic or racist, as long as the candidate apologizes and takes responsibility.

Andrew Scheer says if a Conservative candidate has made racist or homophobic comments in the past he will stand by the candidate as long as they apologize and take responsibility for those comments.

Scheer denied the party is re-vetting candidates after Liberal party researchers discovered and published a trove of controversial social media posts made by Conservatives running in the fall election.

"As long as someone takes responsibility for what they've said, and addresses the fact that in 2019 some things that may have been said in the past are inappropriate today, that if anything that they've ever said in the past caused any type of hurt or disrespect to one community or another and have apologized for that, I accept that," Scheer said to reporters during an overnight flight on his campaign plane from Ottawa to Vancouver.

"I accept the fact that people make mistakes in the past and can own up to that and accept that."

"I believe many Canadians, most Canadians, recognize that people can say things in the past, when they're younger, at a different time in their life, that they would not say today."

One party official said Scheer decided to take questions to clear the air before a full day of campaigning in British Columbia.

In the case of the candidates we've had issues with this week, people have right away expressed regret and taken responsibility.​​​​​​- Conservative Leader Andrew Scheer

"We're very confident with the scrutiny that we went through, people who were hoping to run for our party," Scheer said,

Scheer then accused the Liberals of digging up dirt on Conservative candidates as a way to distract from leader Justin Trudeau's scandals. Scheer has repeatedly called on Trudeau to waive full cabinet confidence around the SNC-Lavalin affair, accusing the Liberals of preventing police from looking into the matter.

Party knew of some past comments

He also indicated he expects more of this type of campaign warfare further into the election — and that his party was already aware of some of his candidates' controversial statements.

"In many cases we went through and we saw these and we, and the candidates, have taken responsibility for that."

"Whether or not someone in the vetting process thought that Liberals would go back and look and see what someone said as a teenager and try to make an issue out of that...," Scheer said, when asked why the candidates in question were still approved to run for the party. 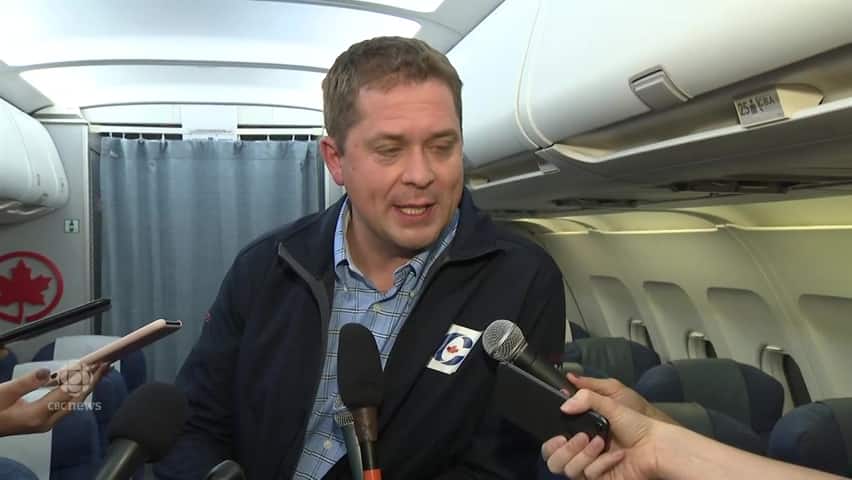 1 year ago
0:27
Conservative Leader Andrew Scheer says he will stand by candidates with racist, homophobic past comments as long as they apologize. 0:27

The apology acceptance plan is not a blanket policy though, and Scheer said there will be exceptions. "Obviously it depends on other aspects, including context."

"My point was, in the case of the candidates we've had issues with this week, people have right away expressed regret and taken responsibility."

Scheer has been knocked off message by strategic attacks coming from the Liberal campaign, which has been taking specific aim at the candidates the Conservative leader has appeared beside each day.

On Thursday, the Liberals published a video of Rachel Willson, the Conservative candidate from York-Centre in Toronto, espousing enthusiastic anti-abortion views.

When Scheer campaigned with Willson at a daycare that day, he was forced to restate that a Conservative government would not reopen the abortion issue. While Willson distanced herself from her prior comments, she did not say one way or the other whether she would bring forward an abortion bill if elected.

On Friday, the Liberals pointed journalists to a series of news articles about the Conservative candidate for Mississauga-Streetville, Ghada Malek.

Reports in the National Post and Vice News detailed how she was blocked from running as a provincial candidate for the Ontario Progressive Conservatives in the 2018 election.

She was not given the green light by the provincial PCs because of her extensive sharing of homophobic, transphobic and anti-Muslim postings on social media.

Scheer has twice publicly defended Malek, saying she has apologized for her comments and that he accepts her apology. She remains the candidate in that riding.

Also on Friday, Scheer accepted the apology from his Brampton North candidate, Arpan Khanna, for a homophobic social media post from 2010.

Despite the controversy, Scheer visited Khanna's campaign office on Friday night, stood by him for a rally, and the pair went door knocking together.

Long-time Conservative strategist Jenni Byrne told CBC Radio's The House that there's an unspoken line that shouldn't be crossed and the party needs to address it.

"I think that for all parties what you're see now is anything that falls on the line of being racist or homophobic, anti-Semitic, those are just places where no party is going to defend candidates that have said that."

Scheer was on the defensive again on Saturday, when past comments by his star candidate in the suburban Ottawa riding of Kanata-Carlton were re-published by the Liberals.

Justina McCaffrey, who is a high-end wedding dress designer and well-known in the world of Canadian fashion, told a journalist that it bothers her that Trudeau is preoccupied by French issues and the people of Quebec.

She apologized after the post was brought to light.

The Liberals also highlighted a video that showed McCaffrey's past friendship with Faith Goldy, who is accused of promoting white supremacy and hate speech. Goldy is banned from Facebook because of the content she promotes.

A Conservative party spokesperson later issued a statement on her behalf saying the video in question was from 2013, and that McCaffrey had not seen Goldy for several years. However, Goldy posted a photo of the pair together in January, 2017.

McCaffrey ran from her own campaign event with Scheer on Saturday when a reporter tried to ask her questions. Campaign staff said she had to go door knocking, rather than answer a few questions. 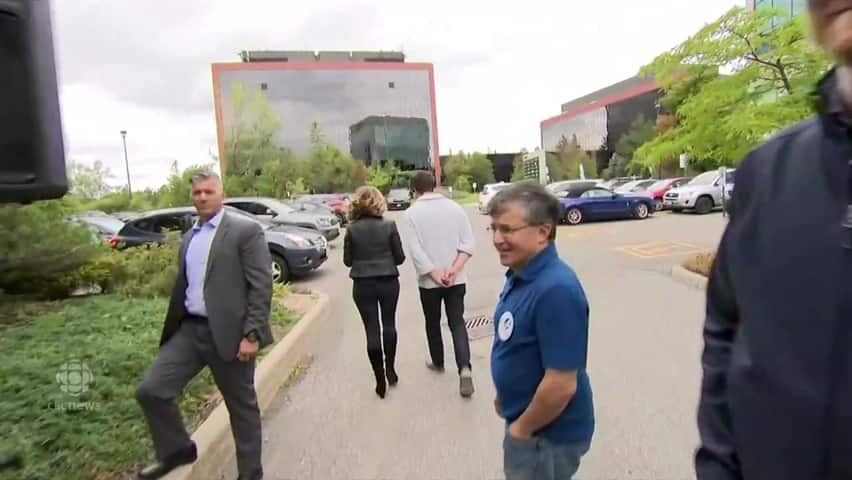 1 year ago
0:20
Kanata-Carleton Conservative candidate Justina McCaffrey fled from reporters' questions following a campaign rally with Conservative Leader Andrew Scheer after the Liberals posted an old video with her self-described friendship with Faith Goldy — who is well-known in Ontario for her far-right political views. The candidate later put out a statement saying she has not seen Goldy in several years. 0:20

Scheer will spend Sunday campaigning in British Columbia, a province where the Conservatives, Liberals, NDP and Greens all want to make gains.

Scheer decided to address the issues en route to B.C. in the hopes of changing the channel before his day of events.