The House of Commons has unanimously passed legislation authorizing new benefits for workers left jobless or underemployed by the COVID-19 pandemic.

The House of Commons has unanimously passed legislation authorizing new benefits for workers left jobless or underemployed by the COVID-19 pandemic.

In the process, the minority Liberal government has survived its first pandemic-era confidence test, assuring at least for now that there will be no election as COVID-19 cases spike across the country.

Bill C-4 passed in the House of Commons in the wee hours of the morning Wednesday, after a day of political manoeuvring and just 4½ hours of debate on the actual contents of the legislation.

It must still be passed by the Senate, which is scheduled to gather Wednesday to deal equally quickly with the bill.

Government House leader Pablo Rodriguez had announced earlier Tuesday that the House of Commons vote would be a confidence measure, meaning the minority Liberal government would have fallen if the bill had been defeated.

There was never much chance of that, however, since the NDP had promised to support the bill, having won two key changes to it.

The bill replaces the now-defunct $500-per-week Canada emergency response benefit, which came to an end last weekend after helping almost nine million Canadians weather the impact of the pandemic.

In its place, workers impacted by the pandemic will have access to a more flexible and generous employment insurance regime and, for those who still don't qualify for EI, a new Canada recovery benefit. The bill also creates a new sick leave benefit and another new caregiver benefit for those forced to take time off work to care for a dependent because of the pandemic.

At the behest of the NDP, the government has increased the proposed new benefits to $500 per week from the originally proposed $400, ensuring no one receives less than they were getting under the CERB.

It has also expanded the eligibility criteria for the sick leave benefit so that it applies not just to individuals who contract COVID-19 but also to those with underlying health conditions or other illnesses, including the flu or the common cold, that makes them more susceptible to COVID-19.

Opposition had pushed for more debate

The NDP grudgingly agreed to support fast-tracking of the bill in order to provide assurance to CERB recipients that they won't be cut adrift now that the CERB has been wound down.

But all opposition parties blamed Prime Minister Justin Trudeau for necessitating the speedy approval, without allowing for adequate parliamentary scrutiny.

They pointed to Trudeau's decision last month to prorogue Parliament, which prevented it from dealing with any legislation until Parliament resumed last week. And they accused him of using prorogation to put a stop to studies by Commons committees into the WE Charity affair, which has triggered investigations into possible conflict of interest by Trudeau and former finance minister Bill Morneau.

To draw attention to other Liberal ethical lapses, Conservative MP Michael Barrett forced debate and a vote on a motion calling on former Liberal MP Joe Peschisolido to apologize to the House of Commons for breaching conflict of interest rules when he was still an MP.

Ethics commissioner Mario Dion issued a report eight months ago saying Peschisolido repeatedly failed to disclose his private interests, including assets, loans, his marriage and the fact his B.C. law firm was taken over by the Law Society of British Columbia.

Barrett said it was just another example of Liberals ignoring the rules.

Liberals accused the opposition of putting political games ahead of the needs of people, thousands of whom were anxiously waiting to see if the new benefits would be approved.

Barrett shot back that if the Liberals wanted the bill dealt with quickly they should not have "slammed the door on Parliament" by proroguing in August.

Debate on Barrett's motion delayed progress on Bill C-4 for more than two hours. In the end, his motion passed easily with all opposition parties supporting it.

Conservatives delayed the bill again late Tuesday by proposing an amendment to a government motion to fast-track the legislation. The amendment, which would have allowed for several more days of debate, was defeated by the Liberals, with support from the NDP.

However, Sen. Scott Tannas, leader of the Canadian Senate Group, served notice Tuesday that he will introduce a motion requiring a minimum of one week of debate on all future government legislation proposed during the pandemic. In the case of a "genuine emergency," his motion would require the government to make the case in the Senate as to why a bill should be passed more quickly. 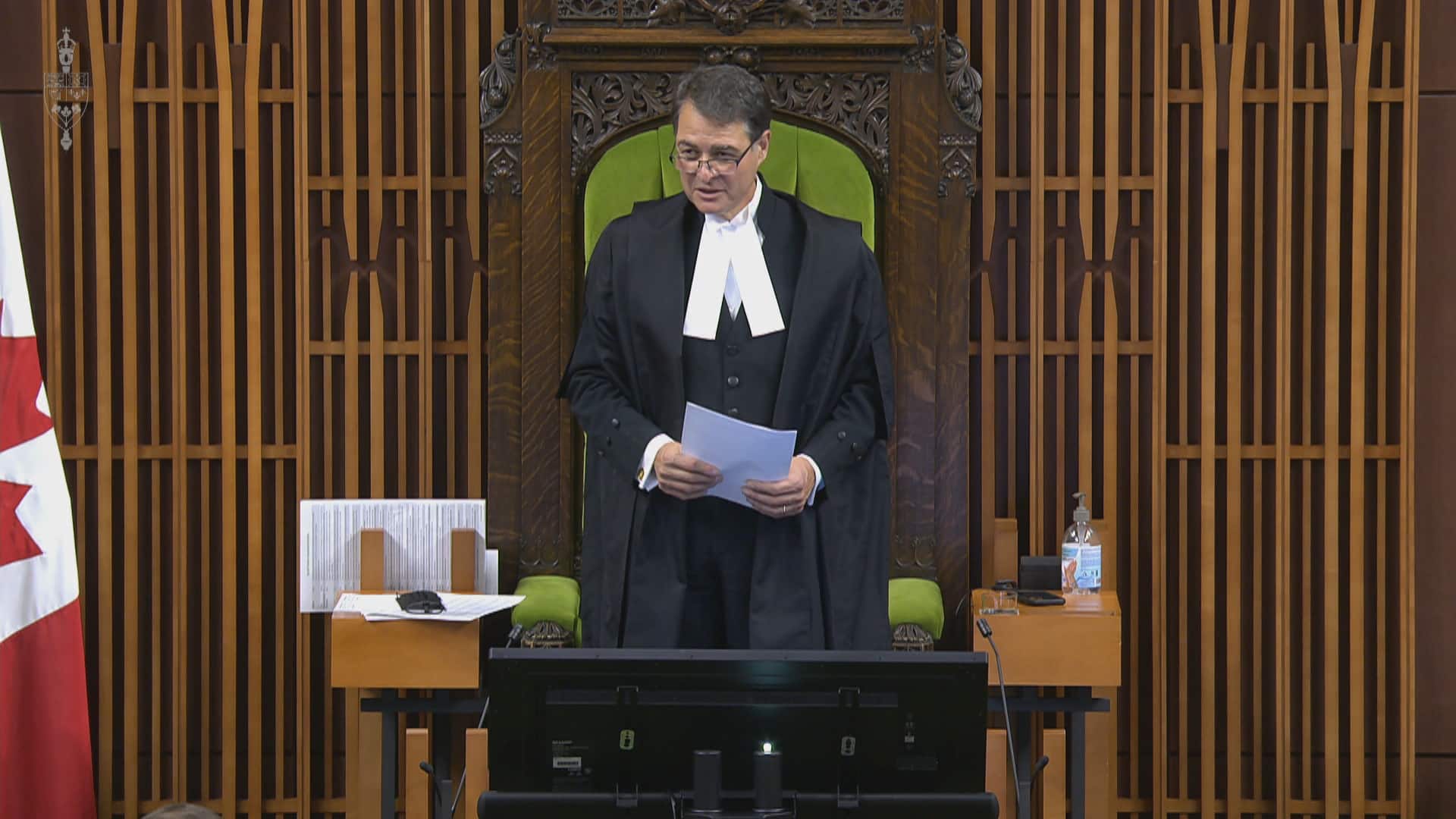 25 days ago
2:42
Monday night's vote in the House of Commons was the first one in history to see MPs participating virtually. The vote was successful but not without its share of bloopers. 2:42

Rodriguez indicated that another emergency bill — to extend rent relief for businesses — could in fact be coming soon. Following an evening cabinet meeting Tuesday, he told reporters that the government is well aware that businesses are facing rent payments on Thursday and "I can tell you, we're not going to let them down."

Unlike the House of Commons, which resumed all its normal functions last Thursday using a hybrid format — with only a few dozen MPs actually in the chamber and the rest participating virtually, including video conference voting — the Senate has not yet resumed regular sittings. Since mid-March, the Senate has sat only periodically for a few hours to swiftly debate and pass emergency aid legislation.

In a statement, Tannas said members of his caucus want the Senate to adopt a similar format to that now being used in the Commons. And he said they are "frustrated by the continuing pressure from the government on the Senate to simply rubberstamp significant, complex and wide-ranging pandemic-related legislation, spending billions of dollars without proper scrutiny and with little or no debate during one-day sittings."

Sen. Marc Gold, the government's representative in the Senate, said "collegial" discussions on the Senate's "operational continuity" during the pandemic are underway. He refused further comment.

with a report from CBC