The House of Commons is installing new plexiglass barriers by Monday because pages are reporting that MPs have been flouting pandemic public health rules, CBC News has learned.

Some MPs, staff are not keeping their distance in opposition lobby, internal emails say 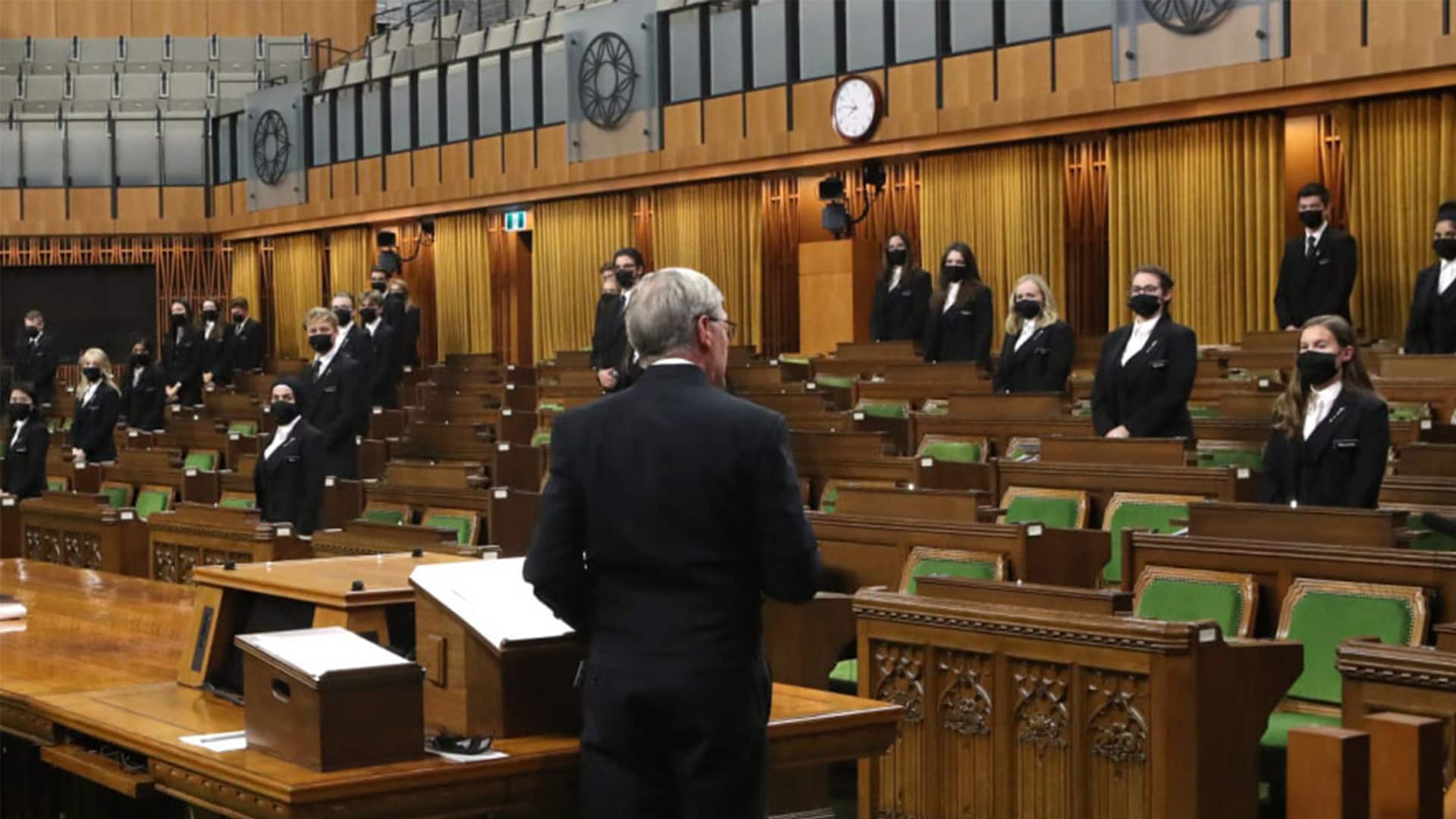 2 days ago
2:02
Some pages on Parliament Hill have complained that MPs are flouting public health rules by not keeping a distance or wearing masks in a private lobby, emails obtained by CBC News show. After the complaints, plexiglass barriers are being installed. 2:02

The House of Commons is installing new plexiglass barriers by Monday because pages are reporting that MPs have been flouting COVID-19 pandemic public health rules, CBC News has learned.

According to an internal Commons administration email obtained by CBC News, some pages have expressed concerns about their health and their families' safety because some MPs and staffers are not physically distancing from others while their face masks are off in the lobbies — the lounges on Parliament Hill where MPs can hold meetings or grab food while monitoring events inside the Commons chamber next door.

"Specifically, some members and staff who are not wearing masks are sometimes in close proximity to you when you are posted in the lobbies," Alexandre Jacques, procedural clerk and page program co-ordinator, wrote in an Oct. 1 email to House of Commons pages.

"This is something that supervisors and I have noticed in the past few days and are concerned about this."

MPs and staff do not have to wear masks while sitting in the House of Commons chamber or in the government or opposition lobbies — but they are supposed to physically distance themselves, according to rules from the Board of Internal Economy, the governing body of the Commons.

A House of Commons source told CBC News that the pages' complaints are aimed at behaviour observed in the opposition lobby shared by Conservative, NDP and Bloc Québécois. Some MPs and staff from all three of those opposition parties have been seen breaking the rules, the source said.

Some pages want masks made mandatory

After the House of Commons administration learned that CBC News was looking into the issue, it emailed all pages, telling them their health and safety is a priority and that it's taking further action by Monday in the opposition lobby.

"Starting next week, you'll notice the installation of plexiglass around your workstations in the opposition lobby," Jacques said in an email sent to pages on Wednesday.

The plexiglass barriers will offer pages an added layer of protection when they're sitting — but not when they're on their feet walking through lobbies to deliver messages — often from a party whip's staff to MPs in the Commons chamber itself.

Pages wear masks, and some want them made mandatory for MPs and staff in the Commons chamber and the lobbies, a House of Commons source said.

Some pages fear MPs could become superspreaders of the novel coronavirus that causes COVID-19, said the source, because so many of them travel back and forth weekly between Ottawa and their ridings, where they meet with staff and attend events.

"If one MP got it, everyone could get it," said the source, who asked to keep their name confidential because they aren't authorized to speak publicly.

'Too many people clustered'

Both Conservative Leader Erin O'Toole and Bloc Leader Yves-François Blanchet tested positive for the novel coronavirus last month. Both leaders had met with dozens of supporters shortly before their positive tests.

O'Toole made headlines this weekend for not wearing a mask while sitting only a few feet away from Alberta Premier Jason Kenney during a virtual event on Saturday.

"It's too many people clustered, too many without masks," May said.

May said another Green MP spotted members of different parties huddled together without masks in the opposition lobby last month, taking selfies.

She said she's seen both Conservatives and New Democrat MPs breaking the rules but thinks the Bloc caucus has been more careful. She said she has found the Liberal lobby to be "pretty well empty" lately.

May said pages are young people on the wrong end of a power imbalance with the members of Parliament they serve and may feel extremely reluctant to ask MPs to respect physical-distancing rules.

"It doesn't feel like a safe space to stick a page who has to sit at the desk and not be able to say to members of Parliament around them, 'Do you mind backing up? Would you put on a mask?'" she said.

Right now, the House of Commons is saying it's up to the pages themselves to remove themselves from situations they consider to be high-risk.

Commons director of communications Heather Bradley said that after pages started raising their concerns with supervisors, Commons administration told them "to withdraw from any situation ... which they feel is unsafe and to speak with their supervisor immediately."

Bradley said the Commons administration took steps to protect staff before the current session started — new sanitization and safety measures and changes to the pages' duties. The Commons has a smaller number of staff working now, and pages no longer deliver or collect MPs' water glasses or speaking notes. Pages are still conducting podium deliveries and picking up stationery or earpieces to limit the amount of movement in the chamber, Bradley said.

OToole's office said the Conservative Party is committed to following all public health guidelines, including the House of Commons' policy on mask use.

"Everyone deserves to feel safe in their workplace," said Kelsie Chiasson, associate director of communications for the Official Opposition leader's office.

Bloc Québécois chief whip Claude DeBellefeuille said in a media statement that Bloc MPs are respecting the public health rules in the House of Commons and in all buildings on Parliament Hill. She said the party has imposed strict rules for its members about wearing masks, reducing staff numbers and making space for distancing in the opposition lobby.

"We're just doing the best we can," Blaney said. "As the whip, what I've done is asked my members to be as safe as possible and encouraged them to wear masks. And I have been pretty pleased with their performance."

'The Commons isn't some magical room'

Independent MP Jody Wilson-Raybould said mask use indoors should be made mandatory for MPs throughout the House of Commons.

"All MPs should wear masks when indoors, just as rules are set for all other indoor spaces in Ontario," she said.

Liberal MP Chris Bittle said he would also support MPs wearing masks in the lobbies whenever they're not eating. He said he was in the government lobby last week and insisted that "100 per cent" of the Liberal MPs there were wearing masks unless they were having something to eat.

He said he wears his mask in the Commons chamber and only takes it off when speaking. Bittle said opposition MPs — and some from his own party — have asked him why he keeps the mask on.

"The House of Commons isn't some magical room where the virus doesn't spread," he said.

"I have seen opposition members coming in with masks on, sitting down at their desk but then moving close to other members of Parliament. But that's defeating the whole purpose."