Former Conservative MP Tony Clement, dropped from caucus over a public sexting scandal, is now admitting to multiple cases of "inappropriate exchanges" online and says it was "foreign actors" who tried to financially extort him.

For the first time, the Ontario MP is also admitting that he had to contact police not once, but twice over online transgressions — calling into question who in official Ottawa and law enforcement circles knew the details of the case, and when.

In a letter posted to his website on Thursday, one day after Conservative Leader Andrew Scheer asked him to leave the Tory caucus, Clement said that "during a period of personal difficulty and weakness I engaged in inappropriate exchanges that crossed lines that should never have been crossed."

"These exchanges led to acts of infidelity," he wrote.

"One inappropriate exchange led to a woman being offered money by an anonymous social media account in exchange for the disclosure of intimate and personal information."

Clement said he reported that case to the Ontario Provincial Police last summer. The force confirmed for the CBC that Clement did come to the OPP with a complaint in the summer of 2018 and an investigation was launched. The OPP would not say if the investigation is still ongoing.

He goes on to write about another "inappropriate exchange" that "led to foreign actors attempting to use my indiscretion for financial extortion."

That lines up with the statement Clement issued earlier this week admitting to sharing sexually explicit images and a video with an individual online, allegedly leading later to an extortion attempt. 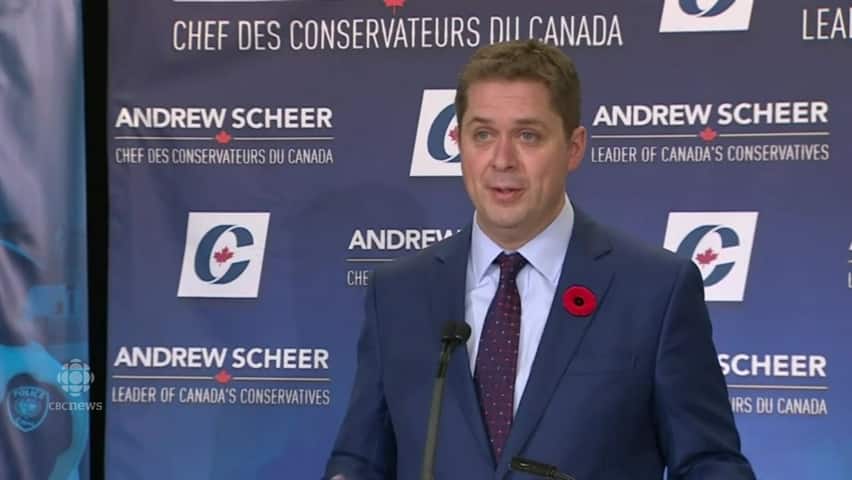 Scheer unaware of Clement's other indiscretions

2 years ago
0:23
Conservative Party Leader Andrew Scheer said when Tony Clement first came to him to discuss being extorted for sending sexual video and images across social media he did not mention a separate incident that happened in the summer and was reported to the OPP. 0:23

Sources have told CBC News that the would-be extortionist told Clement to pay €50,000 ($75,200 Cdn) or risk seeing the images and video released publicly.

That case has since been reported to the RCMP.

Sources told CBC News Clement flagged the alleged extortion attempt just a few days ago to the Privy Council Office — the branch of the bureaucracy that supports the prime minister and cabinet — and the special top secret national security committee he sat on until Tuesday.

It's not clear if Clement also flagged the OPP case to the PCO and the committee.

Scheer said he only found out about the OPP report today and suggested he wasn't the only one blindsided by the news.

"This was a shock to me when I was made aware of the situation," he said today in Brampton, Ont.

The RCMP wouldn't say whether officers were aware of the earlier OPP case. 2 years ago
0:43
Conservative Leader Andrew Scheer says he does not think members of his caucus need to be told that it is wrong to send sexually explicit images and videos over the internet to people they have never met. 0:43

"Since we are currently investigating the matter, we cannot further comment at this point," said a spokesperson in an email to CBC.

Clement's meteoric fall from the Conservative Party's front bench started on Tuesday, when he resigned his justice critic role and positions on a number of Commons committees — including a top secret national security and intelligence committee.

The rules for that committee state that "a member must, without delay, provide the Clerk of the Privy Council with a report of any change in their personal circumstances that may affect their security clearance."

While the first extortion attempt happened in the summer, a government official speaking on background said the Liberal government only became aware of Clement's situation last week, once the PCO was made aware of it.

The next day he was out of caucus after Scheer said he found out about "numerous reports of other incidents."

Clement said he plans to stay on as the MP for Parry Sound – Muskoka.

With files from the CBC's JP Tasker.