Canadian cities have told Finance Minister Bill Morneau they need money for startup costs to be ready for legalization next summer — as well as a permanent share of marijuana tax revenues.

The federal government's plan to legalize marijuana has already generated a spat with the provinces over how potentially lucrative tax revenue will be divided.

Now a new player has entered the fray: Canada's cities are demanding they be given a share of the revenue pie to help cover costs associated with legalization.

In a letter from the Federation of Canadian Municipalities to Finance Minister Bill Morneau, Canada's cities say they also want the federal government to cover start-up costs of transitioning to a new regime.

Gerbasi says the $161 million already earmarked by the federal government for training is a start, but it remains unclear how much of this commitment may flow to municipalities for local training needs. Furthermore, training is only one component of the start-up challenge local governments now face."

The federation said cities are on board with the Trudeau government's objectives and have been pre-emptively altering bylaws as they try to prepare for the changes on many fronts, despite a paucity of information.

Gerbasi, who is also deputy mayor of Winnipeg, said some cities will have to make changes to as many as 17 different departments, from policing to human resources to transit.

Tax windfall up for grabs

That, Blair said, gives the government just enough time to solicit comments on the proposal so that federal, provincial and territorial finance ministers can discuss it when they meet in Ottawa Dec. 10-11.

The plan would add an excise tax of $1 per gram of marijuana or 10 per cent of the final retail price, whichever is higher, with the revenues to be divided equally between Ottawa and the provinces and territories.

The final price, including provincial and federal sales taxes, would vary by jurisdiction, since the combined total is in some provinces is higher than in others. On an $8 gram of pot sold in Ontario, for instance, the final purchase price would be $10.17, with a $1 excise tax and $1.17 HST. In New Brunswick, it would be $10.35.

Alberta, which has no provincial sales taxes, could see the cheapest pot in the country at just $9.45 total for an $8 gram of weed. 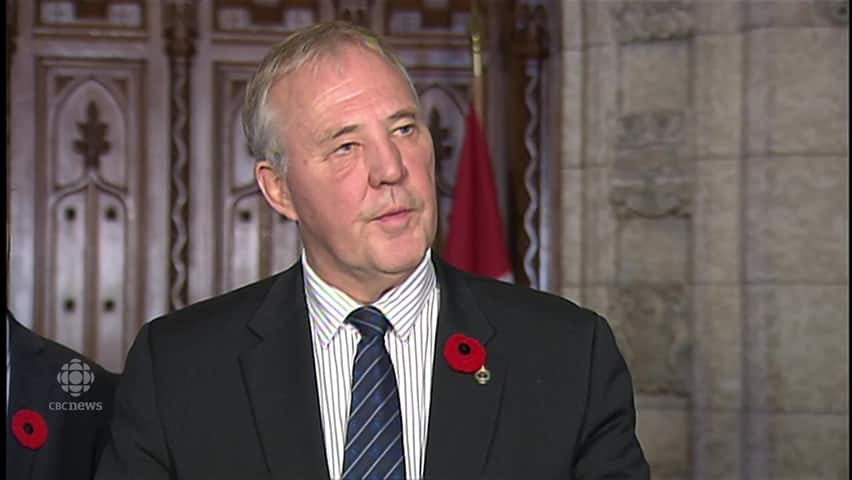 Blair on cities and legal pot

"I'm very comfortable that the level of taxation … achieves our goals of keeping the price sufficiently low to be competitive with an illicit market, while at the same time not creating an incentive for the consumption and purchase of this drug," said Blair.

Blair gave $1 billion a year as a very rough estimate of how much Canada and provinces stand to raise from the plan, although that number is at the high end of the scale, he warned, since so much depends on just how many people will end up buying marijuana once it becomes legal.

Some provincial governments have already voiced their displeasure with the 50-50 formula, arguing they should see a larger share.

The addition of municipalities to the debate could further complicate things, but municipalities make the case that many of the costs associated with legalization will accrue to them.

"Our cities are where cannabis will be used and sold," Gerbasi told CBC News. "So local governments are responsible for administering and enforcing where cannabis can be sold, ensuring private retail stores are safe to visit and work in, enforcing impaired driving and public nuisance rules, policing, it goes on and on. We're on the front lines of this."

Gerbasi said cities need money to come "from somewhere to cover these costs."

"We're the ones who are facing this, and so we need to part of this discussion prior to everything being decided and rolled out and shown to us."

Gerbasi said the federal government has shown itself open to talking with municipalities but the issue remains unresolved.

She said because so many details of the roll-out remain unknown it is very difficult for municipalities to estimate exactly how much the shift to legalization will cost. For now, the federation has published a primer to help its member municipalities prepare where they can.

Chloé Luciani-Girouard, Morneau's press secretary, said finance officials met Wednesday with a delegation from the FCM to discuss the issues.

"We are working with partners, including municipalities, to make sure our approach to legalizing, regulating and taxing cannabis achieves our goals of keeping it out of the hands of kids and profits out of the hands of criminals," Luciani-Girouard said.

Gerbasi said the FCM is encouraged that it's at least being heard, but wants more concrete commitments around money. In her letter to Morneau, she pointed out that legalization in the U.S. has always been accompanied by money for cities.

"There is ample precedent here," she wrote. "All eight U.S. states that have legalized recreational cannabis have adopted predictable funding allocations for their local governments."

The federal government is expected this morning to announce public consultations over its proposed excise tax. The next high-level discussion of how the tax revenues will be divided will probably occur on Dec. 10 when federal and provincial finance ministers meet.