Chrystia Freeland faced off with Trump and China - but is she ready for Jason Kenney?

Chrystia Freeland's former gig in foreign affairs put her at the heart of international confrontations and crises - an experience she now says helped prepare her to take on the national unity file.

Chrystia Freeland's entire cabinet career to date has been spent looking out, not in — focused on foreign files such as the renegotiation of NAFTA, or navigating an increasingly strained relationship with China.

She did that work as the world was entering one of the most turbulent periods in international relations since the end of the Second World War. So it might seem odd that she considers that experience to be the ideal preparation for her new task: taking on the national unity file as regional grievances are also growing more extreme.

"I think that's why I have this new job," Freeland said Friday in an interview airing Saturday on CBC Radio's The House.

The former foreign affairs minister was tapped this week by Prime Minister Justin Trudeau to serve as the new minister of intergovernmental affairs, a post that PMs often reserve for themselves. It's not even a separate department, like finance or global affairs; it's a secretariat within the Privy Council Office that advises the minister and the prime minister.

Freeland's mission is to work with the country's top bureaucrat, Privy Council Clerk Ian Shugart, to overcome regional tensions and find ways for the federal government to respond meaningfully to the demands of the regions.

She said she's being given both the tools and the authority to pursue solutions. Her working relationship with Trudeau on the national unity file, she suggested, will mirror their approach to the Donald Trump administration during the NAFTA talks.

"The prime minister and I felt like we came up with a successful way of working together on a really difficult negotiation known as NAFTA and we're going to take that approach and bring it to bear on our big national challenges," she said.

Those challenges begin in Alberta — where Freeland was raised — and Saskatchewan. Voters in those provinces elected no Liberal MPs last month. Both provincial governments are continuing their legal challenge of the federal government's price on carbon.

Alberta Premier Jason Kenney is looking into pulling his province out of the CPP and establishing its own public pension plan. He's also considering establishing a provincial police force and collecting federal taxes on Ottawa's behalf — just as Quebec has done.

Premier Scott Moe of Saskatchewan is demanding a change in the way equalization is calculated, and has hired former prime minister Stephen Harper to help the province expand its trading relationships in Asia rather than relying on the Trudeau government.

Moe said he emerged "disappointed" from a meeting with the prime minister last week, telling reporters Trudeau had learned nothing from his party's dismal election results on the Prairies.

Freeland said she believes the opposite is true: the Liberals' failure to elect a single MP in those two provinces and the re-emergence of the Bloc Québécois in Quebec both point to a growing divide between Ottawa and the regions — and the Trudeau government is paying attention.

"That's a serious message," she said. "Voters are saying ... that our government has some work to do in listening."

Freeland also said she thinks the vast majority of Canadians want the country to work, want federal and provincial politicians to drop the knives and get things done. She said she believes Canadians expect that of the group of anti-Trudeau Conservative premiers Maclean's magazine infamously dubbed "the resistance" on its front cover a year ago.

Manitoba Premier Brian Pallister — one of the premiers on that magazine cover — emerged from his own meeting with Trudeau after the October election suggesting the fight against climate change could unite the country. 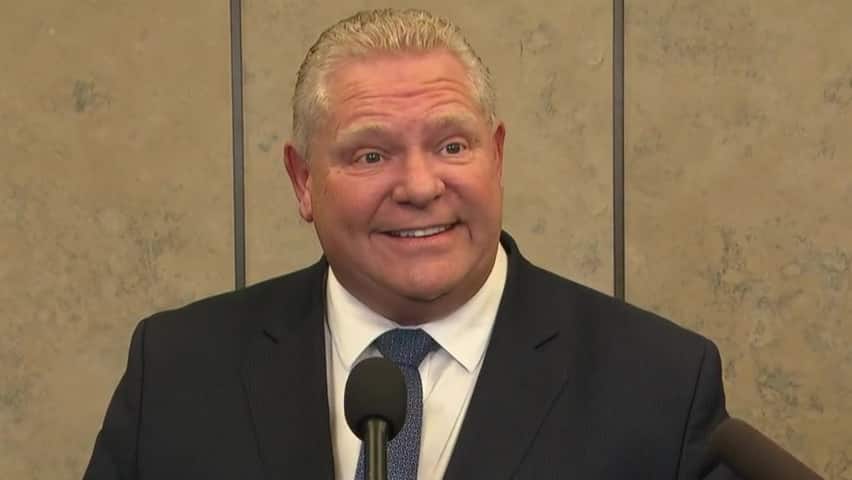 1 year ago
1:30
Ontario Premier Doug Ford says his meeting with Prime Minister Justin Trudeau was 'phenomenal'. Once part of the group of premiers dubbed the resistance, now he says the country needs to stick together. 1:30

On Friday, another charter member of the "resistance", Ontario Premier Doug Ford, had his own session with the prime minister and Freeland in Ottawa. They discussed working together on job creation and investments in public transit and other infrastructure projects.

Asked afterward by a reporter how the meeting had gone, Ford called the conversation "phenomenal."

Did the carbon price come up?  "No, no. Never came up," he replied.

"It's absolutely critical we unite the country and we stick together. I can't emphasize it enough. We have to stick together as a country and send a message to the rest of the world that we're Canada and we're ready to move forward."

The premiers of Alberta and Saskatchewan present a different challenge.

A 'daughter of Alberta'

The Liberals have played up Freeland's personal connection to Alberta, along with Environment Minister Jonathan Wilkinson's years spent working in Saskatchewan — even though neither minister represents a riding anywhere near Canada's oil and gas heartland.

Still, Freeland said her early life in Peace River, a community of about 6,700 people roughly 480 kilometres northwest of Edmonton, gives her a unique perspective on the needs and anxieties of the region.

"I would describe myself as a grateful daughter of Alberta," she told The House when asked whether her government is hyping her Prairie roots.

"I really know myself to be a product of Alberta's excellent public schools, a product of the Alberta Heritage Trust Fund created by (former premier) Peter Lougheed, whose amazing scholarships are the whole reason I had an international career, and sent me to Harvard."

The impressive set of diplomatic skills she acquired over that international career is what the Liberals are counting on now to help them navigate one of the roughest patches in domestic politics in more than two decades.