Ratify TPP or Canada will be 'shut out' of foreign trade, Christy Clark says

B.C. Premier Christy Clark is urging Prime Minister Justin Trudeau to ratify the Trans-Pacific Partnership or face what she says would be the dire economic consequences of rejecting the largest trade deal in world history.

B.C. Premier Christy Clark is urging Prime Minister Justin Trudeau to ratify the Trans-Pacific Partnership or face what she says would be the dire economic consequences of rejecting the largest trade deal in world history.

Clark said she supports the 12-nation Pacific Rim agreement — which was negotiated by the former Harper government — "100 per cent."

"In every trade deal there are downsides, but you think about what NAFTA has done for Canada in terms of growing jobs" and the country cannot pass up similar net benefits with the TPP, Clark said.

"We do 60 per cent of our trade with TPP countries in British Columbia, if we are not signed on to that deal we are going to be shut out," the premier said in an interview with Chris Hall on CBC Radio's The House.

"It's not like this is a decision that's consequence-free. It could compromise NAFTA and our access [to the United States and Mexico]," Clark said. "It's a good deal for the country."

Clark said her Liberal government in the B.C. Legislature will pass a motion during the next session, calling on the federal government to ratify the TPP.

"We're bringing together a coalition of people who support it, because we want the federal government to know: We understand they need to have a conversation with Canadians as they promised in their platform, but we'd like them to do it quickly and we'd like to get this done," Clark said.

The deal, which has a two-year ratification deadline, has been criticized by a broad range of groups who have warned it could kill Canadian jobs, and does not have adequate environmental and labour protections.

NDP Leader Tom Mulcair has been leading the charge against the deal in the House of Commons saying the government should not ratify an agreement that was "negotiated in secret in the dying days of the Conservative government."

"Independent studies say tens of thousands of Canadians stand to lose their jobs. Those are not just numbers; they are people's livelihoods; they are Canadian families ... the Liberals are not only willing to accept a worse deal than the U.S., but they admit that they have no studies of its impact on Canadians," Mulcair said in question period Thursday.

Others have said that sitting out of the deal could give the U.S. and Mexico the upper hand in all future trade with Asia, assuming those countries ratify it.

International Trade Minister Chrystia Freeland signed on to the TPP in New Zealand this week, but has said it's "just a first step" and not necessarily a done deal.

British Columbia is in the midst of an economic boom, leading the country in growth — nearly double that of the national average — and the province has its fiscal house in order.

The C.D. Howe Institute recently named Clark as the Canadian leader with the best fiscal record, given her government is running a budget surplus, and B.C. is still pushing ahead with an ambitious $7-billion infrastructure program.

"I remember [former Alberta Premier] Ralph Klein telling Albertans, 'Here's a bus ticket, go to British Columbia and get your welfare.' Well, now we are saying to Albertans, 'We know you are in tough times, until you do better, we'd love it if you cross the Rockies and help us build our economy.'"

But Clark said that in an era of global economic uncertainty she can't take her eye off the ball, and needs the federal government to step up with infrastructure spending to help keep the B.C. economic engine humming along.

She said that Trudeau could take a leadership role in "nation-building" by pushing through upgrades to the Vancouver port, the country's largest, and rapid transit. Clark flagged urban transit as a crucial element to meeting the country's climate change goals.

Clark is set to host a first ministers meeting in Vancouver during the first week of March. Environmental ministers from across the country will gather to hash out a plan to meet commitments Canada made during the climate talks in Paris.

The premier warned that the road ahead will be tough, as even B.C. — which has the highest carbon tax in North America — has struggled to meet its target for carbon emission reductions.

"[The $30 a tonne carbon tax] covers 80 per cent of the economy and we're still not meeting the goals.

"If we couldn't meet our goals with the most expensive and broadest carbon tax in North America, we're going to have to be very imaginative in our strategies as a nation," Clark said.

The federal government needs to take the lead on reducing emissions from buildings, for example, which produce 20 per cent of the country's carbon emissions.

"I know the prime minister has a vital interest in that," Clark said to Hall. 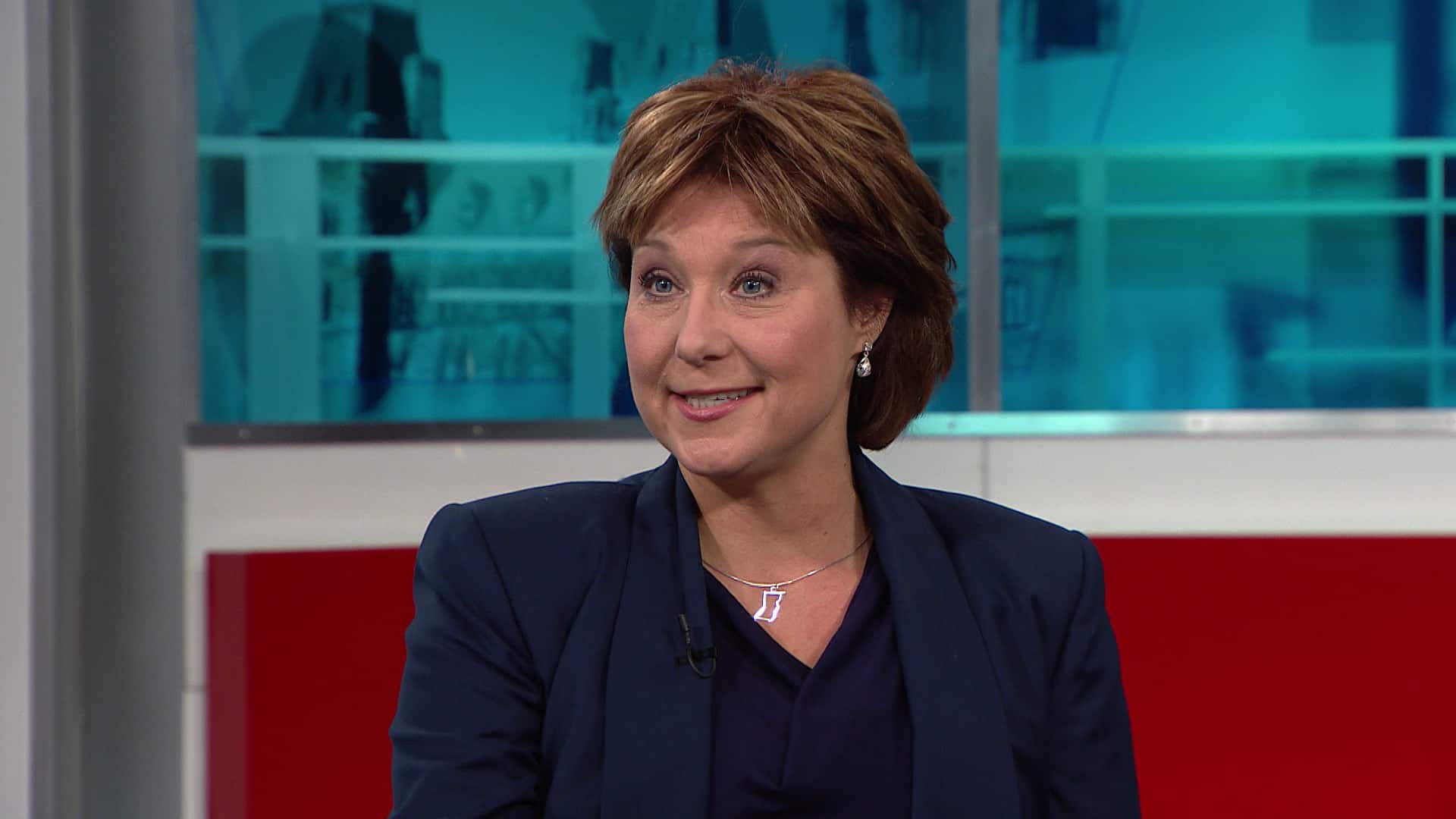 Clark claimed victory in the last provincial election — a dramatic come from behind win after trailing the B.C. NDP in the polls for months — largely on her plan to expand the province's liquefied natural gas (LNG) capacity.

She said exporting LNG would be vital to the province's future, a source of 100,000 jobs and a key way for B.C. to become debt-free. But progress on that initiative has largely stalled, with Royal Dutch Shell putting new projects on hold in the midst of a natural gas price rout.

But Clark said the LNG projects, which are principally in the province's north, are not yet dead and her dream of becoming an LNG powerhouse has support from the prime minister.

"[Trudeau] has been nothing but positive about what we're doing for LNG. My sense from him is that he supports resource development and he wants to help us get there, and get there as quickly as we can.

"The central thing that animates him I think is jobs. He wants to support the middle class … we need to extract our resources."