In a wide-ranging interview with CBC Power & Politics host Evan Solomon, former prime minister Jean Chrétien recalls details of the political drama that played out in the run-up to the patriation of Canada's Constitution 30 years ago. 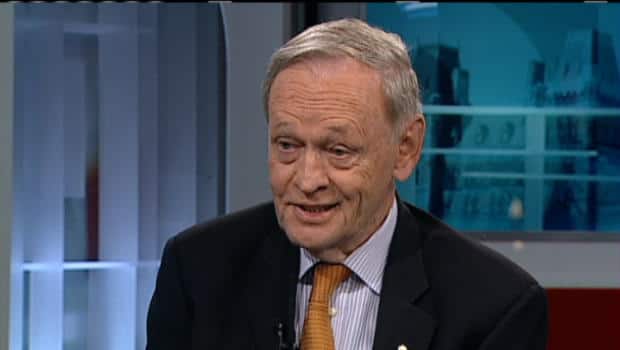 Chrétien on the charter

9 years agoVideo
17:29
The former prime minister discusses the 30th anniversary of the Canadian Charter of Rights and Freedoms and whether the Liberal Party and NDP should co-operate 17:29

In a wide-ranging interview with CBC Power & Politics host Evan Solomon, former prime minister Jean Chrétien recalled details of the political drama that played out in the run-up to the patriation of Canada’s Constitution and the Charter of Rights and Freedoms 30 years ago.

Chrétien dispelled accounts of an event known as "The Night of Long Knives," after Quebec's Parti Québécois Premier René Lévesque claimed to have been "stabbed in the back during the night."

At the time, Lévesque lashed out at what he viewed as a profound betrayal by politicians who had conspired in secret against Quebec.

Asked by Solomon if the version of events perpetuated by sovereigntists was a myth, Chrétien replied: "It’s a myth, complete myth."

"It never happened. I was at home from 11 o’clock and [former prime minister Pierre] Trudeau was at 24 Sussex. I was there — ask my wife. Nobody interviewed her about it. I was home in the same bedroom as my wife," Chrétien said. "She said, ‘Jean, sleep. You’re going to be working hard tomorrow and you have to go to Toronto.'"

Premiers had been huddled up in a hotel in Ottawa, and when Levesque crossed the river to a Hull, Que., hotel,  he asked that he be kept apprised of any developments. The next morning, Trudeau and eight premiers signed the draft deal.

"I have been stabbed in the back during the night by a bunch of carpetbaggers," Lévesque later wrote of the events of Nov. 4, 1981.

"When we quit the so-called Kitchen [Accord], I said, ‘You guys go sell it to the provinces. I have the bigger job — I have to sell it to Trudeau," he said.

Chrétien said he went to see Trudeau at 9 p.m. that night, and was back home by 11 p.m.

Chrétien declined to wade in to the present controversy over whether the Conservative government should be doing more to mark the 30th anniversary of the Charter of Rights and Freedoms. But he insists the charter has helped Canadians defend their rights against federal, provincial and municipal governments, and is an achievement worth celebrating.

"It is a Canadian accomplishment. The government of the day was a Liberal government. The negotiations with the provinces [were] long and we had to debate that in the committees of the House of Commons and the Senate and we had to go to London. It was a lot of work."

On Liberals and the NDP

Chrétien , who won three back-to-back majority Liberal governments between 1993 and 2003, also told Solomon the Liberal and NDP have a history of crossing over, and he said a merger of the left would not necessarily mean one party swallowing the other.

He also pointed out that NDP Leader Tom Mulcair was once a Quebec Liberal provincial cabinet minister and interim Liberal leader Bob Rae was a former NDP premier of Ontario.

"They have a Liberal as a leader," he said. "Some say he’s still a Liberal. And some still say that my friend Bob Rae is still an NDPer. The NDP have a Liberal, the Liberals have an NDP, but it’s not my problem."

Chrétien said he understands the anxiety about uniting the left. "Changes cause anxiety all the time. You just buy a new house and you’re anxious a little bit," he said.