The Conservatives' foreign affairs critic is calling the Chinese foreign minister's admonishment of a Canadian reporter on Wednesday "unacceptable," while a former ambassador to Beijing sees the visiting minister's "tantrum" as fallout from years of troubled relations with China.

The Conservatives' foreign affairs critic is calling the Chinese foreign minister's admonishment of a Canadian reporter on Wednesday "unacceptable," while a former ambassador to Beijing sees the visiting minister's "tantrum" as fallout from years of troubled relations with the communist country.

"China must learn from other countries that there are acceptable norms of behaviour when dealing with other nations," Conservative foreign affairs critic Tony Clement said in an interview with CBC News Thursday.

"I thought it was totally outrageous that he would come to Canadian soil and act in such a disrespectful way to a Canadian journalist asking a legitimate question.

"If we go to Beijing, as ministers or MPs, we were always told there are certain historical and cultural aspects of the Chinese that we have to be deferential to — and respectful of — and then he comes here and disrespects our values," he said. "So that was unacceptable."

Chinese Foreign Minister Wang Yi said it was "irresponsible" of a journalist from the web outlet iPolitics.ca to ask about human rights and the jailing of Kevin Garratt, a Canadian charged with espionage. 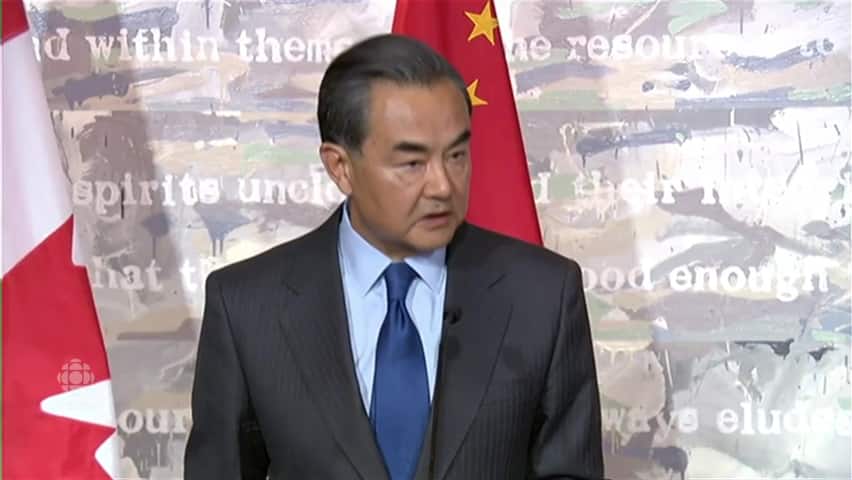 5 years agoVideo
3:03
Wang Yi was speaking through his translator after a meeting with Foreign Affairs Minister Stephane Dion in Ottawa 3:03

Wang appeared visibly angry as he delivered the scolding in the lobby of Global Affairs headquarters at a joint news conference with Foreign Affairs Minister Stéphane Dion. While the question was originally posed to Dion, Wang jumped in after Dion told the reporter he had raised human rights in China with the minister during their bilateral meeting.

"Your question is full of prejudice against China and arrogance … I don't know where that comes from. This is totally unacceptable," Wang said through a translator.

Dion did not respond directly to Wang's outburst.

Clement said he was going to give Dion "a little bit of leeway" for not interjecting, adding the whole affair was quite shocking.

"[Dion] didn't react in the moment, but there has to be some affirmation from the government of Canada that we value journalistic freedom and human rights. That's what the government has to relay to the Chinese."

He also said there is a troubling tradition in the Liberal Party of being "deferential" to communist leadership in China in the pursuit of bolstered trade relations.

Pierre Elliott Trudeau, the current prime minister's father, Clement noted, "had a passion for Mao Zedong, a man who was the originator of the deaths of millions of his co-citizens."

Former prime ministers Jean Chrétien and Paul Martin had rosy relations with the Chinese regime, Clement noted, and they often "floated Canadian values down the river" in the pursuit of a better commercial relationship.

(Justin Trudeau was also roundly criticized by Conservatives a couple of years ago when he made an eyebrow-raising remark about his admiration for China's "basic dictatorship.")

A spokesperson for Dion said the minister had nothing more to say about the incident and that his comments during the news conference speak for themselves.

"We're paying the price of an inconsistent approach during the Harper years," he said, noting the Conservative government publicly condemned the communist regime in Beijing only to cozy up to it on issues of trade before growing disillusioned.

Canada went largely "silent" on the diplomatic front in the latter years, the former ambassador said, as there was a disagreement around the cabinet table as to how best to deal with the Chinese.

Harper famously said he wouldn't sell Canada out to the "almighty dollar," while his government barred Chinese state-owned companies from further investment in the oilsands, raised concerns about Chinese cyber espionage and then backed away from trade negotiations, although Canada did reach an investor-protection agreement with Beijing.

"We're trying to re-engage with China … and it's now an even more powerful and assertive China, and of course it's going to be more difficult now," Mulroney said of the Liberal government's outreach.

China has taken an increasingly aggressive stance on issues of foreign policy, particularly after the ascendancy of Xi Jinping to president in 2012. He has prioritized building up the country's military, and rebranding the country as a "major power" on the international scene.

Xi has also launched an artificial-island building program in the South China Sea — despite territorial claims from other countries in the region — to expand its geographical footprint.

Chinese foreign minister not a 'softie'

Wang's aggressive remarks can also be interpreted as an attempt by him to curry favour at home with this more nationalistic regime, Mulroney said.

"They can be as rude and as tough as they need to be. You can't make it to the senior levels without putting the visor down and doing what's necessary. Even the most gracious people … they drop the weights and they can really be tough," he said, adding there is a perception that members of China's foreign service are often seen as the weakest members of the Chinese state apparatus.

"He would not want to be seen as a softie back in Beijing," added Mulroney, who is now a senior fellow at the Asia-Pacific Foundation of Canada and at the Munk School of Global Affairs.