'Canada does not want to be seen as a safe haven for fugitives,' says Daniel Jean

Then-deputy minister Daniel Jean offered that advice in a 2015 briefing note to the former Conservative government prior to his appointment in May as Prime Minister Justin Trudeau's national security adviser.

"Canada does not want to be seen as a safe haven for fugitives and it is in Canada's interest to have such persons removed," said the note, obtained by The Canadian Press under the Access to Information Act.

In his new role with the Liberal government, Jean was in Beijing last week for the start of a new "high level dialogue" between Canada and China on national security and the rule of law — talks that include breaking ground on an extradition treaty.

Word of those talks sparked opposition charges Tuesday that the Liberals were abandoning their human rights principles. Two major human rights organizations, Amnesty International and Human Rights Watch, questioned Canada's pursuit of an extradition deal, saying it doesn't square with China's rights record, including its widespread use of the death penalty.

The controversy comes ahead of Wednesday's arrival in Ottawa of Chinese Premier Li Keqiang for talks with Trudeau aimed at deepening economic co-operation, following Trudeau's first to China three weeks ago.

China has mounted a vigorous international campaign to hunt down alleged economic criminals on foreign soil it says have absconded with millions of dollars of assets. Human rights advocates say the campaign is a smokescreen for China's real intent: to track down and silence political dissidents who have fled abroad.

In the briefing note, Jean further describes Canada's response to China's 2014 campaign, dubbed "Operation Fox Hunt," an outgrowth of President Xi Jinping's anti-corruption campaign in which he "vowed to swat down both 'tigers' and 'flies,' regardless of their level, in efforts to clean up the Communist Party in China."

The targets were "corrupt public officials and private citizens alleged to have committed economic crimes such as financial fraud against persons, businesses and banks." The Chinese government estimated in 2014 that 208 people had fled with an estimated $1.93 million.

"Over 70 police teams were sent overseas to hunt down these economic fugitives, resulting in the capture of individuals spread out over 69 countries and regions." The heavily censored memo doesn't say if any are from Canada.

Beijing circulated a notice to the Chinese diaspora abroad "encouraging fugitives to surrender" in return for lighter sentences, Jean writes.

"In the notice, family members and friends of overseas fugitives were advised to encourage their loved ones to surrender."

Trudeau, who was in New York for a speech at the UN General Assembly, indicated Tuesday that Canada would not be compromising its own values for the sake of diplomatic expediency. 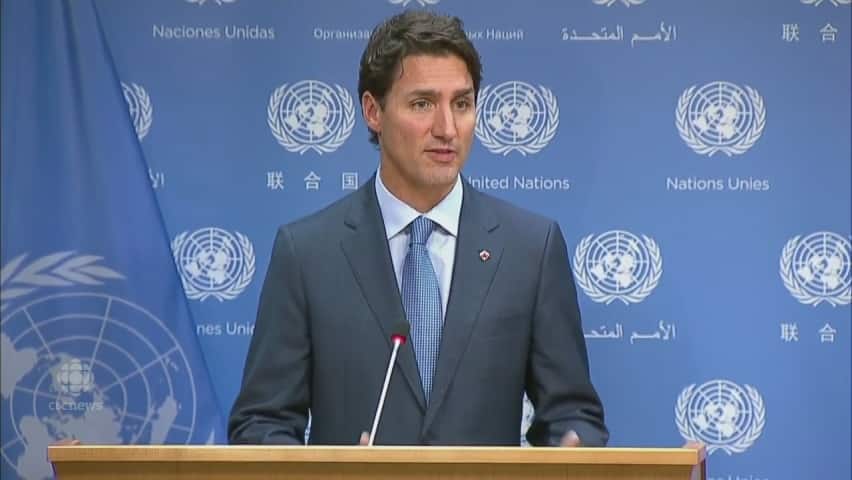 Trudeau on extradition to China

"Extradition is certainly one of the things the Chinese have indicated they wanted to talk about. But as everyone knows, Canada has very high standards in terms of extradition treaties, in accordance with our values," he told a news conference.

"But we're happy to have a high-level security dialogue that will allow Canadian and Chinese officials to talk about a broad range of issues."

The standard rules of the road are that you cannot forcibly return anyone to a country where they face a well-founded fear of persecution, or ill-treatment.- Sophie Richardson

"It's impossible to imagine how you would have an extradition treaty that would line up with Canada's obligations to not send people to face the death penalty," Neve said in an interview.

"It's very clear that China regularly seeks the return to China of individuals who are wanted for political reasons or religious reasons."

Sophie Richardson, China director for Human Rights Watch, said it is "peculiar" for Canada and to be pursuing an extradition treaty with China, because it is one of three countries — including the United States and Australia — that have rebuffed Beijing's requests in the past.

"I think China's particular interest in pushing this with Canada at the moment is to then be able to say to the U.S. and Australia, 'They did it, why won't you?"'

With or without a treaty, "the standard rules of the road are that you cannot forcibly return anyone to a country where they face a well-founded fear of persecution, or ill-treatment," she added.

During question period Tuesday, Interim Conservative leader Rona Ambrose told the House of Commons "that our openness to China should be about encouraging them to adopt our values for human rights, as opposed to us giving into theirs."

"With this dialogue, we will be able to push human rights," he replied. "And when it comes to agreements like this, we will be pushing the issue of the death penalty because human rights is an integral part of our government's mandate."