Canada's goal to see its trade agreement with the European Union take flight by July 1 now appears grounded by a second series of concerns, this time from the pharmaceutical industry.

Canada's goal to see its trade agreement with the European Union take flight this summer now appears grounded by a second series of concerns, this time from the pharmaceutical industry.

The concerns, which at first seemed to impose only minor delays, now appear significant enough to require engagement at the highest levels on both sides of the Atlantic.

Justin Trudeau spoke to the president of the European Commission, Jean-Claude Juncker, by telephone Tuesday and "urged proceeding" with a provisional application of the deal as soon as possible "so that its benefits can be realized," a statement from the Prime Minister's Office says.

Most of the Comprehensive Economic and Trade Agreement (CETA) was supposed to be provisionally applied by July 1, but it snagged on a dairy dispute, and now other dissatisfied customers are piling on.

"There needs to be a resolution to that difference of opinion."

Asked why implementation was taking so long, Trudeau told reporters at an event Toronto Wednesday he understands that some people are getting impatient.

"We are right now moving forward in the last steps for implementation. I'm very much looking forward to crossing the finish line on this one," he said. 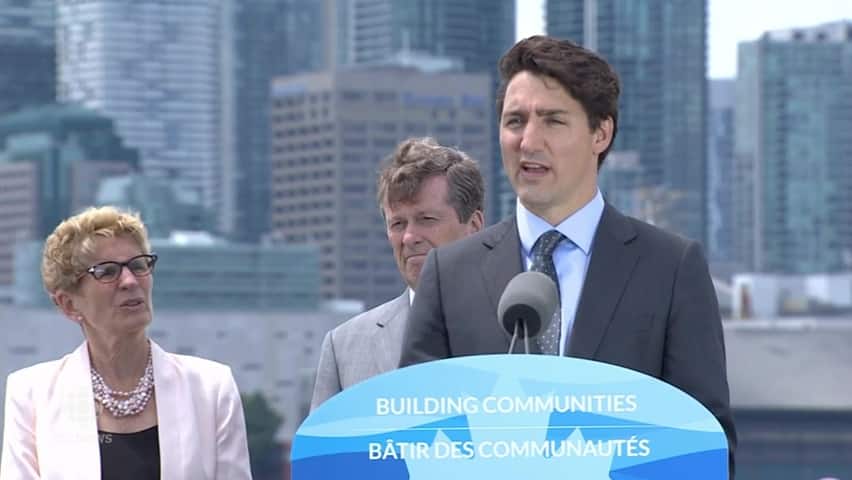 3 years ago
1:34
PM Justin Trudeau responds to the delays at implementing the free trade deal between Canada and the E.U. 1:34

CBC News reported earlier this month that some Europeans don't like how Canada plans to allocate its cheese import quotas.

But now CBC News has learned that the European pharmaceutical industry doesn't want the EU to set a date to start implementing the deal until Canada publishes and consults on some regulatory changes promised to generic drug manufacturers, and some member states are expressing these concerns to the European Commission.

Persistent legal confusion in Europe over whether the intellectual property measures affecting pharmaceutical patents can be applied without individual member countries' ratification may also be prompting some to want to hit pause.

At the time an agreement in principle was reached on CETA in 2013, the Canadian Generic Pharmaceutical Association said it had received "written assurances" from the Canadian government that it would end dual-track litigation, a practice in which brand-name pharmaceutical companies can sue generics multiple times on the same patents, adding to the cost and risk of bringing drug alternatives to market.

The generic industry said the move would reduce the burden on the courts, end patent disputes faster and make investments in the generic drug industry more attractive.

But the CETA text itself doesn't make this change. It was a separate pledge to placate the generic drug industry because other parts of the deal may benefit brand-name pharmaceuticals.

During the negotiations, Canada agreed to extend the terms of pharmaceutical patents for up to two years, bringing Canada closer in line with the EU, which extends patents for up to five years. Canada was the only G7 country that didn't provide extensions to offset delays from clinical trials and bureaucratic reviews.

The Europeans also sought and received a new right of appeal in Canada's patent review process.

Roughly one-quarter of Canada's bill to implement CETA, C-30, dealt with changes to intellectual property rules for pharmaceuticals. But the end of dual-track litigation had been expected separately, in the form of new regulations published in the Canada Gazette.

Similar to European fears in the cheese import dispute, a perceived lack of transparency on Canada's part seems to be fuelling concerns.

"Tied as they are to CETA implementation, the regulatory changes to end dual-track litigation will come into force when the agreement is provisionally applied," the department said in a statement emailed to CBC News Thursday. "Over the last 2.5 years, consultations have been held with industry stakeholders and legal experts, including on the regulations, with input fully considered."

But the government hasn't revealed what the new regulations to end dual-track litigation look like, and this is making European brand-name drug manufacturers nervous.

Innovative Medicines Canada, which represents Canada's brand-name pharmaceutical companies, told CBC News in an email that it has "has significant concerns regarding the changes and their implementation, "most of which are not required under CETA," but it cannot discuss them because it is "bound by government non-disclosure agreements."

The changes "may have the effect of complicating and destabilizing pharmaceutical patent litigation in Canada once implemented," the statement says.

If Canada is forced to consult more broadly, CETA's implementation could be pushed back into 2018.

Langrish remains confident CETA will eventually come into force. But it's getting harder to anticipate where the next delay will occur, and that's becoming more and more of a concern for businesses trying to make investment decisions.

"We really don't know what the timetable is anymore," he said. Despite how precedent-setting the agreement is, no one imagined it would take so long, he said, and there's been a "bit of a black hole" of information from the federal government since C-30 passed.

"I think they have to tell us why they missed this (July 1) target," he said.

Canada's chief negotiator with the European Union, Steve Verheul, was tapped for a central role in Canada's upcoming renegotiation of the North American Free Trade Agreement, expected to get underway in mid-August.

But recently, Verheul's been back in Brussels with International Trade Minister François-Philippe Champagne, trying to resolve the issues with things like cheese and pharmaceuticals and bring CETA to fruition. 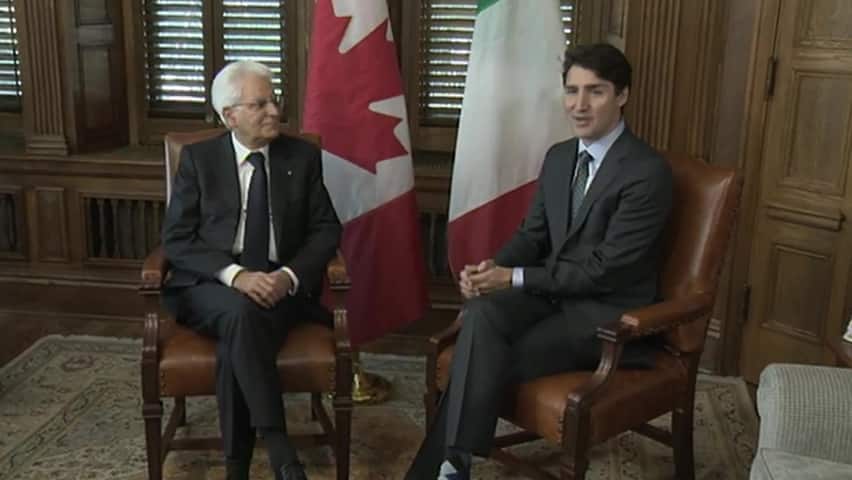 3 years ago
1:34
PM Justin Trudeau welcomes Sergio Mattarella, President of the Italian Republic, who is in Canada for a week long visit. 1:34

Adam Taylor, who worked for former Conservative international trade minister Ed Fast when negotiations first concluded with the Europeans, says when the Liberal government moved to reopen some aspects of the deal last year it sent a signal to everybody who had grievances to go back and raise a ruckus again because someone would listen.

Conservatives never wanted to reopen it, said Taylor, who's now an independent trade consultant with Export Action Global. "We felt that once you popped the hood on this thing, there's a thousand little parts ... if you start pulling on one you could end up pulling on 10 more."

Now that another deadline's been blown, he said, "you need to just shred the calendar."