Responding to critics who say many Canadians are falling through cracks in the emergency COVID-19 benefit plan, Prime Minister Justin Trudeau today said more help is on the way for students, those working reduced hours due to the pandemic and struggling businesses.

Responding to critics who say many Canadians are falling through cracks in the emergency COVID-19 benefit plan, Prime Minister Justin Trudeau today said more help is on the way for students, those working reduced hours due to the pandemic and struggling businesses.

During his daily media briefing, Trudeau said 240,000 people already have applied successfully for the Canada emergency response benefit (CERB) — which opened to applications at 6 a.m. ET today — reportedly without a hitch.

By 6:30 p.m. Monday, Minister of Employment Carla Qualtrough's office confirmed the number of CERB applications had increased to 642,000.

Qualtrough's office also said the federal government has received 3.18 million employment insurance and CERB applications since March 15 and has processed 2.2 million of those.

But he acknowledged that some people who should qualify for the aid are not getting it.

Trudeau said there will be adjustments to the program in the coming days to include people such as gig workers, contractors and volunteer firefighters who work 10 or fewer hours per week. He also said there would be support for those who continue to work but are making less than they would through CERB, such as home care workers or people caring for vulnerable seniors in long-term care facilities.

"You need support now, and work is underway to get it to you as soon as possible," he said.

"For people in all of these situations, we see you, we're going to be there for you and we're working as hard as we can to get you the support you need." 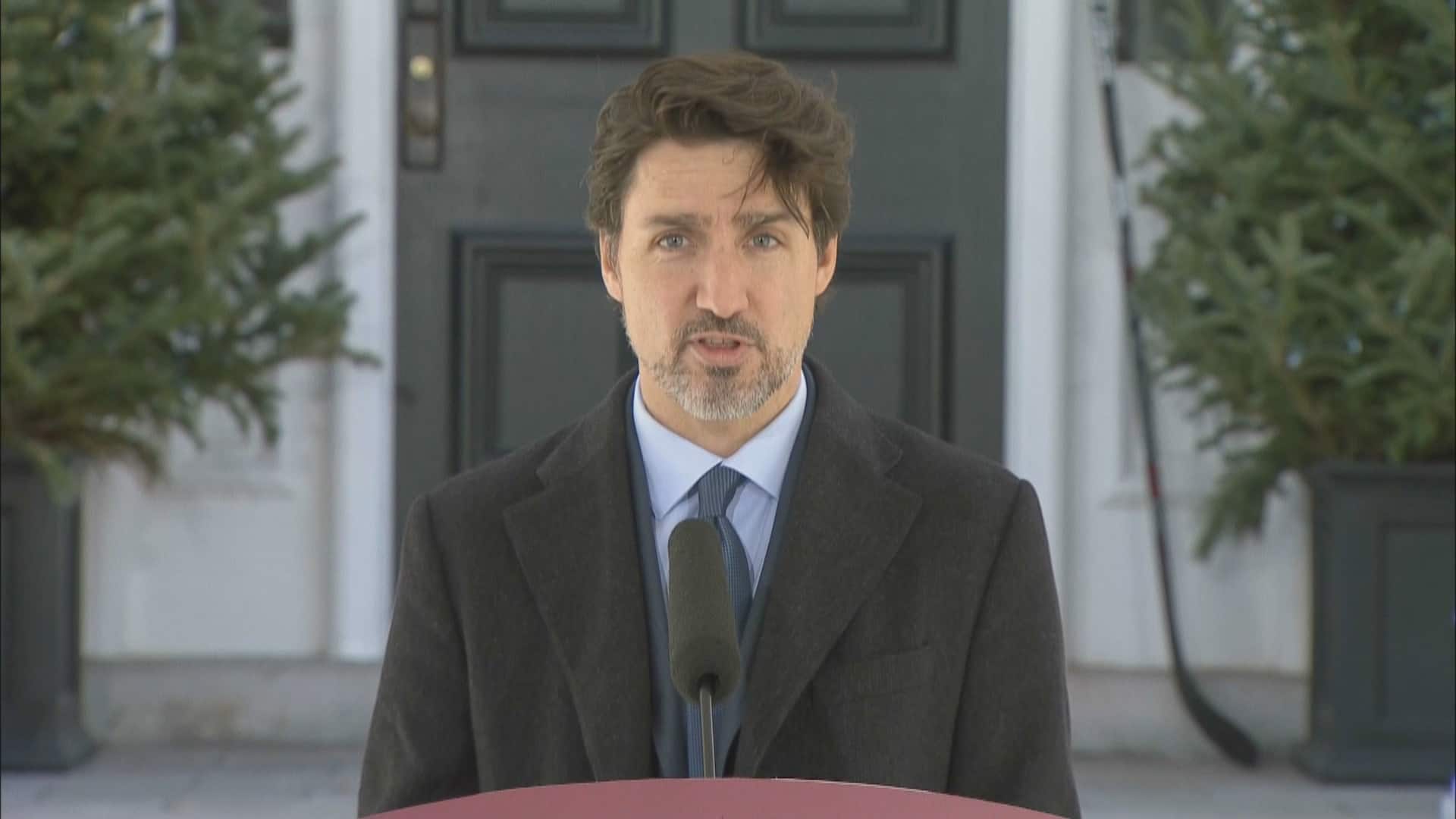 Trudeau says more Canadians will be covered by CERB

11 months ago
1:46
Prime Minister Justin Trudeau says the government is looking at ways to extend COVID-19 emergency benefits to students and those working reduced hours due to the pandemic. 1:46

Qualtrough's office said Monday that everything seemed to be going smoothly in the first few hours the online portal was open for CERB applications, which are being managed by the Canada Revenue Agency.

Hundreds of thousands of applications are expected to flood the system in the coming week, and the government says the system is prepared to handle millions of claims.

During a news conference in Regina Monday, Conservative Leader Andrew Scheer said the government must find ways to break down barriers for certain people, including those who don't qualify because they work a small number of hours each week.

"We need an assistance program that will allow workers to meet market needs," he said. 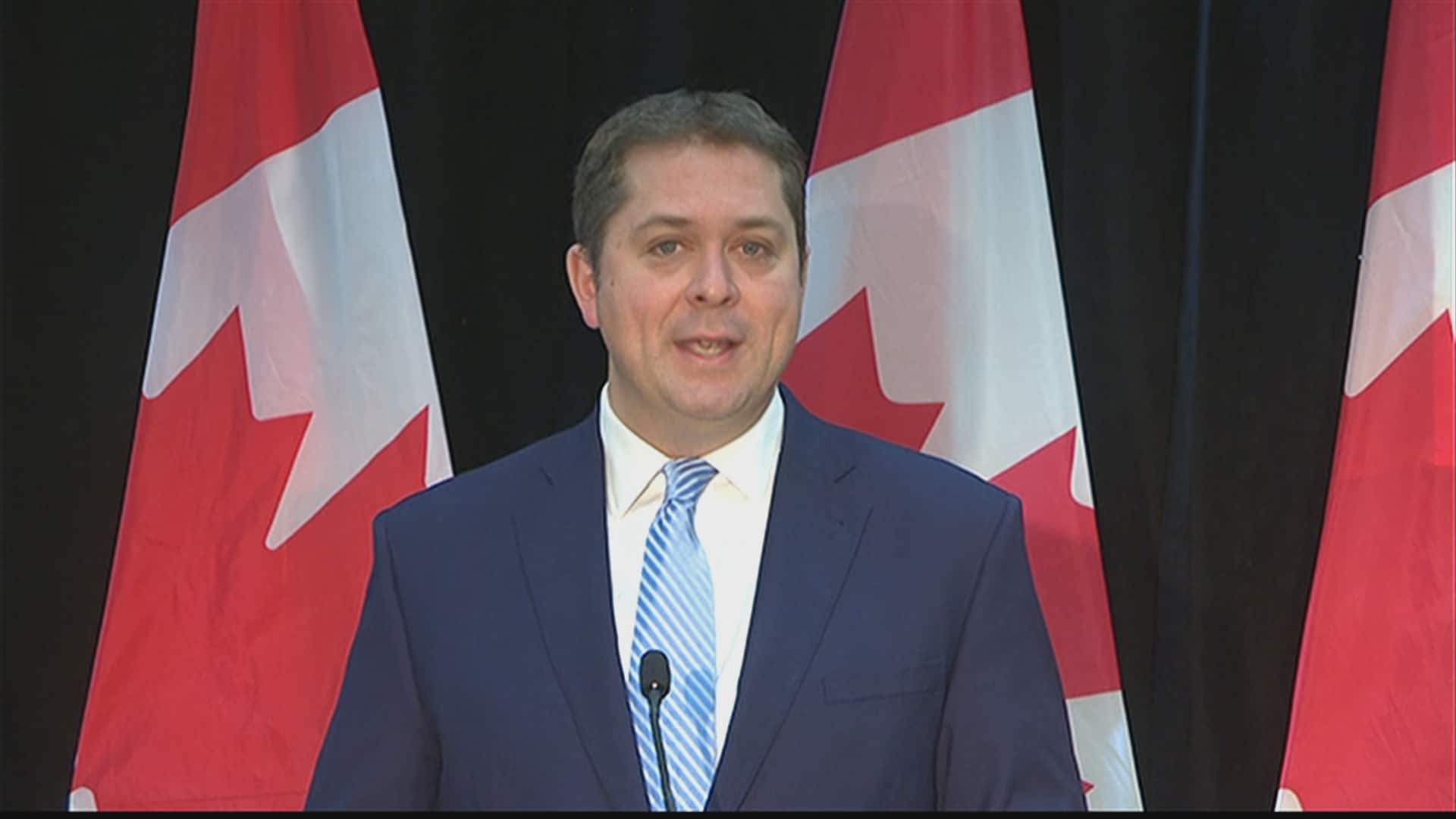 Scheer on reconvening Parliament during Covid-19

11 months ago
0:58
Conservative Leader Andrew Scheer says the best place to hold the government to account during the COVID-19 crisis is in the House of Commons. 0:58

Current eligibility criteria require a recipient to have lost all income for at least 14 consecutive days in the last month. After the initial month, they must have no source of income.

That means someone who works even dramatically reduced hours each week does not qualify.

To be eligible, someone also must have been working before being compelled to stop because of COVID-19 restrictions, which means full-time students do not qualify. Trudeau said Sunday the government is looking at ways to address that, including direct income supports.

Scheer said the Conservatives also have been hearing complaints about the planned wage subsidy program, which will give employers up to 75 per cent of an employee's salary. It's expected to be up and running in three to six weeks, but Scheer said that is too long for businesses teetering on the edge to wait.

The government has said it will recall Parliament soon to pass legislation on the wage subsidy. Scheer said he has not yet heard when that would occur, but suggested the House of Commons should hold regular sittings with a reduced number of MPs in order to hold the government to account. 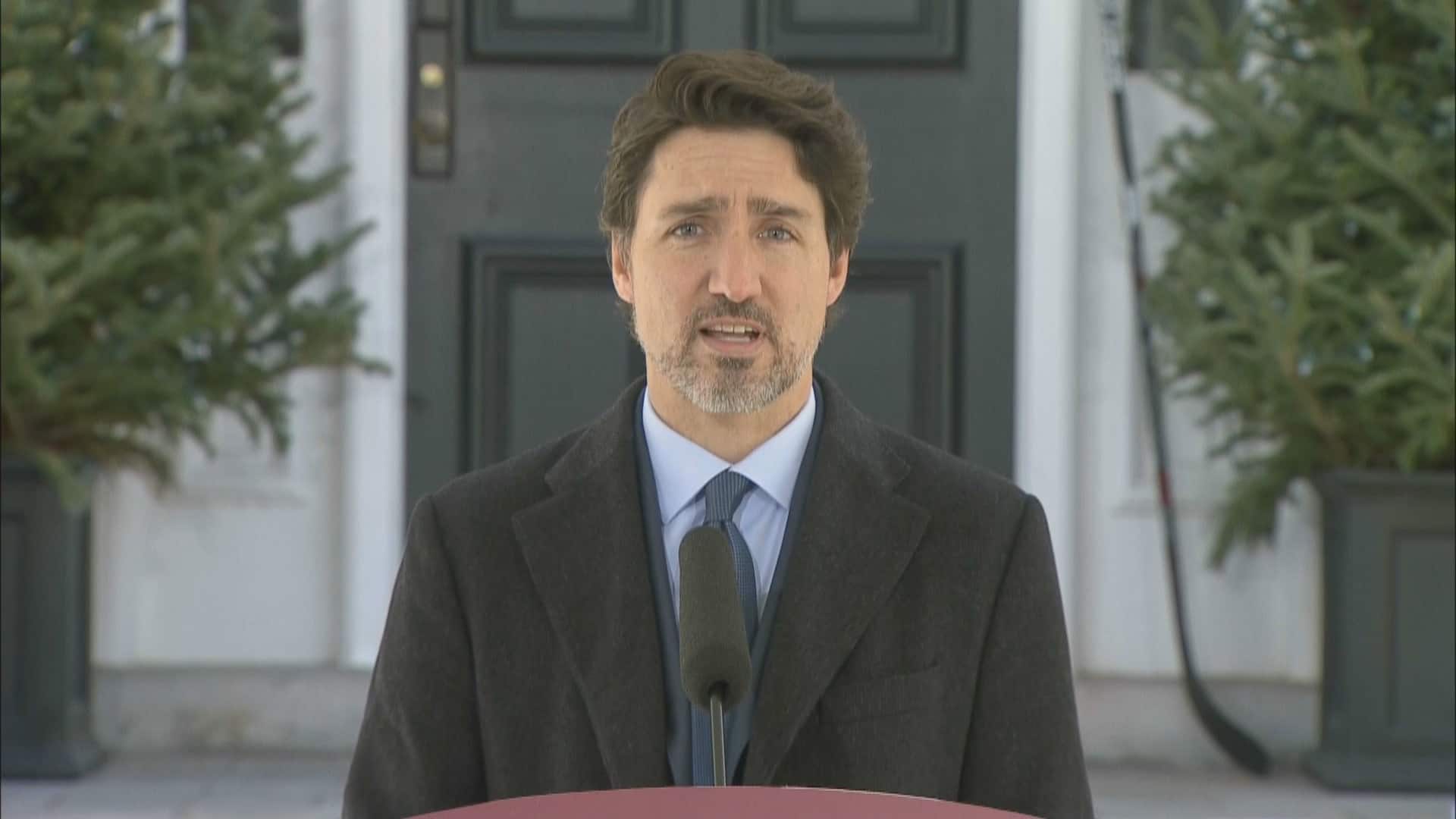 11 months ago
1:14
Prime Minister Justin Trudeau says he's looking forward to seeing a reduced Parliament reconvene in the coming days to pass legislation to help employers affected by COVID-19, and is looking at the possibility of bringing together a virtual Parliament. 1:14

"We've already shown to Canadians that we can have a group of members of Parliament, a reduced roster, that can follow the directions of public health officials while at the same time fulfilling our responsibilities as parliamentarians," he said.

"We believe that the best place to have that accountability, to ensure that we're getting the best decisions for Canadians, is in the House of Commons. Other legislatures around the country are finding ways to maintain sittings to do exactly that."

A significantly scaled-down group of MPs and senators gathered in Ottawa last month to pass legislation on a COVID-19 aid package worth about $107 billion.

Trudeau suggested that MPs could do even more of their work virtually during the pandemic, so that parliamentarians from across the country "can make themselves heard."

"It can't be just about folks who have proximity to Parliament or the ability to get here," he said. "We need to look at ways that our democracy and institutions can stay strong and embody and fulfil the functions that Canadians need them to.

"That's why I'm very much looking forward to discussions with other parties and experts on how we can continue with our institutions even in this difficult time."

Kwan cited the case of one constituent in her riding, a physiotherapist, who does not qualify because he is still providing very limited service to patients rehabilitating after surgery. 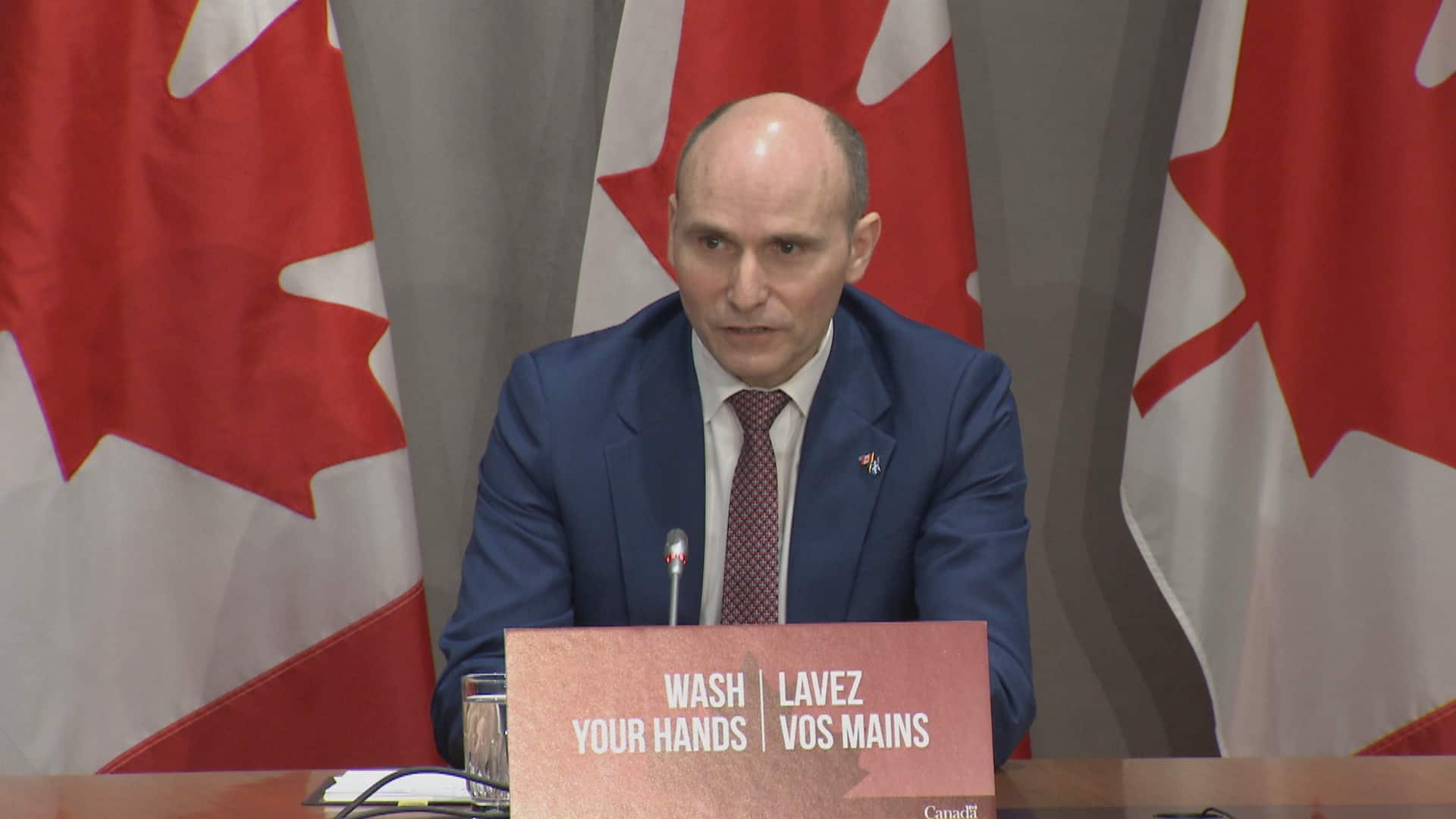 11 months ago
1:45
Treasury Board President Jean-Yves Duclos spoke to reporters on Parliament Hill on Monday 1:45

The NDP has called for a guaranteed income of $2,000 per Canadian adult, plus an extra $250 per child.

The government's wage subsidy proposal is also facing some criticism.

By covering up to $847 a week per employee, the goal of the proposed wage subsidy program is to keep people on the payroll to facilitate a quick rebound when the pandemic subsides.

But a survey carried out by the Canadian Federation of Independent Business (CFIB) found that many members are skeptical it will help them retain staff.

The CFIB is calling on the government to repeal a requirement that businesses show a 30 per cent decline in revenue compared to the same month last year, and to make sure the program covers new or rapidly growing firms.

Trudeau said today that Finance Minister Bill Morneau will have more updates on the program soon.

"Here's the bottom line. Whatever your situation is, we are working to get you the help you need," he said.