The Trudeau government is moving ahead with its plan to put a price on carbon emissions. In the process, it's directly taking on federal Conservatives and the four premiers who oppose carbon pricing by promising to give the money back to taxpayers in those provinces.

The Trudeau government is moving ahead with its plan to put a price on carbon emissions. In the process, it's directly taking on federal Conservatives and the four premiers who oppose carbon pricing by promising to give the money back to taxpayers in those provinces.

"Starting next year, it will no longer be free to pollute anywhere in Canada," the prime minister said today. "And we are going to help Canadians adjust to this new reality."

That help will take the form of a direct rebate to residents of Ontario, Saskatchewan, Manitoba and New Brunswick in their tax returns next spring.

The amounts will differ in each province, but the underlying message remains the same. The government says most families will get back slightly more starting next year than what Trudeau says this new "price on pollution" will cost them in higher prices for fuel and other necessities.

Trudeau's price on pollution is, of course, a straight up "carbon tax" to his Conservative opponents, who dismiss the rebates as nothing more than a vote-buying scheme in advance of the next fall's election.

The bottom line: money in pockets

Call it a price on pollution or call it a tax on everything — either way, politicians on both sides of the debate know that the best way to earn people's votes is by leaving more money in their pockets.

In other words, this is an argument only one side can win.

Trudeau acknowledged as much in making his highly-anticipated announcement at a college in Premier Ford's own Toronto-area riding.

"Let me be very clear. The government of Canada will return all of the money collected through pricing pollution back to Canadians," he said. "Every nickel will be invested in Canadians in the province where it was raised."

The Liberals learned the hard way back in 2008 that running a campaign around a promise to introduce a new tax is a recipe for electoral failure.

Stéphane Dion was pummeled in that campaign for his inability to explain that his so-called Green Shift would be revenue-neutral. The Conservatives won that election and Dion was soon gone as Liberal leader.

But that was then. A few things have changed since.

For starters, Trudeau is a better communicator than Dion. And climate change is a problem Canadians understand better today than they did ten years back. They've witnessed the devastating aftermath of the severe storms, droughts and forest fires that scientists attribute, at least in part, to a warming planet.

The Conservatives also face a different challenge this time around. Former leader Stephen Harper did introduce his own climate plan but no strategy to meet the stated goal of reducing emissions by 30 per cent below 2005 levels by 2030.

The Liberals now have a strategy — based on those same emission targets set by the Conservatives.

Could Conservative voters be convinced?

While polls don't show climate change as the number one issue for voters, it does rank in their top five. CBC polling analyst Éric Grenier said the numbers also suggest that even some Conservative voters could be persuaded to vote Liberal if the carbon pricing system is truly revenue-neutral.

"So if Liberals can sell that it won't hurt your pocketbook, it can appeal even to fence-sitting Conservatives," Grenier said.

Liberals and Conservatives spent most of today arguing about how much the government's climate plan will cost taxpayers. New Democrats and the Green Party spent their time arguing that the Liberals' plan (and the Conservatives lack of one) will leave Canada far short of meeting the emissions reduction targets agreed to three years ago at the UN climate change conference in Paris. 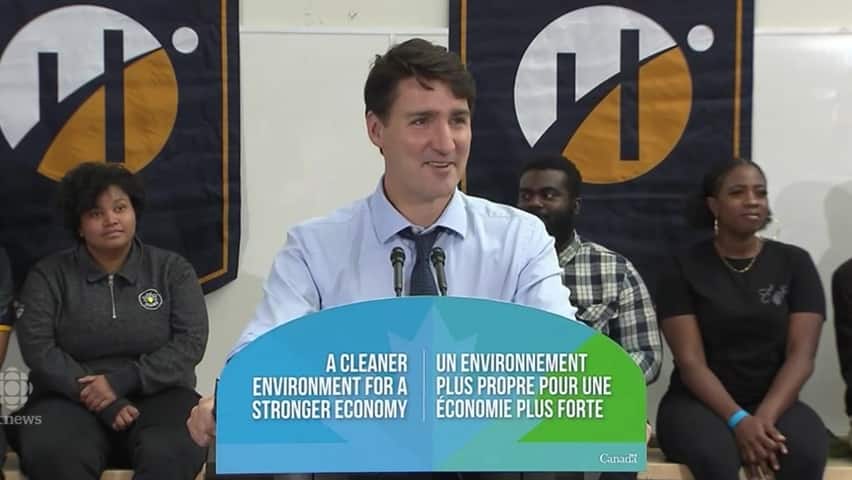 Trudeau says he is not buying votes with carbon rebates

2 years agoVideo
2:09
PM Justin Trudeau says he is not buying votes for next year's federal election by giving rebates to families in advance of the carbon price implementation in Ontario, Saskatchewan, Manitoba and New Brunswick. 2:09

"This is a good decision. But it's half of what needs to be done if we are going to respond to science and meet the Paris target of holding the global average temperature increase to 1.5 degrees Celsius," Green leader Elizabeth May told reporters.

The Conservatives have been promising to release a climate plan of their own for months now. Scheer insisted again today that it's coming and it won't include a tax.

May said the science is clear: pricing carbon is the most effective way to curb emissions.

But questions of 'effectiveness' are only going to make up part of this debate. Many voters will be asking themselves what the plan will cost them, personally.

Hence, the rebates. The Liberals are counting on delivering them just as the new price on carbon emissions kicks in — a suitable incentive (they hope) for voters in the four affected provinces to buy into the plan.