China formally arrests Spavor and Kovrig, accuses them of spying

The Canadian government is calling out Beijing after Chinese authorities formally arrested two Canadians, accusing them of crimes related to national security.

Michael Spavor, Michael Kovrig have been detained in China for months

The Canadian government is calling out Beijing after Chinese authorities formally arrested two Canadians, accusing them of crimes related to national security.

Businessman Michael Spavor, who worked in North Korea, and former diplomat Michael Kovrig were picked up separately in December, shortly after Canada arrested Huawei chief financial officer Meng Wanzhou in Vancouver. They were recently arrested, according to both Chinese and Canadian officials.

"I think one of the things we see increasingly around the world is that the Chinese government is not following the same kinds of rules and principles that the large majority of democracies follow in regards to rules-based order, in regards to international relations," Prime Minister Justin Trudeau said during a media appearance in Paris Thursday.

When asked if he'd call Chinese President Xi Jinping personally to protest the arrests, Trudeau said Canada is focused on "things that are going to help the Canadians being detained." 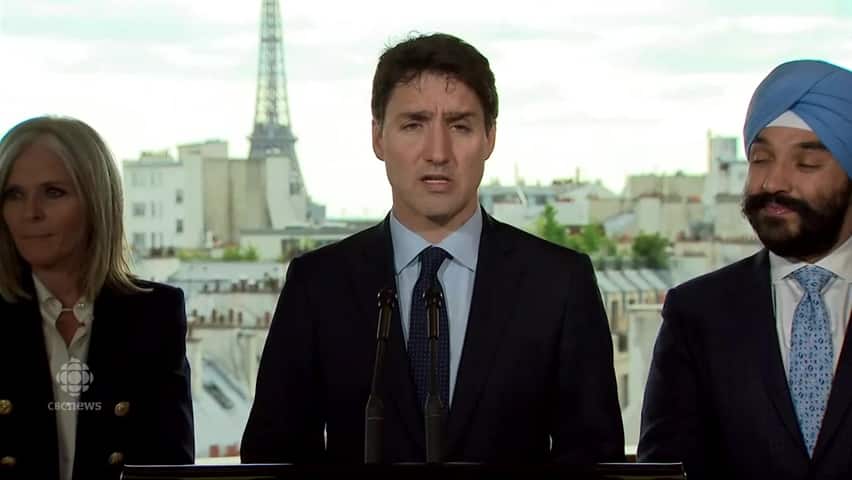 2 years ago
0:43
Prime Minister Justin Trudeau says the Chinese government is not playing by "the same kind of rules" after Chinese authorities formally arrested two Canadians, Michael Spavor and Michael Kovrig. Spavor and Kovrig have been detained in China since last December. 0:43

"We reiterate our demand that China immediately release Mr. Kovrig and Mr. Spavor," said a department spokesperson in a statement.

"Canadian consular officials have made recent consular visits to the two men and will continue to provide consular services to them and their families. Due to the provisions of the Privacy Act, no further information can be disclosed."

Chinese foreign ministry spokesperson Lu Kang told a daily news briefing in Beijing on Thursday morning that Kovrig — who works for the International Crisis Group (ICG), a non-governmental organization which focuses on conflict resolution —  is suspected of gathering state secrets for other countries, while Spavor is accused of stealing and illegally sharing state secrets.

He didn't say when the men will be formally charged. According to the Canadian government, people can be detained for up to 13½ months after an official arrest in China before formal charges are laid.

China has repeatedly demanded the release of Meng, who now faces extradition to the U.S, and has reacted angrily to extradition proceedings against her in a Canadian court.

Under Chinese law, officials can detain people for up to six months, meaning Beijing had until June 10 to act.

Questions about the death penalty

Canadian diplomats have been allowed to visit the two men in detention.

They could soon face trial, though it's not clear when that might happen.

Guy Saint-Jacques, one of Canada's former ambassadors to China, said their fates are likely already sealed.

"Once you are formally accused in the Chinese system, you are found guilty in 99.9 per cent of the cases. What we'll have to watch now is what is exactly the nature of the accusations and whether the penalty could include the death penalty," he said.

While Canada says China has made no specific link between the detentions of the two men and Meng's arrest, experts and former diplomats say they have no doubt China is using their cases to pressure Canada.

"The Chinese leaders have probably come to the conclusion that the extradition process of Mrs. Meng is going to last likely a long time and therefore they have decided to up the ante," said Saint-Jacques.

Kevin Garratt, a Canadian who was detained for nearly two years in China, said Kovrig and Spavor are likely "going through a lot of fear right now."

Garratt said he was interrogated for hours every day and food only came to his cell about two-thirds of the time.

"Everything is twisted so that what was black is turned white ... it is very, very tiring," he said. "What really gave me hope was having my Bible with me the whole time, being able to pray and knowing other people were praying for us and really thousands of people around the world. Which I hope people would be doing today."

In March, China accused Spavor and Kovrig of involvement in stealing state secrets.

She was arrested at Vancouver's airport on a U.S. warrant and is fighting extradition on charges that she conspired to defraud global banks about Huawei's relationship with a company operating in Iran.

U.S. President Donald Trump on Wednesday signed an executive order barring U.S. firms from using telecom equipment made by companies deemed to pose a national security risk. The order did not specifically identify any country or company, but U.S. officials have previously labelled Huawei a "threat" and lobbied allies not to use Huawei network equipment in next-generation 5G networks.

Meng was released from jail in December on $10 million bail and must wear an electronic ankle bracelet and pay for her security guards. She has been living in a Vancouver home.

The formal arrest of the Canadians was first reported by the Globe and Mail on Wednesday.

Another Canadian in China, Robert Schellenberg, was sentenced to death in a drug case following Meng's detention. His case is being appealed.