As Canadian troops in Latvia unpack and get to know their new surroundings, they're also dealing with some skepticism from Latvians about how necessary it is to have them there.

As Canadian troops in Latvia unpack and get to know their new surroundings, they're also dealing with some skepticism from Latvians about how necessary it is to have them there.

The first wave of more than 450 Canadian military personnel has arrived in the tiny Baltic nation as part of a NATO mission to deter any potential aggression from Russia.

The Canadian deployment is open-ended and could last for years.

"Our position here is entirely defensive and proportionate in response to Russian actions," said Lt.-Col. Wade Rutland, the commander of the Canadian battle group that's at the centre of the Latvia deployment, which also includes soldiers from six other countries.

In response to Russia's take over of Crimea in 2014 and an ongoing conflict with Russian-backed rebels in eastern Ukraine, NATO ordered several thousand multi-national troops to Latvia, Estonia and Lithuania, as well as eastern Poland.

Latvia's government has enthusiastically welcomed the Canadians, including giving them red and white friendship ribbons for their uniforms.

Not necessary 'to annoy the Russians'

However, many Latvians are doubtful that NATO's "enhanced forward presence", as it's known, will alter the dynamics of the region in any significant way.

"The fear is minimal," said Rimants Māceikis, who was shopping Sunday at Riga's central market.

"We are part of NATO and I don't think Russia would dare hurt us."

Nonetheless, he told CBC News, the deployment adds a measure of reassurance.

Under article 5 of the NATO agreement, an attack on a member state compels other members of the military alliance to come to its aid, regardless of whether alliance troops are stationed there.

Other Latvians view the arrival of NATO battle group as unnecessarily provocative.

"I don't think it's necessary to annoy the Russians," said Kaspars Cabulis, who was out shopping with his wife and baby.

"They're going to do their exercises; we're doing our exercises. This [deployment is] not necessary. This is all normal."

Latvia has the largest Russian speaking population of any the three Baltic countries, with over a third of the country speaking Russian.

There are many close family and cultural ties between the countries, so in places there's resistance to the idea that Russia is a country that needs to be defended against.

"I don't think there's any kind of threat," said Olga Silo, a Russian speaker, who sells cucumbers at the market.

"I think Russia gave Latvia its freedom so it won't take Latvia back now," she explained, referring to the peaceful break-up of the former Soviet Union when Latvia regained its independence in 1991.

Canadian commanders agree the likelihood of a shooting war here is very remote, but insist their presence is part of the reason why.

"I would say that the threat of a conventional ground force invasion, I would say is not high largely because with NATO deciding at the Warsaw summit to put actual soldiers on the ground, it sends a really strong message of deterrence," said Lt.-Col. Rutland.

Rutland says one of the key goals of the Canadian mission is to engage Latvians through things like community events, training with their troops, and working closely with the country's government.

"I guess I would say that if there are some Latvians who are not for our presence here, we are here to defend all Latvians regardless of what you think of us."

'For me this mission is important'

Meanwhile, at the Canadian military compound about 45 minutes northeast of Riga, newly arrived troops continue to fight jetlag and acclimatize to their new surroundings.

Most will start off sleeping in windhavens, or heavy-duty tents, until permanent dwellings are completed later in the summer.

Sgt. Anna MacAoidh, who's originally from Winnipeg, says she's been waiting for most of her 11 year military career to practice her telecommunication skills on an overseas assignment.

"For me this mission is important," she told CBC News, as she set up her bed and gear.

"I wanted to contribute something to Canada, and I think this mission is worthwhile and I'm really excited to be in Latvia." 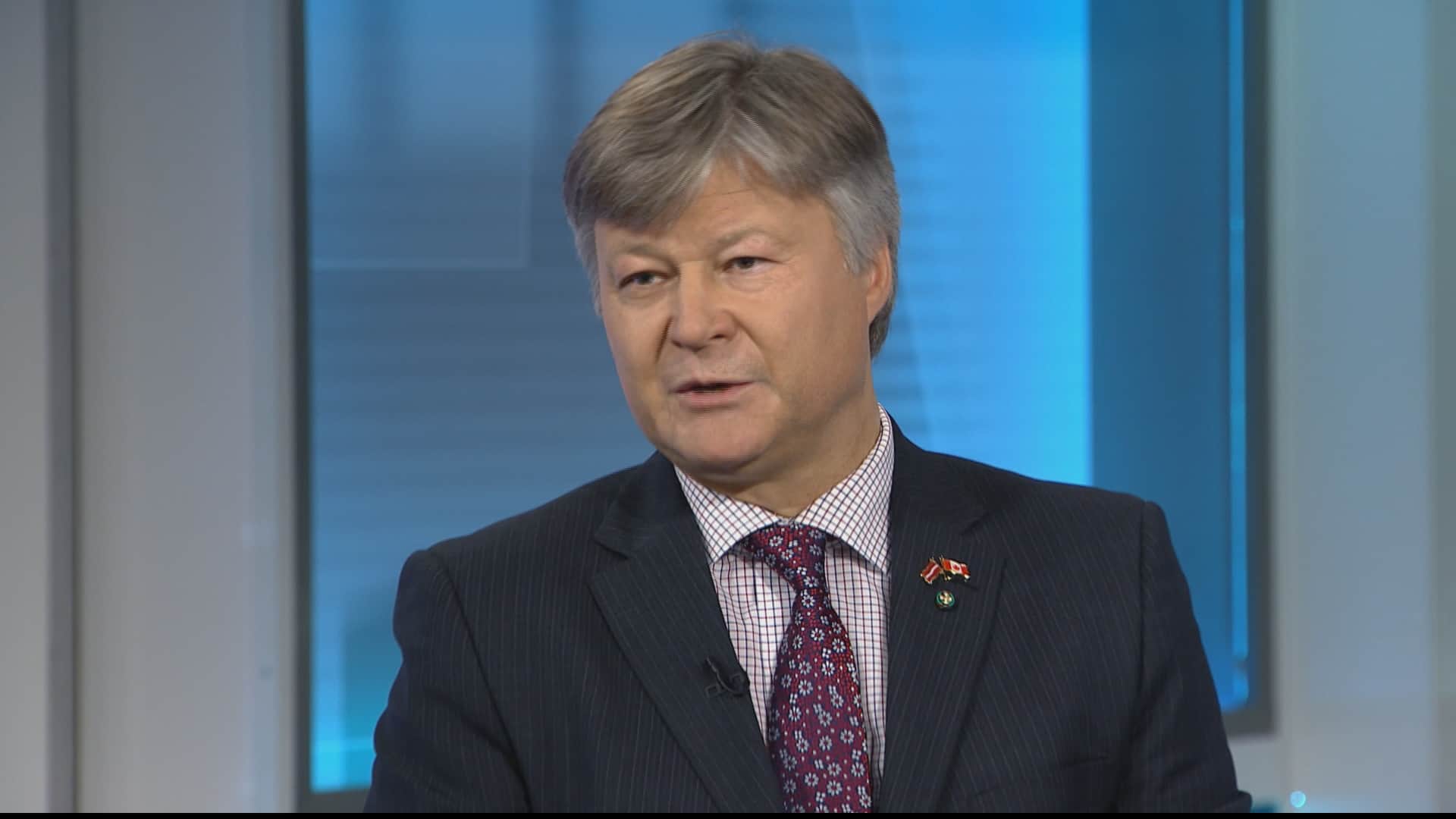 4 years ago
5:51
'It was important to say thank you to the troops and their family members,' says Latvia's Ambassador to Canada Karlis Eihenbaums. 5:51
CBC's Journalistic Standards and Practices|About CBC News