Finance Minister Bill Morneau announced Wednesday a plan to backstop much of the Canadian economy through wage subsidies to prop up struggling businesses — and the workers they employ — during the COVID-19 crisis.

Finance Minister Bill Morneau announced Wednesday a plan to backstop much of the Canadian economy through wage subsidies to prop up struggling businesses — and the workers they employ — during the COVID-19 crisis.

The wage support program, called the Canada emergency wage subsidy (CEWS), is designed to discourage companies from laying off workers at a time when social and economic life has ground to a halt, crippling nearly every industry and pushing millions onto government income replacement programs.

The CEWS is also designed to encourage employers who already have laid off workers to put them back on the payroll, now that they can count on direct payments from Ottawa to cover a significant portion of most wages for the next three months.

"My message to Canada's employers is this: get ready to rehire," Morneau said.

"Canada hasn't seen this type of civil mobilization since the Second World War. These are the biggest economic measures in our lifetimes to defeat a threat to our health," Trudeau told reporters.

What is the government offering?

The federal government will offer a 75 per cent wage subsidy to all businesses that have lost 30 per cent of their revenue as a result of COVID-19 pandemic.

To qualify, companies will have to show that their revenue in March 2020 was 30 per cent less than it was in March 2019.

There may be some exceptions for start-ups and new firms.

A senior government official, speaking to reporters at a technical briefing on a not-for-attribution basis, said there may be some "flexibility" on the revenue comparisons to address the needs of companies that weren't around in March 2019.

The program will be in effect for three months and companies will have to reapply each month — demonstrating, for example, that revenues in April 2020 are also 30 per cent less than they were in the same month the year prior.

The program is retroactive to March 15. 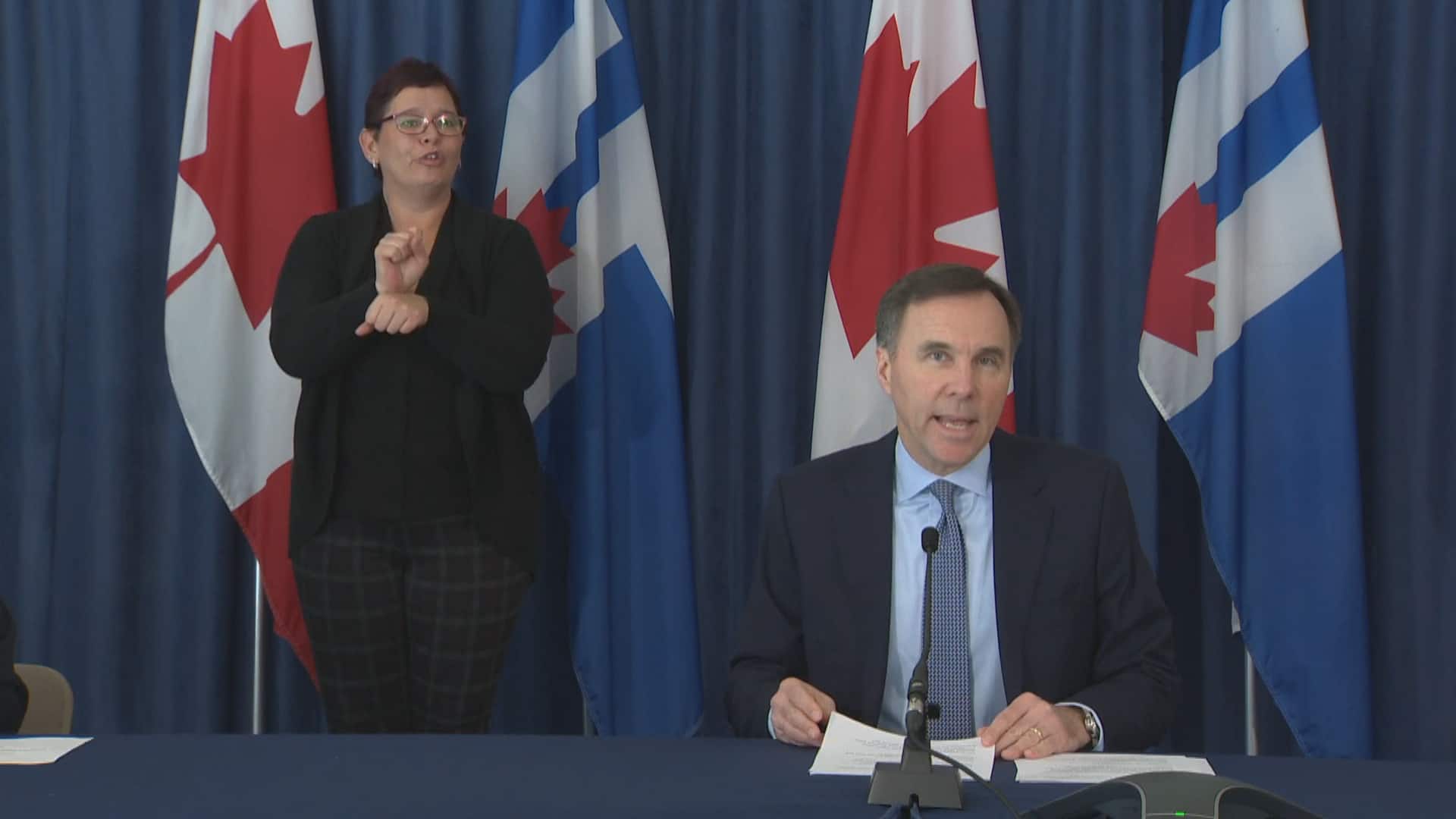 Morneau said Ottawa is hoping employers "do the right thing" and pay the additional 25 per cent of pre-crisis wages to their workers.

However, if an employer is unable to do that at this time, given the ongoing economic challenges, they can simply pay the employee the amount they receive from Ottawa — without an additional top-up.

"This money is for workers. Employers will need to attest that they're doing everything they can to pay the remaining 25 per cent of peoples wages," Trudeau said.

Which businesses will qualify?

The benefit is not limited to small and medium-sized enterprises; it will be offered to all companies that have seen that 30 per cent drop in gross revenue.

It also doesn't matter how many people are on staff. Sole proprietorships and partnerships are also eligible.

The subsidy is available to all types of corporations in Canada, with the exception of non-taxable corporations and public sector entities like municipalities, public schools and hospitals. Bars and restaurants can qualify.

The Canadian subsidiaries of foreign-controlled companies are eligible.

How do employers apply?

The wage subsidy will be administered by the Canada Revenue Agency (CRA) through the My Business Account portal on the agency's website.

Morneau said the money will start to flow to businesses within the next three to six weeks, depending on how quickly the government can make the necessary technical and bureaucratic adjustments to get the money out the door.

All businesses should register for direct deposit to ensure money can be sent electronically, the minister said, to avoid further delay.

A senior government official, speaking to reporters at a technical briefing on a not-for-attribution basis, said six weeks is the "worst case scenario."

Do not-for-profits and charities qualify?

Yes. Non-profits and charities are eligible for the same subsidy.

The government recognizes that these employers may find it harder than businesses do to demonstrate that their revenues have declined by 30 per cent year-over-year.

A government official said Ottawa will be working with the sector in the days ahead to find criteria that are consistent with the ones businesses have to follow. Charities may be asked to show that donations, for example, have dipped.

Beyond the wage subsidies, the government is also considering additional support for non-profits and charities, particularly those involved in the front line response to COVID-19.

Will there be penalties for abusing the system?

Absolutely. The government has said it will be actively looking for instances of abuse — especially employers who pocket wage subsidies without passing them on to their employees.

"These are unprecedented times and will require us to pull together as a country and trust each other as Canadians. So there will be stiff and severe penalties for trying to take advantage of this system and of your fellow Canadians," Trudeau said.

A senior government official said Ottawa is "working on the details" to ensure compliance and prevent fraud.

The government is considering new criminal offences that will apply to individuals, employers or business administrators who provide false or misleading information to obtain access to this benefit, or who misuse funds obtained under the program.

The penalties may include fines or even imprisonment.

The government announced a 10 per cent wage subsidy earlier this month for small businesses. What happened to that?

That program is still in effect. Small businesses can continue to claim the 10 per cent benefit.

However, if they also qualify for the larger 75 per cent subsidy — the CEWS — then the money Ottawa sends will be adjusted downward to account for any payments made through that separate program.

Unlike the CEWS, small businesses can claim the 10 per cent subsidy even if they haven't seen a drop in revenue in recent weeks.

The maximum subsidy for that previously announced program is $1,375 per employee and $25,000 per employer.

How much will the CEWS cost the federal government?

The subsidy is expected to cost about $71 billion over the next three months.

Has there been any criticism of the wage subsidy?

The opposition parties in the House of Commons support direct wage subsidies to businesses.

Conservative Leader Andrew Scheer said Wednesday he is concerned that it could take up to six weeks to get subsidies to employers.

The Canadian Federation of Independent Business, the lobby group that represents small and medium-sized businesses, said it supports the CEWS but it has concerns about the 30 per cent revenue dip requirement. 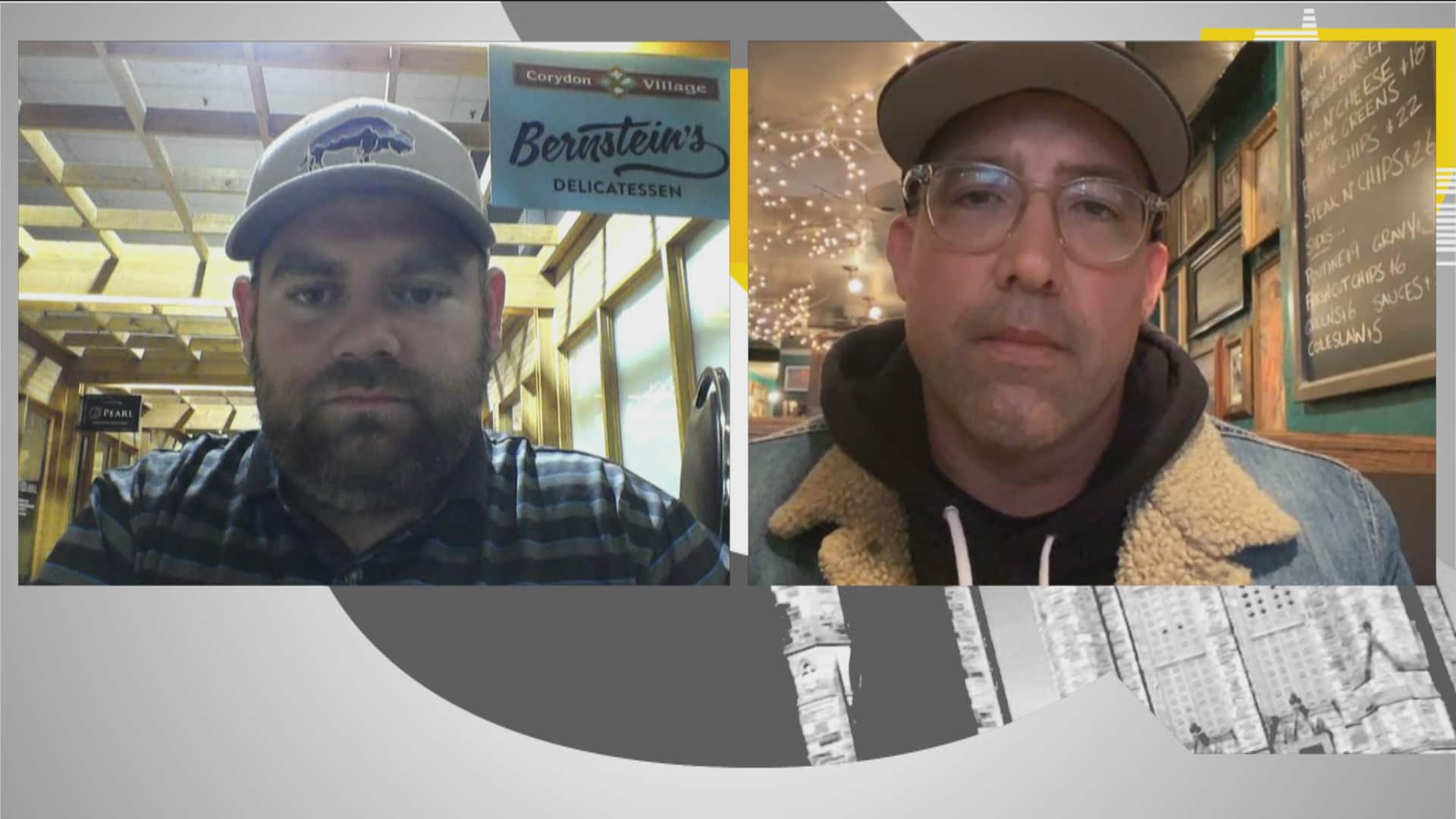 How will the wage subsidy help small businesses?

10 months agoVideo
11:01
Aaron Bernstein, owner of Bernstein's Deli in Winnipeg, and Nathan Hynes, owner of The Auld Spot Pub in Toronto discuss how the wage subsidy will impact them and if the government should be doing more. 11:01

"For some firms with very tight profit margins, even a small drop in sales can require significant numbers of layoffs in order to lower costs," the group said in a statement.

"New businesses, seasonal businesses and those who experienced a major event last year at this time would also find it challenging or impossible to demonstrate the 30 per cent decline figure."

The CFIB is asking Ottawa to eliminate the requirement for proof of a 30 per cent drop in revenue for all firms with fewer than 500 workers, and for those ordered to fully or partially shut down by provincial public health authorities.

Can I receive the Canada emergency relief benefit (CERB) and still collect a subsidized paycheque from my employer?

No. The CERB is available only to workers, including the self-employed, who are collecting no income ($0) as a result of COVID-19.

If you are still being paid by an employer, or picking up the occasional shift, you are not eligible for the relief benefit. Workers who quit or voluntarily leave their jobs are also ineligible for the CERB.

The CERB will temporarily replace standard employment insurance (EI) benefits. It is $2,000 a month and will be paid for four months as long as a worker isn't collecting any income.

Other EI benefits, like maternity and parental leave, will be unchanged.

10 months agoVideo
1:29
Finance Minister Bill Morneau says government programs that would normally take about 2 years to develop are being built in short order due to the COVID-19 crisis. 1:29

Will the government have to pass new legislation through Parliament to enact the wage subsidy?

However, it must again ask MPs and senators to vote on a new piece of legislation authorizing the wage subsidy. It is not yet clear when Parliament will be recalled for such a vote.