A grand plan to relocate the Canadian embassy in Moscow to a modern building has stalled yet again, as "corrupt" Russian bureaucrats withhold permits and approvals. The delay has stuck Ottawa with a rent bill of at least $25 million for a building left unoccupied since 2008, and with no firm date for the move. 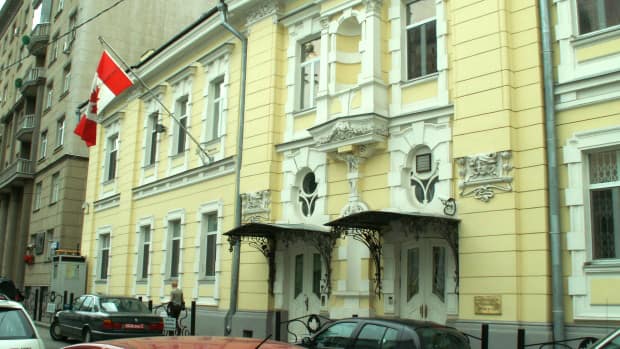 Canadian taxpayers are spending almost $25 million in rent for an empty building in Moscow, as grand plans to relocate Canada's embassy to a new location in the Russian capital remain mired in a dense thicket of red tape and global politics.

The Harper government signed a 20-year lease for a modern red-brick building at 4 Kursovoy Street in March 2008, at a current annual rent of $2.4 million.

But CBC News has learned that construction of new embassy offices at the location is not expected to begin before 2018-2019 at the earliest, more than half-way through the lease.

The badly stalled project is being blamed on corrupt Russian bureaucrats, who often demand bribes for building permits and approvals, as well as on sour relations between the two countries over the Ukraine crisis.

"It's a long, frustrating tale," Ralph Lysyshyn, the now-retired Canadian ambassador who signed the lease eight years ago, said in an interview.

"Russia is a terrible, terrible bureaucracy, and it is an extremely corrupt bureaucracy."

Canada's existing embassy, built as a mansion in 1898 and leased by Ottawa beginning in the Second World War, has all the headaches of a century-old structure, including poor wiring and an awkward layout. It is also cramped, with offices jammed in the basement and above the garage out back.

"People were working in terrible conditions," says Lysyshyn, who oversaw the plans for a move before he retired in 2010.

The building, at 23 Starokonyushenny Lane, is also vulnerable to  attacks because it is not set back from the street. "You can park a car right in front of the embassy."

Attempts to move to a better location date back to at least 1973. One effort was abandoned in the 1990s because the proposed new building lot was near the neglected Moscow zoo, which produced vile odours throughout the neighbourhood.

The latest move was to happen by July 2012, then was pushed to January 2016. But the project was officially put on hold in 2014, and the new Liberal government has not committed to a new move-in date.

There is no approved budget at this time.- Spokeswoman for Global Affairs on projected costs for new Moscow embassy

"The Canadian embassy in Moscow project has been affected by a number of local challenges and by the complexity in obtaining approvals and permits," Tania Assaly, a spokeswoman for Global Affairs, said in an email.

"In the meantime, a number of upgrades have been implemented at the current embassy to ensure its continued functionality. … There is no approved budget at this time for this project."

The Canadian Press reported in 2012 that projected costs for the move had risen by almost $30 million, to $107.3 million, partly as a result of delays to that point.

Jeremy Kinsman, a former Canadian diplomat and now scholar, says "permit problems" in Moscow are frequent, and have scuttled several property deals going back to the 1990s.

"The Ukraine crisis added to tensions," he said in an email. "It would not be surprising if the Russian authorities were especially demotivated by the very public targeted hostility of the Harper government. Our government would then have been less than motivated as well to pursue the project."

Lysyshyn says the Canadian government has never acceded to the Moscow bureaucrats' demands for payoffs, which even the Russian government acknowledges is a problem. "We don't pay bribes, and it requires tremendous persistence."

The original 2008 plan was to keep the old building as the ambassador's residence and a conference centre, moving all offices into the new premises. But Assaly says even that is up in the air until at least 2018: "Options to relocate the residence will be addressed at the time chancery construction begins."

Among the challenges in preparing new offices is to keep the inevitable "bugging" by the Russian security services to manageable levels. Embassies in Moscow, including Canada's, typically have so-called "safe speech" rooms, vaults swept by Canada's own security services for Russian listening devices.

As part of its deficit-cutting budget in 2012, the Harper government sold off a slew of official residences abroad, including an Oslo mansion for $12.5 million, a home in Mexico City for $3.33 million and another in Brussels for $2.1 million.