Canada plans to build up to 18 new coast guard ships at a cost of $15.7 billion in an effort to renew Canada's Coast Guard fleet,  Prime Minister Justin Trudeau announced Wednesday.

'Canadians deserve better than to have this fleet rust out,' PM says in Vancouver

Canada plans to build up to 18 new coast guard ships at a cost of $15.7 billion in an effort to renew Canada's Coast Guard fleet,  Prime Minister Justin Trudeau announced Wednesday.

Up to 16 of the ships will be constructed in a fleet renewal project anchored in Seaspan's Vancouver Shipyards. Two others — Arctic patrol ships that will be modified for the Canadian Coast Guard — will be built at Irving Shipyards in Nova Scotia.

"Canadians deserve better than to have this fleet rust out," Trudeau said during his visit to Vancouver. "This fleet renewal is going to create jobs in everything from ship design and engineering to construction, welding and inspection while strengthening this world class Canadian industry."

Trudeau also announced the government is launching a competitive process for the design of a new class of smaller ships. The mid-shore multi-mission ship will work with the large fleet in shallow areas and perform some science activities.

A plan to refit and extend the life of existing vessels at shipyards across the country will cost up to $2 billion.

Aside from the shipbuilding plan, the federal government is providing an additional $351.3 million to enhance capacity of the coast guard, strengthen management and oversight and promote a greener way of doing business.

According to a government statement, the $15.7 billion figure is an "early estimate" of the cost for construction, support, infrastructure, project management and cost overruns, or contingency funding. The costs of each ship will be announced, the government said, after contract negotiations have been completed.

The 16 multi-purpose vessels will be used for light icebreaking, environmental response and search and rescue while the two new Arctic and offshore patrol ships will perform duties further offshore.

The federal government is also launching a competitive process to add a third Canadian shipyard as a partner under the National Shipbuilding Strategy.

Davie as the third shipyard?

Because of the renewal of the coast guard and new navy investments, Trudeau said Canada will need more than two shipyards to get the job done.

Trudeau said the bidding process for the new yard will be open, although he and one of his ministers seemed to suggest that the Davie shipyard in Quebec has an opportunity to win the contract. 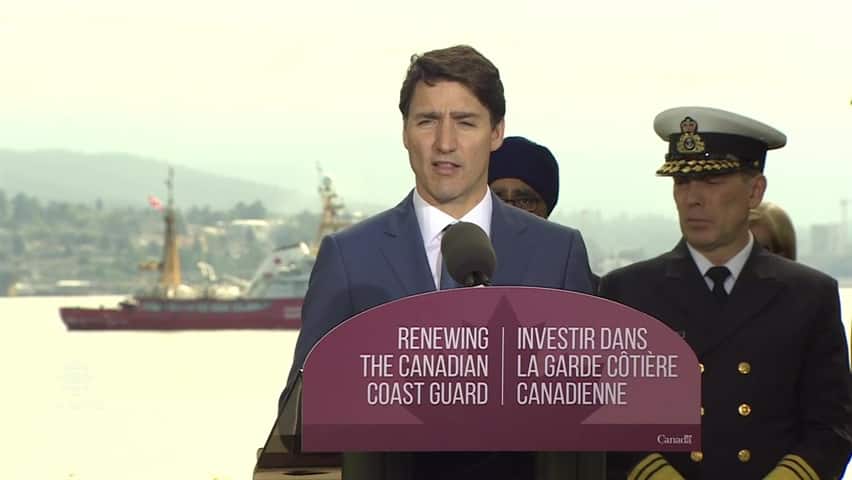 1 year ago
0:47
'We recognize that it’s an opportunity for Davie to apply to become that third shipbuilding facility because there will be a tremendous amount of work in the coming years,' Trudeau said. 0:47

"We recognize that it's an opportunity for Davie to apply to become that third shipbuilding facility because there will be a tremendous amount of work in the coming years for workers in our shipbuilding industry right across the country from coast, to coast, to coast," Trudeau said.

Quebec MP Jean-Yves Duclos, the minister of families, children and social development, echoed Trudeau's announcement in Quai de la Reine, Que., on Wednesday. He said Quebec-based shipbuilder Chantier Davie Canada Inc. "will have the opportunity to demonstrate its competitive advantages in terms of talent and ambition" for the third shipyard bid.

"This is a great news for all of Quebec, for our region, for our workers and for the entire Quebec shipbuilding industry," Duclos said in a campaign-style appearance with coast guard personnel.

"I am very confident with Joel Lightbound [the MP for Louis-Hebert] that Davie will be able to get the status of third partner." 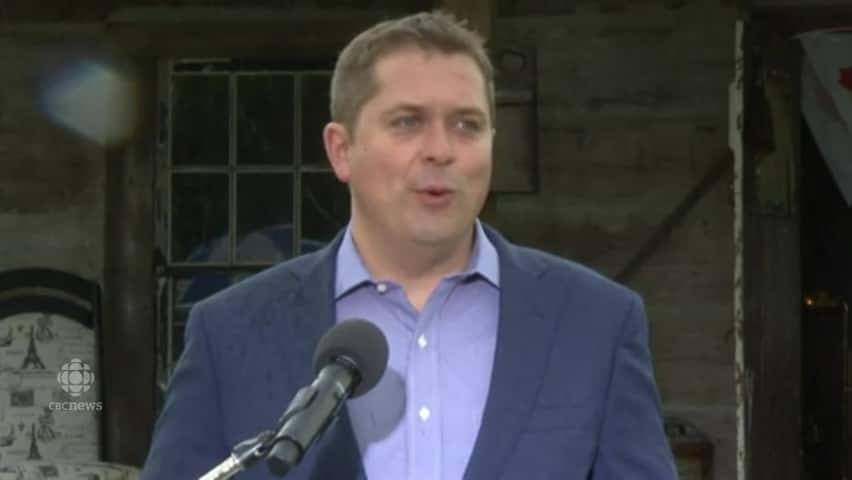 1 year ago
0:33
'This government has shown time and time again that it is just completely incapable of managing our procurement system for our forces.' 0:33

Asked about the shipbuilding announcement, Conservative Leader Andrew Scheer told reporters that the Liberal government has a track record of failing when it comes to procurement and he has little faith this renewal would be any different.

"One thing is clear to Canadians that this government does not have the capability to manage a procurement system in Canada for our armed forces," Scheer said.