Justin Trudeau will push for 'inclusive growth' to help the middle class as he makes his debut on the world stage as Canada's prime minister. Trudeau leaves Friday to attend the G20 Leaders' Summit in Antalya, Turkey, his first foreign trip in a busy fall of international summits. Trudeau on refugees and Premiers meeting

5 years ago
1:57
Prime Minister Justin Trudeau discusses the Syrian refugee situation, as well as his plan to meet with Premiers to discuss climate change prior to the Paris Conference. 1:57

Justin Trudeau will push for investment over austerity to help the middle class as he makes his debut on the world stage as Canada's prime minister.

Trudeau leaves Friday to attend the G20 Leaders' Summit in Antalya, Turkey, his first foreign trip in a busy series of international summits. He and other world leaders will tackle a range of issues ranging from youth unemployment to migration and refugees.

During a news conference Thursday, the prime minister said the need for "inclusive growth" will be at the centre of his discussions with colleagues from around the world.

Trudeau will meet with Turkish President Recep Tayyip Erdoğan and other world leaders, including those of China, Mexico and Italy on the margins of the summit, before traveling to Manila for the Asia-Pacific Economic Cooperation (APEC).

There, he's expected to press for leader-level commitments to tackle economic challenges and will hold a bilateral meeting with U.S. President Barack Obama.

And before he sets off for the next round of international meetings, Trudeau will sit down with the premiers on Nov. 23, one week before the United Nations climate change summit in Paris.

This will be the first time in six years that a prime minister has sat down provincial and territorial leaders. Trudeau's office said the invites have been extended to all first ministers, but the list of attendees has yet not been confirmed.

"I think it will be positive. I think people will bring a spirit of good will to the meeting and I think it bodes well for the future," he told CBC News Network's Power & Politics. 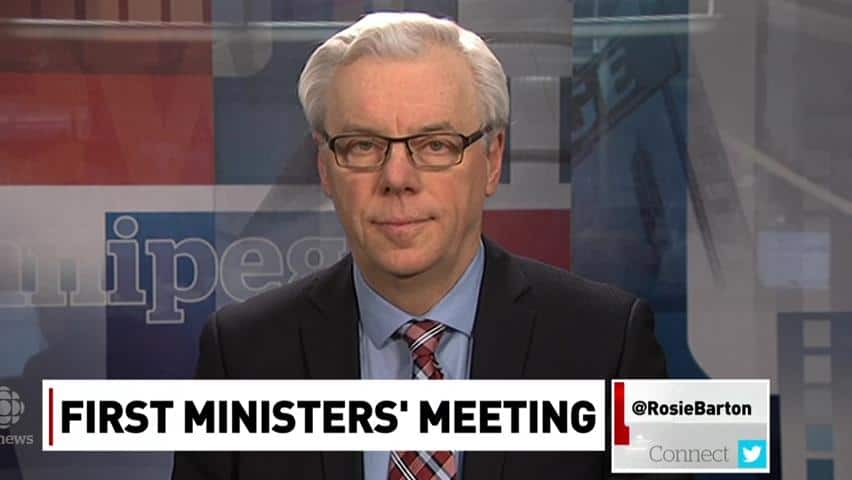 A new era in federal-provincial relations?

Selinger said Canada should strive to use climate change as the impetus to create green jobs and infrastructure to stir a sluggish economy.

"Obviously, none of these things are easily done, but we see the upside as being opportunities for innovation, doing things in new ways," he said

Trudeau said he and the premiers will receive a briefing from top climate scientists before sitting down for a working dinner "to exactly discuss the kind of strong and cohesive message we will be delivering as Canadians."

The last first ministers' meeting was held in early 2009. At the time, then prime minister Stephen Harper gathered with premiers to discuss the economy after the 2008 global financial crisis. From that time on, Harper met with premiers one on one.

Alberta NDP Premier Rachel Notley suspects there will be a "fair amount of consensus" on the climate change agenda.

"I'm looking forward to being able to have a more co-operative and collaborative relationship between the prime minister and all of the premiers again because I think all Canadians benefit from having these first ministers conferences," she told CBC News in an interview to air on The National Friday.

Ontario Premier Kathleen Wynne also has confirmed her attendance to CBC News.  The offices of B.C.'s Christy Clark and Quebec Premier Philippe Couillard told The Canadian Press they would attend.

The climate change conference, called COP 21, begins Nov. 30 in the French capital and will aim to set new global greenhouse gas emission targets after 2020 to prevent a two-degree rise in global temperatures. ​

Today, NDP Leader Tom Mulcair confirmed he has accepted Trudeau's invitation to attend the summit, which was extended to all party leaders and premiers. The interim leader of the Conservative Party Rona Ambrose has also confirmed she'll be going,as has Green Party Leader Elizabeth May.

Trudeau's office said Thursday he'll also meet with Queen Elizabeth in London on Nov.25, ahead of the Commonwealth Heads of Government meeting in Malta Nov.27-29.