Prime Minister Justin Trudeau delivered a blunt message during a brief chat with Russian President Vladimir Putin: back off Ukraine. 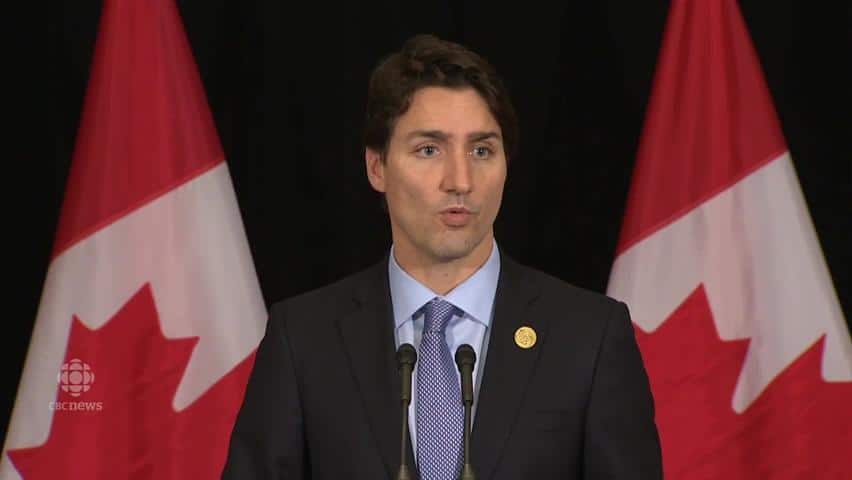 5 years agoVideo
0:49
PM raised the issue of Ukraine in conversation with the Russian president. 0:49

Prime Minister Justin Trudeau delivered a blunt message during a brief chat with Russian President Vladimir Putin: back off Ukraine.

Trudeau said the two leaders had a brief conversation on the sidelines of the G20 summit in Antalya, Turkey.

"I pointed out that although Canada has shifted its approach on a broad range of multilateral and international issues, we remain committed to the fact that Russia's interference in Ukraine must cease; that we stand with the Ukrainian people and expect the president to engage fully in the Minsk peace process," he said.

Putin's relations with Western leaders have deteriorated over Russia's backing of pro-Moscow rebels in Ukraine. Trudeau's stand continues Canada's position under former prime minister Stephen Harper, a staunch supporter of Ukraine and one of Putin's most vocal critics

During the election campaign, Trudeau called Putin a bully and accused him of being "dangerous" in eastern Europe, "irresponsible and harmful" in the Middle East and "unduly provocative" in the Arctic.

"I look forward to working with Prime Minister Trudeau's government in ensuring that Ukraine remains a foreign policy priority for Canada; that the Canada-Ukraine Free Trade Agreement is ratified; and Canada supports the security and sovereignty of Ukraine," said national president Paul Grod in a statement to CBC News.

Grod urged the new Liberal government to take further steps, including "deep sectoral sanctions," against Russia for that aggression and for failing to meet obligations under the Minsk agreement.

Putin also met with U.S. President Barack Obama on Sunday. The 20-minute talks focused on the fight against ISIS in Iraq and Syria.

During the G20 summit, Trudeau also held full bilateral meetings with the leaders of Italy, Germany, China and Mexico.

Mexican President Enrique Pena Nieto later tweeted that Trudeau had formally committed to lift the Mexican visa requirement that restricts travel to Canada, which was a promise from the Liberal campaign platform.

The requirement had become an irritant between the two countries.