Conservative Leader Stephen Harper says Canada is "the largest per capita refugee receiver in the world," but the numbers tell a different story.

Canada in 41st, not 1st place, as 'per capita refugee receiver in the world' 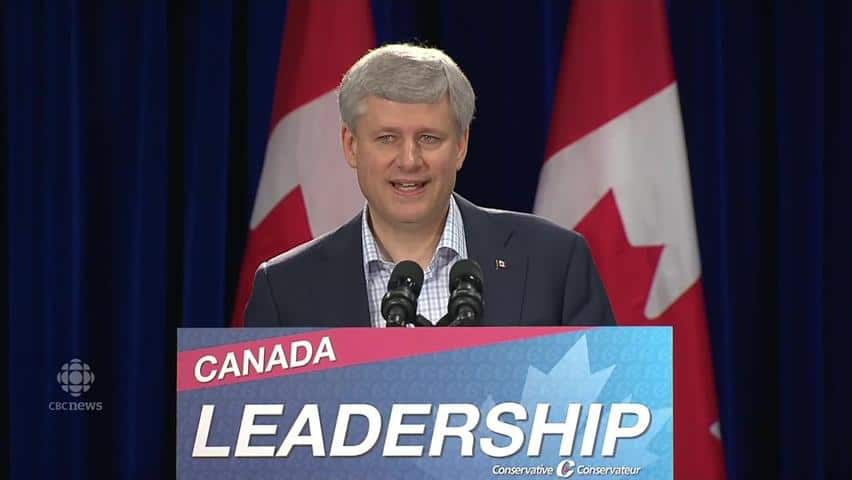 Stephen Harper faces more questions about how he has responded to the Syrian refugee crisis.

5 years ago
5:16
A heckler interrupts Harper to chide reporters for asking about Syrian refugees 5:16

The Harper government has long portrayed Canada as the country most open to refugees, relative to the size of the country's population. As the election campaign focus turned to the Syrian refugee crisis, this has become a Conservative Party talking point since last week.

Stephen Harper made the point himself at least twice on Wednesday. Answering journalists' questions in Welland, Ont., he referred to Canada as "the largest per capita refugee receiver in the world."

Answering another question about Syrian refugees, he said, "Let's put this in context," and then continued, "Canada is the largest resettler of refugees per capita in the world by far."

The UN refugee agency, UNHCR, says Lebanon, not Canada, has the most refugees per capita, about one refugee for every four inhabitants.

At the end of 2014, Lebanon hosted 1.15 million refugees, mostly Syrians and Palestinians. The UN agency says 403,600 Syrian refugees newly registered in Lebanon in 2014, "stretching the country's socio-economic absorption capacity to its limit."

And this week the agency said that 70 per cent of Syrian refugee households in Lebanon "live far below the national poverty line."

Jordan was a distant second to Lebanon for hosting refugees, with the south Pacific island nation of Nauru ranking third at the end of 2014. In mid-2014, Nauru, which has an Australian-run detention centre for refugees hoping to reach Australia, didn't even rank in the top 15 countries. Chad ranks fourth.

The UNHCR ranks Canada not first, but tied for 41st place in refugees per capita.

The countries that receive the most refugees tend to be neighbours of the countries refugees are fleeing. (Although not all the neighbouring countries. For example, Israel, Saudi Arabia and Kuwait host virtually no Syrian refugees.)

So it would be quite surprising if Canada did lead the world in accepting refugees. Yet in northern Europe, Sweden ranks ninth in the UNHCR's per capita numbers. Sweden hosts 1,477 refugees per 100,000 inhabitants, compared with Canada's 420. Five other European countries also rank ahead of Canada.

Sixty per cent of the refugees who came to Canada in 2014 were from Africa and the Middle East.

Canada not No. 1 on immigration, either

During the election campaign, Harper has also said that "Canada is the largest per capita receiver of new immigrants in the entire world."

The government's numbers show that 260,000 immigrants came to Canada in 2014, including 23,286 refugees. The 2014 number is close to the average number of immigrants arriving annually over the past 10 years.

The 2014 number works out to 733 immigrants per 100,000 Canadians. Compare that with the 8,968 Syrian refugees per 100,000 inhabitants who arrived in Lebanon last year and it's clear Canada would have a long way to go before Harper's statement was accurate.

Also not 'the largest resettler'

And what about Harper's use of the term "resettler" in one of those statements quoted at the top of the article?

Harper could be referring to resettlement, a UNHCR term for "the transfer of refugees from an asylum country to another state." Only 26 countries have resettlement programs under which a mere 105,200 refugees were transferred in 2014, compared with the 2.9 million people who became refugees in 2014.

The U.S. received 70 per cent of the refugees who were resettled in 2014. Canada was No. 2 in resettlement of refugees.

Taking the number of refugees resettled during the years 2003-2014 together, Australia's per capita rate is also the highest, about 1.5 times second-place Canada.

When it comes to refugees, one thing for which Canada does have global bragging rights is the Nansen Refugee Award. The UNHCR has been presenting the award annually since 1954 (Eleanor Roosevelt was the first winner) and in 1986, "The People of Canada" won — the only country to achieve that honour.