Politicians, fellow soldiers and the Canadian public are gathering on Parliament Hill today for a ceremony to mark the anniversary of two uniformed soldiers killed one year ago. 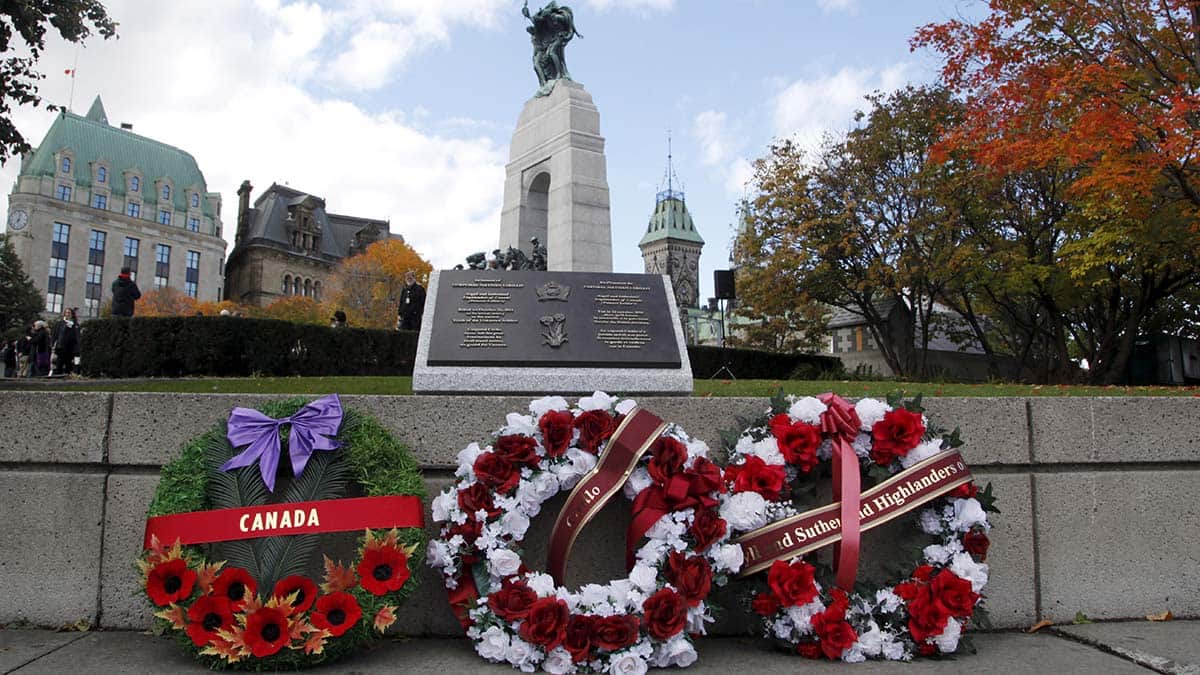 5 years ago
2:03
Sounds and voices from ceremony honouring 2 fallen soldiers 2:03

Politicians, fellow soldiers and Canadians are gathering on Parliament Hill today for a ceremony marking the anniversary of two uniformed soldiers killed one year ago.

Cpl. Nathan Cirillo was gunned down Oct. 22, 2014, at the National War Memorial by Michael Zehaf-Bibeau, who later stormed into the Centre Block of the House of Commons where he was shot dead.

Canadians are recalling the terror and heroism that marked that day. Here are their voices.

"To the families, friends and loved ones of Warrant Officer Patrice Vincent and Cpl. Nathan Cirillo: my heart goes out to you on this painful anniversary. We remember them, and we honour their service to Canada.

"Their duty was to defend us and to bravely stand on guard for our country. Ours is to remember their sacrifice, and to remember why they served.

"Warrant Officer Vincent and Cpl. Cirillo both had very important jobs: to defend our rights and our freedoms as a people.
They stood up for our democratic values of tolerance, of diversity, of equality, of fairness and of the rule of law, by which I mean the constant, relentless pursuit of justice.

"This is who we are. Our Parliament is a symbol of who we are. It too was attacked last October.

"Many of you valiantly rushed to defend it, just as others of you rushed to the aid of the wounded here in Ottawa and in Saint-Jean-Sur-Richelieu.

"You are citizens, you are first responders, and you are police and security officers. You are dedicated members of the Canadian Armed Forces. And when those terrible events took place, you acted with great resolve. You were courageous and compassionate and professional.

"You helped maintain order and security. You stood in the way of danger. And you did everything you could for the fallen.
It's been one year.

"How you responded tells us what kind of people you are, and what kind of people we are. We owe an enormous debt to everyone who pulled together one year ago with such bravery, humanity and resolve. Here we stand, and here we shall remain. Let us remember the fallen, and rededicate ourselves to all we hold dear as a people."

"One year ago today, terrorist attacks were carried out against fellow Canadians at hallowed national sites of commemoration and democracy.

"Let us pause on this date to remember Cpl. Nathan Cirillo, who fell while standing guard at the National War Memorial, as well as those injured on Parliament Hill. Let us also remember the deadly assault on Warrant Officer Patrice Vincent, who was targeted simply for wearing his uniform two days earlier in Saint-Jean-sur-Richelieu, Que. Canadians continue to honour and remember these proud members of our Canadian Armed Forces.

"On this day let us also pay tribute to all the security forces, medical personnel and brave citizens who risked their safety to stop the attackers and help those injured.

"It was inspiring to see how Canadians came together in the aftermath of these attacks, offering each other support, condemning terrorism and showing the courage and resolve that make our country great.

"As we remember the victims and heroes on this sombre anniversary, let us be thankful for the freedom and peace we continue to enjoy in Canada."

"One year ago, our nation was shaken by brutal and heartless acts of violence that occurred in Saint-Jean-sur-Richelieu and in Ottawa on Parliament Hill. We are grateful for all the brave men and women who sought to keep us safe on Oct. 22.

"Today our thoughts and prayers remain with the loved ones of Warrant Officer Patrice Vincent and Cpl. Nathan Cirillo who tragically lost their lives. We continue to grieve with their families.

"Our servicemen and women, who have put their lives on the line for their country, stand for the very best of what it means to be Canadian. We will live up to our sacred obligation to Canada's men and women in uniform, our veterans, and their families.

"As I said in addressing the country last year, the picture in our minds — of Canadians helping and protecting Canadians — that is who we truly are, and it is who we shall continue to be.

"We will not allow threats to shape us, nor bow to those who mean to undermine our values and way of life. Canadians are kind and generous, open-minded, and optimistic. We know that Canada was built by people from all corners of the world, who worship every faith, who belong to every culture, and who speak every language. 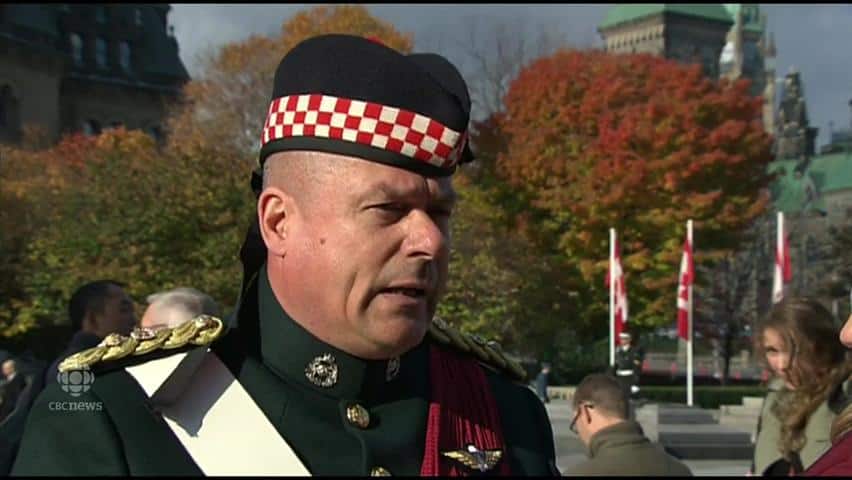 5 years ago
4:17
Lt. Colonel Peter St. Denis, Commanding Officer of the Argyll and Sutherland Highlanders reflects on how the regiment has dealt with the death of Corporal Nathan Cirillo. 4:17

"Today, the NDP caucus, Catherine and I join with all Canadians in solemn remembrance on this one-year anniversary of the shootings at the National War Memorial and Parliament Hill.

"These horrifying attacks shocked our country and stunned the nation's capital. Our thoughts and most sincere best wishes are with the family of Corporal Nathan Cirillo and Warrant Officer Patrice Vincent, who paid the ultimate price for these senseless acts. We also offer our deepest gratitude to the law enforcement officials who demonstrated their heroism that day and who continue to risk their lives to remain on guard.

"Today, Canada grieves and remembers, but we remain steadfast against any who wish to undo our unwavering commitment to peace and order. This act of hate, which intended to drive neighbours apart and isolate communities, achieved the opposite result, a stronger and more united Canada."

"Today, my thoughts and prayers are with Kathy Cirillo, Nathan's mom, and all the members of the House of Commons and Senate Security, RCMP and Ottawa police officers who performed so many selfless acts of unmeasurable courage standing and defending the values of all Canadians."

"We've worked really hard to support the family and make sure that they're being taken care of. We've actually been very lucky in a way, because as much as we claim to have tried to support the family, they've demonstrated such an amount of courage and dignity — that kind of supported us in turn."

"Today marks one year since the tragic death of Cpl. Nathan Cirillo and the heroic actions of several Parliament Hill security personnel and RCMP officers. We remember Cpl. Cirillo and honour him not just today but every day, by our constant pursuit of peace, order and security. Our thoughts remain with Cpl. Cirillo's loved ones.....

"Security is a shared responsibility and we need to remain vigilant. Together with our partners, we will continue to keep Canadians and visitors to Parliament Hill safe and secure by reducing the risk of potential incidents."

"We were shocked and saddened by these assaults and reminded that no country is immune to terrorism. Today, we commemorate the tragic events of October 2014 by honouring our Fallen and our heroes.

"Today we pay tribute to those who gave their lives so that we can live in a free, democratic and safe society. We have pulled together as a country through many challenges and together we stand in solidarity as we remain vigilant against those at home and abroad who wish to harm us." 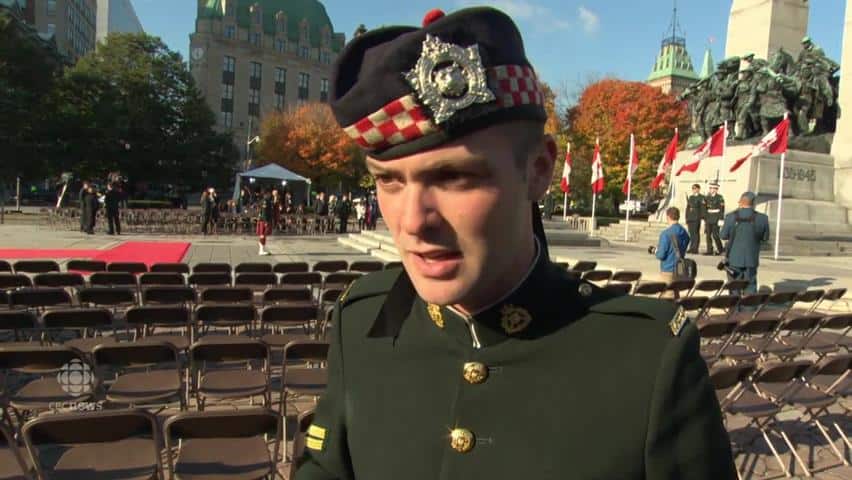 Nathan Cirillo's friend reflects on growing up together

5 years ago
2:46
Corporal Ryan Weinberger of the Argyll and Sutherland Highlanders remembers his friendship, and growing up with Corporal Nathan Cirillo. 2:46

"Today, the parliamentary community pauses to acknowledge the terrorist attack that took place on Parliament Hill one year ago. All of us were profoundly affected by that distressing day, and, for many, the passage of time has not lessened the impact of the experience.

As Speaker of the Senate and Speaker of the House of Commons, we are proud of the courage and dignity that was demonstrated by our security forces, parliamentarians and employees, not only on Oct. 22, 2014 but in the difficult weeks and months that followed.

We are also proud of the strides that have been made over the past year towards improving security on Parliament Hill. The changes are palpable while still ensuring open access to the home of Canada's democracy. ‎What has and always will underpin the approach are the men and women in uniform who protect us daily and without question: from the newly-created Parliamentary Protective Service to the Royal Canadian Mounted Police and their security partners. We are forever grateful to them."