Canada's defence minister says the government remains committed to withdrawing the country's CF-18s from the Middle East, even after two jets were called upon to help beat back a large-scale ISIS attack this week in northern Iraq. 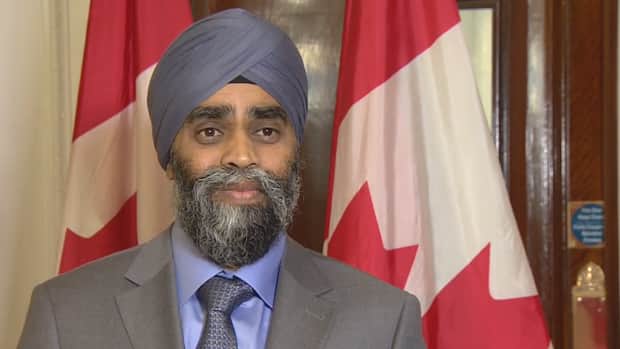 Canada's defence minister says the government remains committed to withdrawing the country's CF-18s from the Middle East, even after two jets were called upon to help beat back a large-scale ISIS attack this week in northern Iraq.

Speaking in London, England, Harjit Sajjan said Canada is still committed to ending the country's involvement in airstrikes against ISIS in Syria and Iraq, and "readjusting" the mission.

On Wednesday, Islamic State of Iraq and Syria forces launched a three-prong offensive that opened with mortars, rockets, and several car bombs, and was reported to have involved hundreds of extremist fighters in northern Iraq.

"This shows that our special forces, throughout the last year, have been working well with them and providing the necessary training to allow them to do that," he said.

Sajjan said Friday the ISIS attack didn't come as a surprise, calling it an evolution of the militant group's tactics.

In a statement, Conservative critics pointed out that none of Canada's allies has asked Canada to step back from this fight, adding that Thursday's combat was "another in a long list of examples of the success of the mission as currently constructed."

"It's clear that the brave men and women of the Canadian Armed Forces, including our CF-18 fighter jet pilots, are helping to win the fight against jihadi terrorism, stopping ISIS atrocities, and saving lives. This is the very reason why our CF-18 jets have to stay in the fight against ISIS," said defence critic James Bezan.

"The Liberal policy to withdraw our fighter jets is completely incoherent," said foreign affairs critic Tony Clement in the same statement. "The government still hasn't articulated any clear plan for what the mission will look like once they withdraw the CF-18s."

"The government's opposition to CF-18s conducting airstrikes is solely ideological and not based on any policy rationale whatsoever," Clement said.

A year-end interview with Sajjan published in the Huffington Post on Thursday has caused some confusion about exactly when Canada's bombing mission will end.

The defence minister said Canada's CF-18s would be pulled out in "less than six months," but he wouldn't confirm they'd necessarily be brought home within three months.

The current mission is scheduled to end in March.

When asked specifically about these dates, Sajjan's press secretary, Tina Crouse, said there is "no specific timeline for withdrawing the CF-18s from the air combat mission.

"We are currently consulting with our allies in the Coalition to make sure our withdrawal creates no operational impact," she wrote in an email to CBC News.

"The Liberals told Canadians that they would end the bombing mission immediately – but instead, the minister is now floating an extension that goes beyond even the Conservative [government]'s March deadline," NDP defence critic Randall Garrison said in a media release.

The NDP is looking for a full parliamentary debate on "any new training mission," in light of the combat situation that Canadian trainers found themselves in this week.

"Canadians deserve to have a clear answer about the government's plans – and they certainly deserve better than extension by stealth," said Garrison in his release.

Canada has a total of 69 special forces trainers on the ground in northern Iraq who are working with local forces.

No Canadians were hurt in this latest fighting.

Canada has said it wants to bolster its training mission, and Sajjan said he met with U.K. Secretary of State for Defence Michael Fallon to discuss what is needed in the region.

"I want to make sure that we have a meaningful contribution that is going to assist in the fight against ISIS," Sajjan said.