Dairy industry getting help to compete, not compensation, for EU trade deal

Canada's dairy sector will receive help to adjust to more competition from the new European cheese imports expected under the terms of the Canada-EU trade deal signed last weekend. But don't call it compensation: the Liberals have something else in mind.

Canada's dairy sector will receive help to adjust to increased competition from the new European cheese imports expected under the terms of the Canada-European Union trade deal signed last weekend.

But don't call it compensation: the Liberals have something else in mind.

Asked about compensation promised for the dairy sector, an official said that the federal government was working on "a package of transition assistance to position both processors and producers to be better able to compete with imports from the EU."

Details will be announced in the coming days or weeks. Separate programs will be on offer for farmers and dairy processors, according to the briefing.

"It's really geared toward helping the industry get into a better place, more than compensation as a result of any potential damage," the official said.

The new program wouldn't offer lump sum payments, but be "more in the nature of an investment."

No total dollar figure was given.

Agriculture Minister Lawrence MacAulay's department led consultations over the summer, following an announcement last May that the federal government was considering "transition support… as well as proposed program and investment options."

MacAulay is currently in China on a trade mission, returning later next week.

The trade department also held public consultations on how the new EU cheese import quotas should be allocated. Those discussions are "well-advanced," the official said, now at the stage of preparing recommendations for the minister.

Until more is known about who will import what cheese from where, it's hard to say exactly what CETA will mean for both consumers and the domestic industry.

Thirty per cent of the new quota has been designated for new entrants, but the rest may go to existing players, meaning those who will be importing the new European cheese may currently be selling Canadian cheese.

The official said there are "many estimates out there" of what will happen. The Dairy Farmers of Canada have one, he said, while Agriculture and Agri-Food Canada has another.

Because what CETA offers is "fairly limited," the official said, "we're not anticipating that there would be significant disruption among Canadian dairy farmers."

New imports may not shrink the size of the Canadian industry because domestic appetites for cheese are growing overall, particularly for the kind of specialty cheeses the EU exports.

In the future, however, those appetites may be fed with imported products.

The government could help farmers and processors upgrade technology.

"We are hoping it will encourage some further innovation and experimentation with some of the products," the official said.

The new European cheese will be phased in over five years. Initial amounts will be small.

CETA could be provisionally applied in 2017 if it's ratified by the European Parliament. 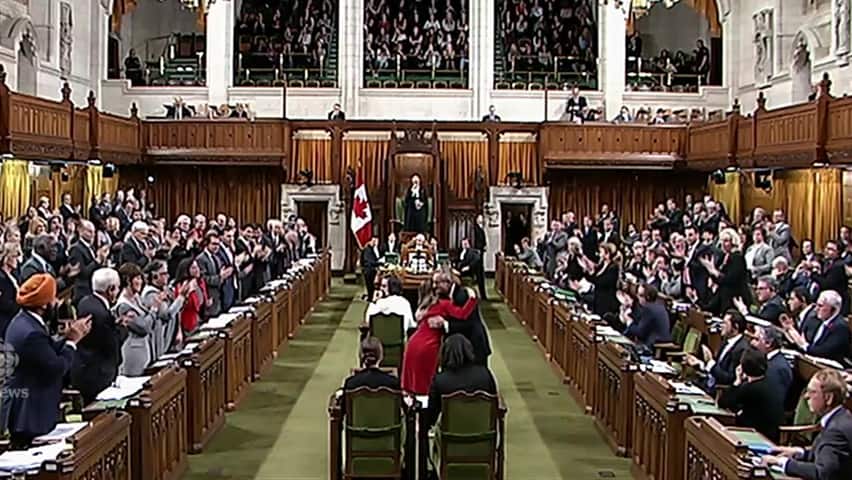 4 years ago
1:10
International Trade Minister Chrystia Freeland crosses the floor of the House of Commons to hug her predecessor, Ed Fast, who spent years working on the CETA deal that was signed over the weekend. 1:10

In the middle of the 2015 federal election, negotiations concluded for the Trans-Pacific Partnership (TPP), a separate trade agreement between 12 Pacific Rim trading partners, including Canada.

Like CETA, that deal also opened up a share of the market for Canada's supply-managed agriculture sectors.

The former Conservative government had prepared a compensation package. It was meant to cover losses from either CETA or the TPP, for not only the dairy sector, but also the poultry and egg sectors that face new competition under the TPP only.

Stephen Harper's cabinet was said to have approved:

But it wasn't clear how much of that was meant to apply if only CETA was ratified, as now seems possible. It also didn't break down how much was meant for the dairy sector alone.

When power changed hands in Ottawa and the Liberals took office, compensation figures were missing from subsequent spending estimates and last spring's budget.

The federal official said Wednesday that because CETA's impact is "much narrower" than what was envisioned for the two trade agreements together, "we have been talking not about compensation but about some assistance for transition."

In Tuesday's question period, for example, the NDP asked about compensating Canadian dairy producers for their losses against subsidized imports from Europe.

MacAulay's parliamentary secretary, Jean-Claude Poissant, said the Liberal government is "aware of the needs of the Canadian dairy industry," and would "provide transition programs" before CETA takes effect.

Isabelle Bouchard, a spokeswoman for the Dairy Farmers of Canada, told CBC News her organization's most recent briefing mentioned a transition fund, but did not have the detail provided to journalists.

"We've been asking for clarification but haven't got anything," she said. "We want to have the rationale behind it." Trudeau thanks MPs from both sides of the House

4 years ago
0:49
Prime Minister Justin Trudeau stood in the House of Commons during Question Period to thank all members of the House of Commons, Conservative and Liberal, who worked on the CETA deal with the E.U. 0:49
CBC's Journalistic Standards and Practices|About CBC News