Prime Minister Justin Trudeau brought to the table the promise of an investment agreement with Ethiopia and $10 million to help empower African women on Saturday as he continued his bid to get African votes for Canada's attempt to win a United Nations Security Council seat later this year.

Prime Minister Justin Trudeau brought to the table the promise of an investment agreement with Ethiopia and $10 million to help empower African women on Saturday as he continued his bid to get African votes for Canada's attempt to win a United Nations Security Council seat later this year.

Trudeau also spent the first full day of a three-day trip to Addis Ababa meeting with some of the African Union's heaviest hitters in a series of tête-à-têtes on the sidelines of the union's 33rd sessional meeting in Addis Ababa.

That included spending most of the morning with Ethiopian Prime Minister Abiy Ahmed for meetings and a private tour of a new public park and zoo on the grounds of the prime minister's residence. The tour was notable for its length, and the ease with which both leaders strolled around the grounds, though Abiy gave no hints about which way he is leaning for the security council vote.

Abiy did tell Trudeau Ethiopia is grateful to Canada's support over the years.

"We Ethiopians have a deep sense of friendship to Canada," he said.

Ethiopian influence, economy on the rise

Abiy has been named as one of the most influential leaders in Africa, including by New Africa magazine in both 2018 and 2019, and was among Time Magazine's 100 most influential people of 2019.

Last fall he was also awarded the Nobel Peace Prize.

Following a private meeting with Abiy, Trudeau noted the promise of Ethiopia's fast-growing economy and said their meetings were a chance to take Canada and Ethiopia's relationship to the next level.

However it wasn't until after he met with Ethiopian President Sahle-Work Zewde for a working lunch at the presidential palace that he provided some detail about what that could mean.

Trudeau said Canada and Ethiopia are about to start negotiating a Foreign Investment Protection Agreement.

Canadian Trade Minister Mary Ng, who is in Africa with a trade delegation of Canadian companies, wouldn't say how long those negotiations could take or what the agreement could look like. Many times these agreements take several years to put in place.

Canada and Ethiopia currently have a relatively small trading relationship — just $170 million in two-way trade in 2018. But the Ethiopian economy has exploded in the last two decades, with the gross domestic product per person soaring 189 per cent between 2000 and 2018. Addis Ababa is a city in transformation, with construction cranes and new high-rise buildings all over the city's core. 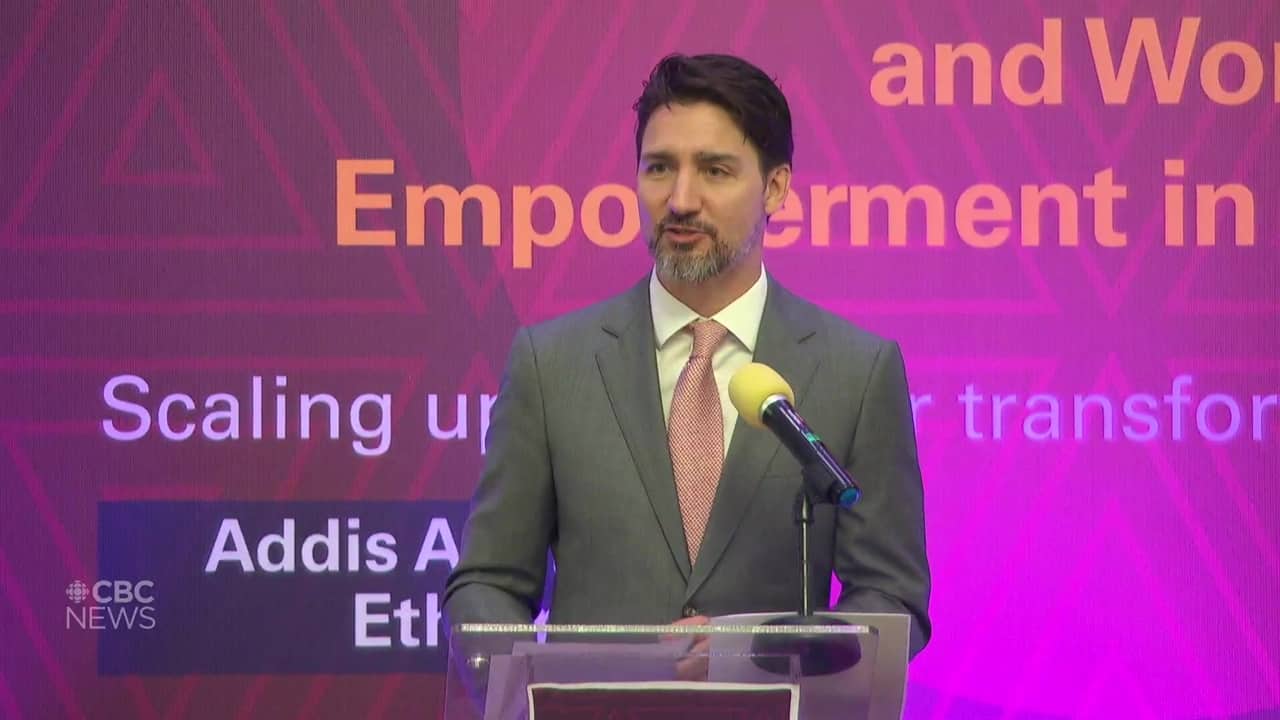 1 year ago
1:35
Canada's contribution of $10 million to go to the African Union Commission for gender equality and women's empowerment. 1:35

On Saturday night Trudeau spoke at an event about Africa's "blue economy" which refers to using water bodies for sustainable economic growth.

President Zewde later told Trudeau she appreciated his "strong feminist policy" and support for women's empowerment initiatives. Zewde is the only female head of government in Africa currently, and is considered to be the most powerful woman in Africa.

There are some who have seen Trudeau's trip as a Hail Mary pass to secure much-needed African support for the coveted seat on the UN's powerful Security Council. Canada is up against Norway and Ireland for two seats available to a group of countries that includes western Europe, Canada, Israel, Australia and New Zealand among some others.

Several African scholars have said Trudeau did not do enough in his first four years in power to improve diplomatic ties or economic associations in Africa and is only coming to the table now when he wants the votes. African countries will have 54 votes out 193 total cast.

Trudeau is in Africa at the same time as the head of Norway, Prime Minister Erna Solberg. The two politely waved at each other across the room at the morning women's empowerment breakfast and had a polite embrace in the evening prior to the blue economy discussion.

Solberg told reporters earlier in the day she didn't want to criticize Canada but she felt Norway's aid spending was proportionately higher than Canada's and that Norway has been a steadier partner for Africa over the years.

"I think one of the differences, of course, is we have been on the steady same path for a very long time, so they know us," Solberg said.

Cabinet ministers accompanying Trudeau insist the relationship with Africa is not last minute, nor is it solely because Canada needs many of Africa's 54 votes at the UN to win the seat.

"It's not like we were absent and now we are showing up," said Families Minister Ahmed Hussen. "Nothing could be further from the truth."

Solberg also met with Abiy and Zewde on Saturday. She also was in Ethiopia a year ago when she had talks with Abiy, and Abiy visited Norway last fall to accept his peace prize and meet with the country's top leaders.

This is Trudeau's first visit to Ethiopia.