May squarely accused Harper of leading Canada into recession twice during his tenure. She followed up by putting the prime minister on the defensive about his record on reducing greenhouse gas emissions.

The Green leader saved some barbs for NDP Leader Tom Mulcair, trying to draw him out on a controversial pipeline project and denouncing his party's past support for an extended bombing campaign in Libya.

The Green party considered the debate, sponsored by Maclean's magazine, an important opportunity for May to capture the attention of voters.

She didn't waste that chance.

May mounted a multi-pronged attack on Harper's economic record, accusing him of cherry-picking data to present a rosy picture. She took issue with corporate tax cuts, the climbing national debt and a long-term investment treaty with China.

"We're in a recession under your watch for the second time," May said.

She called Harper's record on battling climate change a "litany of broken promises." 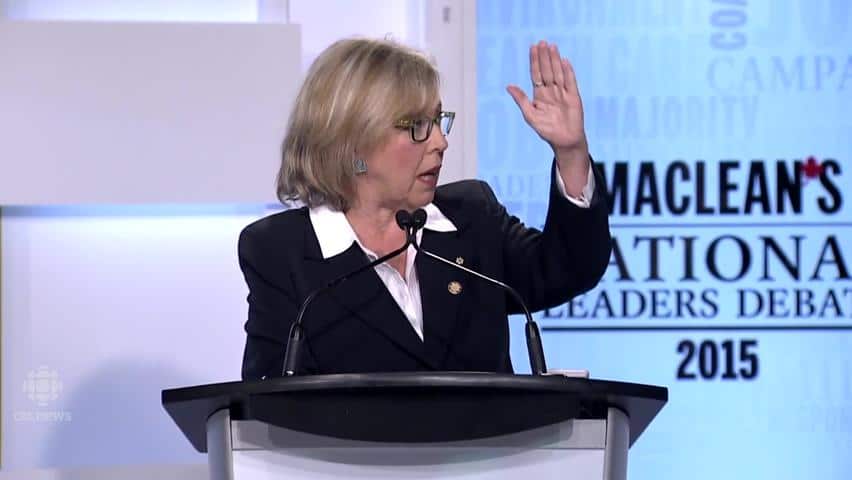 5 years ago
1:01
Elizabeth May says carbon emissions have risen under Conservative rule 1:01

But one of the Green party's key goals is to persuade voters it's about more than just the environment.

"I ask you to get to know us. We are not what you think," May said in her closing remarks Thursday.

"We're not a one-issue party. And we're certainly not a one-person party."

Lone debate for May?

The Greens have been hovering between three and seven per cent in recent polls of voter intention, but the challenge will be translating that support into seats in the first-past-the-post system. May currently has only one elected caucus mate, Ontario MP Bruce Hyer.

The party has set a goal of about 16 seats in the Oct. 19 ballot — enough to exert influence in what many expect to be a minority Parliament.

The Greens have signalled a willingness to work with other parties to help achieve their own policy goals.

"We want to go to work for you in a more collaborative Parliament," May said. "We believe in a Canada that works together for all of us."

The debate could be May's lone shot at reaching a mass audience in a debate setting during the campaign.

May has not been invited to participate in coming exchanges sponsored by the Globe and Mail newspaper and the Munk Debates.

In addition, it now appears the traditional debate staged by a consortium of major broadcasters is in doubt due to the likely lack of participation of Harper and Mulcair.