A Liberal government would provide hundreds of millions in new money to help support the country's startup and innovation sectors, party leader Justin Trudeau said Tuesday, saying that Canada has "fallen behind" in developing new technologies for use around the world.

'New technologies are disrupting old economic models,' and Canada must capitalize on opportunity 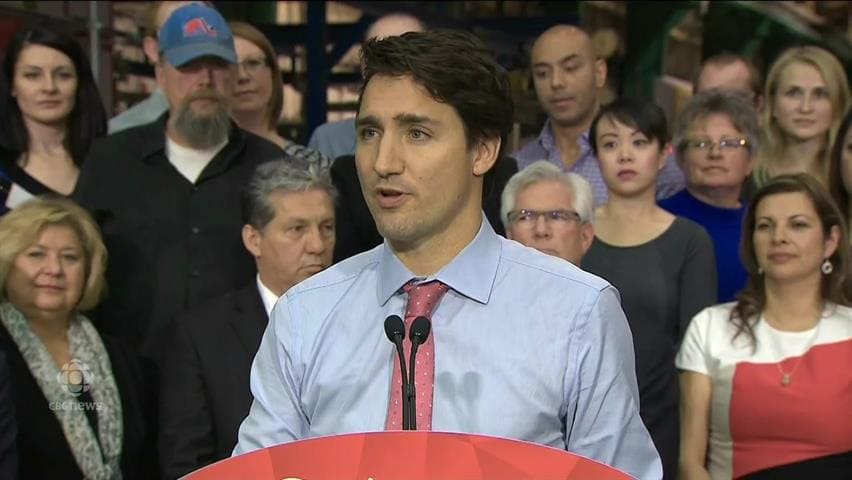 5 years ago
2:05
Liberal Leader Justin Trudeau promises to invest millions for a new innovation fund and to support more r&d in Canada. 2:05

A Liberal government would provide hundreds of millions in new money to help support the country's startup and innovation sectors, party leader Justin Trudeau said Tuesday, saying that Canada has "fallen behind" in developing new technologies for use around the world.

Trudeau made the commitment during a campaign stop at Carte International Inc., a Winnipeg-based company that produces a host of high-tech products for export.

Trudeau said the Liberals would invest $200 million per year over the next three years in what the party is calling a "new innovation agenda." The money would support technology incubators — companies that provide startups and entrepreneurs with the practical and logistical support they need to focus on developing their products — and research facilities and financing for small businesses looking to grow.

Skip ScribbleAccording to Trudeau, the funds would help create a network between technology startups, government and academic institutions — similar to those already in place in countries like Germany and the United States — that would help create an environment that encourages growth and promotes Canadian innovation on a global scale.

"The global economy is increasingly competitive. New technologies are disrupting old economic models and emerging economies are taking an ever-growing share of the global marketplace," Trudeau said. "This poses challenges to Canada, but it also, of course, offers new opportunities."

If the Liberals form government after Oct. 19, they would also contribute $100 million per year for the next three years to the Industrial Research Assistance Program, which helps businesses accelerate their growth by connecting them with new technology and research.

Trudeau said a Grit government would also set aside a portion of federal procurement budgets for "promising new Canadian technologies and businesses, consistent with international trade agreements," though he did not specify an amount.

"We've fallen behind on innovation," the Liberal leader said. "We also lack enough well-financed incubators that provide the advice, office space and access to research and financial support that entrepreneurs need to start dynamic new companies."

The Conservatives and NDP have also committed money to encourage innovation in various industries.

Earlier this month, the Tories pledged $30 million towards an advanced manufacturing hub in Burlington, Ont., as well as $100 million to a manufacturing fund that would make grants available to innovators in the automotive, information and communication technology, steel and aluminum manufacturing and machinery and equipment construction sectors. The money would be intended to boost Canada's manufacturing sector, once the dominant economic engine of the country.

The New Democrats have promised a $40 million tax credit for the manufacturing sector, as well as a $160 million fund to spur innovation and manufacturing in the aerospace industry for high-tech technological advances and hiring more highly-skilled workers.

The Liberals circled back to Winnipeg for Tuesday's announcement because they are hoping to pick up a few seats in the city, where polls suggest low approval numbers for Manitoba's NDP provincial government.

The Liberals want to regain their former strongholds in Winnipeg South Centre and Saint Boniface—Saint Vital.