Justin Trudeau vows to 'bring Canadians together' at Brampton rally

Liberal Leader Justin Trudeau promised to replace Stephen Harper's "small and meek and fearful" vision of Canada with one that is "open and confident and hopeful" as he campaigned in front of thousands of cheering party faithful at a Brampton, Ont., arena.

Liberals will release their full platform on Monday, which will include some new commitments 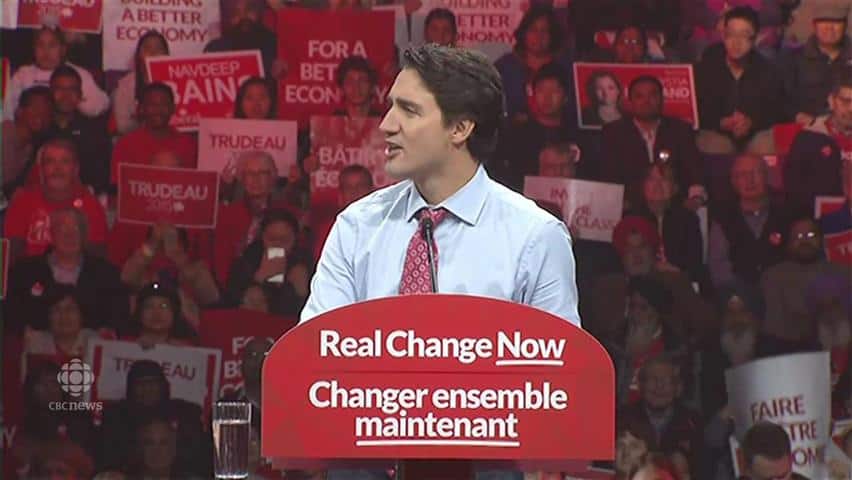 Justin Trudeau to 'bring Canadians together'

5 years ago
1:56
Liberal Leader Justin Trudeau vows to "bring Canadians together" at a Brampton rally in contrast to what he described as Conservative Leader Stephen Harper's politics of fear. 1:56

Liberal Leader Justin Trudeau promised Sunday to replace Conservative Leader Stephen Harper's "small and meek and fearful" vision of Canada with one that is "open and confident and hopeful" as he campaigned in front of thousands of cheering party faithful at a Brampton, Ont., arena.

"Well, let me tell you something. Fear makes us weak, not strong. The prime minister's job is to bring Canadians together, not to tear us apart."

The Conservative campaign has emphasized banning face-covering religious garb at citizenship ceremonies, revoking the citizenship of dual citizens convicted of terrorism and cracking down on what the Conservatives have called "barbaric cultural practices."

The prime minister's job is to bring Canadians together, not to tear us apart.- Liberal Leader Justin  Trudeau

Trudeau said the Conservatives under Harper "have brought unprecedented nastiness" to public life.

"For 10 years, Stephen Harper has never missed an opportunity to divide Canadians. East against West. Urban against rural. French against English. So-called 'old stock' Canadians vs newcomers," he said.

At least 5,000 supporters attended the rally, held in one of the country's most ethnically diverse cities where half the residents are immigrants for whom the prospect of two classes of citizenship is particularly worrisome.

Trudeau was introduced to the crowd by his wife, Sophie Gregoire.

She quipped the long campaign may have led her husband to call the Bloc Québécois leader 'my love' in French during the French debate on Friday.

"You know, he does have beautiful blue eyes but when your husband starts calling Gilles Duceppe 'mon amour,' you know it's been too long," she said.

The Liberals will release their full platform on Monday, which will include some new spending commitments, but they say it's all accounted for in their previously unveiled fiscal framework.

It will come a day after the Liberals launched a suite of new ads — three television and two radio spots — aimed squarely at Harper.

The ads contrast what Trudeau depicts as the Conservative leader's dismal economic record with the Liberal prescription for immediate "real change" to boost growth, create jobs and put more money in the pockets of struggling middle-class Canadians.

Only one makes a passing mention of NDP Leader Tom Mulcair, whose party began the campaign as the front-runner but is now flagging in the polls.

Trudeau maintains that Harper has latched onto the niqab controversy and other hot-button issues as a distraction from his economic record, which is the sole focus of the new Liberal ads.

They hammer away at the theme that the Conservative leader is tired, out of touch and out of ideas to get Canada's stagnant economy growing again.

"You know what they say about doing the same thing over and over and expecting a different result," Trudeau intones in one TV ad as the screen fills with multiple shots of a dour-looking Harper over the years, buttoning his suit jacket as he rises to speak in the House of Commons.

"Stephen Harper has had 10 years to get our economy moving and he's failed. His plan for moving ahead? More of the same. Harper thinks everything is fine but our middle class is falling behind."

The ad then cuts to a cheerful, youthful Trudeau, shirt sleeves rolled up, tie loosened, striding purposefully across the grounds of Parliament Hill as he recites the pillars of his economic plan: "Raise taxes for our wealthiest one per cent, cut them for our middle class and invest now in jobs and growth. That's real change."

Mulcair mentioned in one ad

In one radio ad, Trudeau promises to cancel child benefit cheques to the wealthiest one per cent — "and I'll do it now," he says.

The emphasis on immediacy in all the ads is a veiled dig at Mulcair, who is mentioned by name only in the other new radio ad, directed specifically at Torontonians.

In that ad, Trudeau opines that "the traffic in Toronto is unbelievable." He then trumpets his plan to "triple federal investment in transit over the next four years" — and says that's something neither Harper nor Mulcair can promise "because they want to balance the budget in Year One."

During Sunday's rally in the Toronto suburb, Trudeau accused Harper of being too out of touch with Canadians to understand traffic gridlock.

"Stephen Harper just doesn't see what you're going through. When you spend a decade in a motorcade, you don't have to worry about traffic jams. That's what happens when you've been in power too long," he said.

Trudeau is promising to run deficits of less than $10 billion for each of the next three years in order to almost double the federal investment in new infrastructure.