Tom Mulcair is promising that an NDP government would move toward legalizing marijuana.

Legalization 'is the direction that it is going in. Look at Oregon. Look at Colorado,' NDP leader says 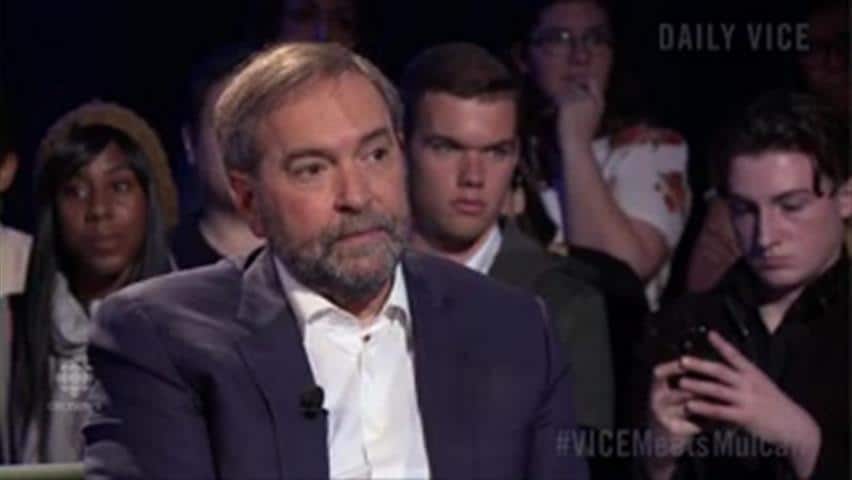 Mulcair on pot: "of course we are on a track to full legalization"

Tom Mulcair is promising that an NDP government would move toward legalizing marijuana.

In a live interview with Vice Canada, the NDP leader said he would decriminalize pot immediately if elected and then look at making the drug legal in Canada.

"We are on track to full legalization, but it is more complicated than snapping your fingers. We are not going to have weed being sold at the LCBO tomorrow morning," Mulcair told the live studio audience.

In a parliamentary report published in June, the NDP pledged it would study the regulation and legalization of marijuana. Now the NDP leader is going further by suggesting legalization is inevitable.

The NDP leader noted a wider societal push toward legalization and spoke about U.S. states that have legalized cannabis.

"It's going to get done. I mean that is the direction that it is going in. Look at Oregon. Look at Colorado," he said.

"We are getting more and more information, and that's the kind of thing that will be the way for the future."

Mulcair pledged that under a New Democrat-led government, no one would get a criminal record for possession or use of marijuana.

Under Justin Trudeau, the Liberals have promised to legalize marijuana. The Conservatives have said they will keep the drug illegal and promise further crackdowns.