$1.9B surplus pushes economy back to top of election agenda

The Conservative election campaign was buoyed by news today that the government posted a nearly $2-billion surplus for the last fiscal year, but opponents say that was done by squeezing vital services for seniors and veterans. Budget bonus for the Tories

The Conservative election campaign was buoyed by news today that the government posted a nearly $2-billion surplus for the last fiscal year, but opponents say that was done by squeezing vital services for seniors and veterans.

Figures released by the Finance Department showed a $1.9-billion surplus for the 2014-2015 fiscal year, just shy of the $2-billion surplus the Conservatives had forecast in the May budget. The bottom line reverses a $5.2-billion deficit in the previous fiscal year.

Conservative Party Leader Stephen Harper said the figures prove Canada is on the right track and that his party is offering affordable next steps to build on long-term prosperity. During a campaign event in Kamloops, B.C., he called it "absolutely absurd" to suggest the surplus is due to lapsed spending.

"This is incredibly good news. In spite of all the problems of the world, this country has a balanced budget, has had it all along, and the other parties are going to have to explain why now would be a good time to throw us into deficit," he said.

Harper also blasted the NDP record of governing in B.C.

"Twice in the past 40 years, the NDP has held power in B.C., and each time that has been an unmitigated economic disaster for this province and for British Columbians," he said.

Federal spending increased during the year, coming in at $280.4 billion for the year ended April 1.

But that was more than offset by a corresponding increase in revenues, which came in at $282.3 billion, an increase of $10.7 billion or 3.9 per cent.

Liberal Leader Justin Trudeau called the surplus "political," and accused the Conservatives of balancing the books on the backs of some of the most needy Canadians before the Oct. 19 election.

"It was a political goal that actually has helped us slide into the recession that Canada is the only G7 country in right now," Trudeau said during a campaign event in Toronto.

The Conservative campaign rejected Trudeau's assessment, noting that major transfers to individuals, including Old Age Security and the guaranteed income supplement, increased nearly six per cent or $4.2 billion. The campaign also said major transfers to other levels of government increased by $2.6 billion, or 4.4 per cent, in the last fiscal year.

Trudeau has promised to run small deficits for the next three years and balance the books by 2019 if elected, and would would invest heavily in infrastructure and transit to kickstart the economy and create jobs.

The Liberal leader also took a broad swipe at NDP Leader Tom Mulcair, accusing him of "backdating" his campaign promises to avoid running a deficit.

"What he's saying is his priority is getting out of deficit right now and giving Canadians the help they need later, in a few years," he said.

Mulcair said the long-term plan is to phase in key planks such as $15-a-day child-care spaces or recruiting more health professionals, without dumping a "massive debt" on future generations. 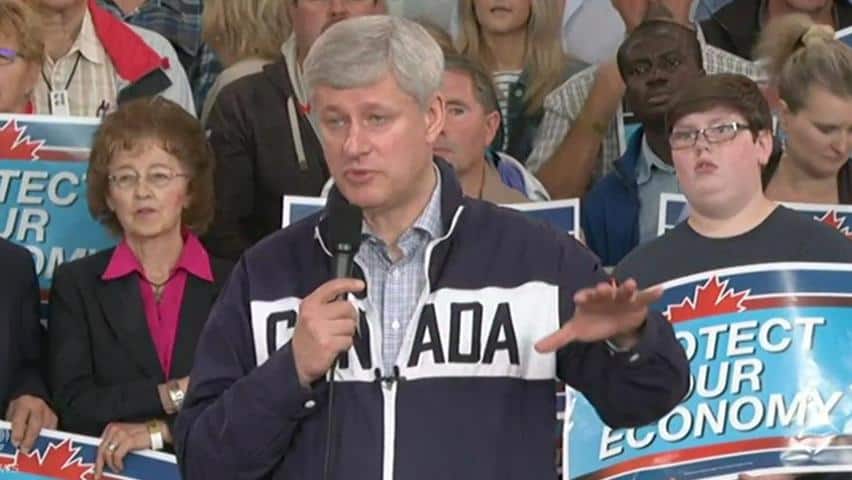 5 years ago
2:08
Conservative Leader Stephen Harper says it is absurd to say that lapses in government department spending caused the current recession while helping to create a modest budget 2:08

Mulcair has promised to release a full costing of the NDP promises before Thursday's leaders' debate on the economy.

Former parliamentary budget officer Kevin Page said it's positive news that the books are back in balance, but said the details on the real source of the surplus won't be known until the public accounts are tabled in November.

CBC News has reported that a number of federal departments have had "lapsed spending"  — money promised but never spent. Among the serial lapsers in a top-seven list compiled by the Privy Council office were departments which failed to spend all their budgeted money for infrastructure and procurement, including National Defence, while Aboriginal Affairs regularly fell short of spending its full budget.