The French-language leaders' debate: Lost in translation, or just lost?

Steve Patterson, comedian and host of CBC Radio's The Debaters, tries to make sense of the French-language leaders' debate but finds himself lost in translation.

I didn't have a chance to watch the French leaders' debate live last week because I was, ironically, moderating a debate at the time. True story.

So I resigned myself to watching a replay of the full debate online later. Which proved impossible to find. CBC's website listed "5 feisty moments" from the debate, while the Huffington Post Canada, which apparently had live streamed it, left up a video link with the message "this video is private." Apparently that website is just for the personal use of Arianna Huffington now?

In any case, I wanted to watch it, even though — full disclosure — I do not speak French fluently. I wish I did, but I don't. My French teacher from grade school in London, Ont., was Italian (I also don't speak Italian) and the one phrase they drilled into us was how to say, in perfect French, "I don't speak French" (Je ne parle pas français).

This is a bad first sentence to learn how to say. Because when someone walks up to you and asks you a question in French and you respond, "Je ne parle pas français" it's exactly like you asking someone a question in English and them responding "I'm sorry, I don't speak a single word of English."

All of this to say, I really can't give a fair review of the French leaders' debate since:

But what I can do is comment on some of the differences between the French debate and the English debate which I found très interesting (again, I'm not fluent). So here goes, not in order of importance but in order of my confusion.

Good old Gilles. He was brought back from the political afterlife by the Bloc Québécois in an attempt to revive a party that no one outside the province of Quebec (and many within it) understands the relevance of. Keeping the French language alive in Canada? Absolutement! But constantly trying to separate a province that I have many friends in from the rest of us, n'absolutement pas!

Why is a man who is barely relevant in one province on stage with other leaders who have actual national party members? (Other than to make Elizabeth May feel better.)

The one sound bite I found that Gilles contributed was this:

"The first bill the Bloc Québécois will introduce is forbidding voting while wearing a face covering, oath of citizenship or granting services with a face covering."

I'm not sure what is more surprising about this: That the "first bill" the Bloc would introduce doesn't involve an immediate referendum on Quebec independence, or that this issue of the face covering "niqab" is a thing being debated by our federal leaders. But it is (in Quebec) so let's talk about it…

Apparently this is a strongly divisive point. Some are even saying that Tom Mulcair's handling of it may cost him several seats in Quebec. I personally don't understand it.

Do you need to be able to identify a person at a swearing-in ceremony to become a citizen? Yes. Can this be done with an iris scan if necessary, like it is for re-entry into Canada with your Nexus card? I don't see why not. I guess they're afraid that if they can't see the person's face they might not be sincere in making their citizenship oath? But politicians, of all people, should know that even when you can see a person's full face it doesn't guarantee that what is coming out of it is sincere.

From what I understand, women wearing niqabs do have to reveal their faces at some point in the process. They simply don't want to do it at the public swearing-in ceremony based on cultural religious beliefs. This somehow escalated into a heated debate between Mulcair and Harper, or at least between their translators:

Mulcair: "Mr. Harper is trying to hide his record behind the niqab."

Harper: "Mr. Mulcair, I will never tell my young daughter that a woman should cover her face because she's a woman."

Clearly, I missed something in translation here.

I'm not even sure if this is a women's rights issue or a cultural issue anymore. All I know is at some point in the process, if you want to become a Canadian citizen, you must clearly identify yourself. If you don't do that, you can't become a citizen.

Which is tough, because this means that Spiderman couldn't become Canadian if he wanted to. And you know that hurts Harper. Because he is "tough on crime" and Spidey is a crime-fighter!

I salute anyone who can competently translate from French to English (or any languages for that matter) in real time. This would be difficult in everyday conversations with normal people. But trying to translate politician-speak? That's like trying to explain theoretical physics to, well, most of us. 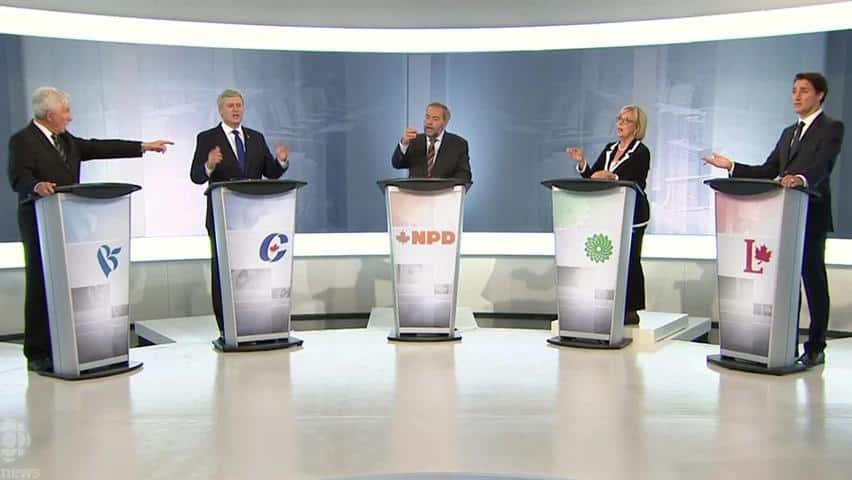 Leaders talk over each other

5 years agoVideo
0:32
The French language leaders debate sometimes devolved into everyone talking over each other as seen in this clip. 0:32

The closest match was Mulcair's guy. He sounded quite like Tom. Passionate with a temper just under the surface that flared up above it. Anyone who has spoken to a French Expos fan about the lost '94 season knows the type.

Harper's fellow wasn't very Harper-like. But then again, I'm not sure there is a French man in the world who can match that robotic indifference.

But Justin Trudeau's translator? Mon dieux! He sounded like a French-speaking William Shatner. He paused after every word for effect. Like he was reading a poem that he thought no one else would understand if he didn't ... read it ... slowly.

For instance, when describing Canada's place in the world under Harper, Trudeau's translator said:

"We used to have respect in the world … and for the last 10 years ... we became less Canadian on the world scale."

Never mind that the "world-scale of Canadianness" is an interesting abstract that I didn't know existed in English or in French, but more importantly, that phrase took a long time to say by French Shatner.

This might have been OK if the other leaders sat back and let those … spaces … exist. But they didn't. They filled in every possible pause. It was like conversational spray foam.

Remember what you saw in the English debates? Now add a whole other set of people interrupting each other on top of the leaders interrupting each other. The moderator tried to jump in, which didn't help. Neither did the two men asking questions in French from a separate desk, which I still don't understand the purpose of.

So in the end, what could have been an informative debate on national issues with the added bonus of teaching many English-speaking Canadians how to speak eloquently in our other official language quickly devolved into a fight over whether women new to Canada must shun their cultural beliefs to be sworn in.

An argument supported by a man with no mathematical possibility of becoming the next prime minister (I'm talking about Duceppe here) and which, under no possible scenario, should affect how Canadians vote in the next election. All of this hidden in a shouting match between eight people, one moderator and for reasons still unknown, the Quebec answer to the old guys from the Muppets.

Maybe that's why no one bothered to post the whole thing online so others could watch and listen to it. But given what you now know, aren't you sort of interested in seeing it? [Editor's note: We're working on it! Editor's UPDATE: Patterson gets results — here's the full debate in English:] 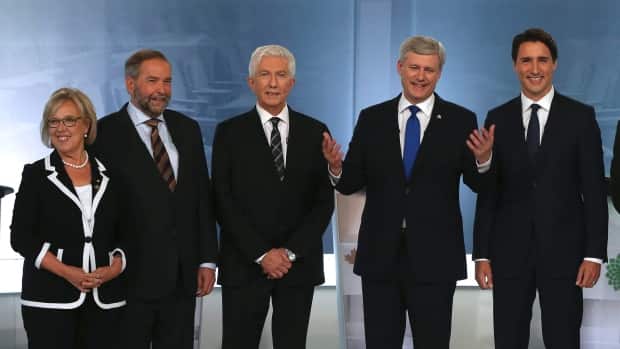 Because in terms of pure entertainment value, I'm betting that this one was, by far, the best one yet.

As host of CBC Radio One’s wildly successful show The Debaters, Steve Patterson has become a household name. He's an international headline stand-up comedian, and has performed on a number of Just For Laughs’ prestigious televised galas. Steve was Canada's Best Male Stand-Up in 2011.