The government's decision to accelerate the resettlement of 10,000 Syrian refugees by next fall comes after comments about the government's cuts to refugee health care during last week's debate on the economy. Are "bogus" refugees the only people affected by federal health cuts? 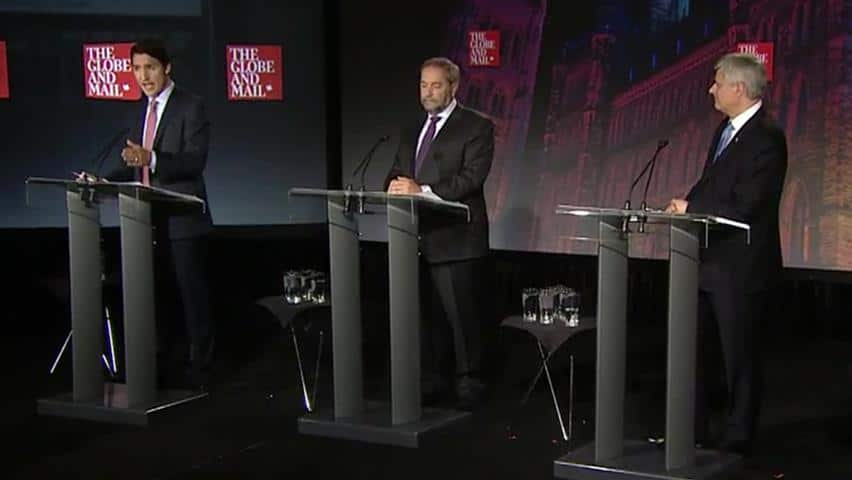 "Mr. Harper has demonstrated over the past weeks that in the case of refugees, Canada is not doing enough. ... He likes to talk about standing up against tyrants and dictators and against terrorists, but you know who stands up against dictators and terrorists? Families fighting to keep their family together, hoping for a better life for them. And they cross the oceans and make it to Canada and what does Mr. Harper do? He takes away their health care." — Liberal Leader Justin Trudeau, Sept. 17

Conservatives announced over the weekend the government will look to accelerate the resettlement to Canada of 10,000 Syrian refugees, involving a mix of private and government refugee sponsorships, some 15 months earlier than originally promised.

Immigration Minister Chris Alexander said the government will do that by easing some of the rules, increasing the number of staff handling sponsorship applications and appointing a special co-ordinator to oversee the matter — a proposal first made by the NDP earlier this month.

​The announcement comes after comments made by the main party leaders during last Thursday's debate about Canada's approach to refugees and the scope of the government's cuts to refugee health care.

During a question about immigration policy as a strategy to the long-term prosperity of the country, Trudeau accused Conservative Leader Stephen Harper of taking away health care from refugees.

Harper defended his party's record on immigration and responded to the Liberal leader's accusation by saying, "the fact of the matter is we did not, we have not, taken away health care from immigrants and refugees. On the contrary, the only time we've removed it is where we have bogus refugee claimants who have been refused and turned down.

"We do not offer them a better health-care plan than the ordinary Canadian can receive."

​In 2012, the Conservatives made changes to the interim federal health program, which had the effect of denying some health benefits to refugee claimants.

For instance, refugees seeking asylum from designated countries of origin, or so-called "safe countries," were left with minimal health coverage from the onset — before a hearing was set to determine the validity of their claims. Privately sponsored refugees were also affected by the cuts.

Refugee and doctors groups took legal action, and in 2014 the Federal Court found the government's treatment of refugees was not only unconstitutional but also "cruel and unusual," and gave the Conservatives four months to reverse the cuts. In November, the Conservatives temporarily restored some health benefits while appealing the ruling.

According to the government's own summary of benefits, refugee claimants receive some basic health coverage. Refugees awaiting a decision on their status, as well as privately sponsored refugees, receive basic coverage but when it comes to prescription drugs are only covered for drugs deemed necessary "to prevent or treat a disease posing a risk to public health or to treat a condition of public safety concern."

The two groups are not covered for what the government calls "supplemental coverage," which includes "limited dental and vision care, prosthetics and devices to assist mobility, home care and long-term care, psychological counselling provided by a registered clinical psychologist, and post-arrival health assessments."

By contrast, government-assisted refugees do benefit from this additional health coverage. So do refugee claimants under 19 years of age.

The minister could, according to the temporary measures, choose to extend these benefits to any person or groups due to "exceptional and compelling circumstances."

Legal arguments are expected to be heard in October, but a judgment is not expected until later this year at the earliest.

Private sponsors on hook for some costs

The Canadian Association of Refugee Lawyers and Canadian Doctors for Refugee Care, two of the five parties that challenged the cuts in court, are warning the government's moves will also affect privately sponsored refugees.

The Conservative government is abandoning PSRs [privately sponsored refugees] once they arrive, leaving it to sponsoring Canadians to pick up health costs previously covered by the government.- Canadian Doctors for Refugee Care

"The Conservative government is abandoning [privately sponsored refugees] once they arrive, leaving it to sponsoring Canadians to pick up health costs previously covered by the government," said a statement from Canadian Doctors for Refugee Care immediately following the government's announcement on Saturday.

In an interview with CBC News, Peter Showler, the co-chair of the advocacy committee with the refugee lawyers group, said the government has "foisted the main health-care burden on those private sponsorship groups.

"It's one of the many ways in which the government has discouraged private sponsorship, while at the same time shifting the burden from government sponsorship for refugees over to private sponsorships," said Showler, a former chair of the Immigration and Refugee Board of Canada and an expert in refugee law at the University of Ottawa.

While some provinces have stepped in to fill in the gaps, doctors and refugee groups say the temporary measures have created a complicated patchwork system leaving refugees and Canadians to pick up the tab.

"No refugee claimant," according to Canadian Doctors for Refugee Care, "ever received more health-care coverage than Canadians receiving social assistance."

A spokesperson for the Conservative Party referred CBC News to Alexander's office. The minister's office did not respond to CBC News' request in time for publication.

Trudeau is partly right. The government did introduce cuts to the interim federal health program, leaving refugees with minimal health benefits — but not entirely without health benefits, as Trudeau's claim may have implied.

Harper is wrong when he says the Conservative government only took away some benefits from "bogus" refugees.

Refugee claimants are currently being denied some federal health benefits while their claims are being processed, not just once their applications are rejected. Privately sponsored refugees — which includes the bulk of the Syrian refugees the government is promising to bring to Canada by September 2016 — are also among the groups of refugees receiving limited coverage.