Conservative Leader Stephen Harper says he will cease to be prime minister if his party comes a close second in the Oct. 19 election, signalling in a one-on-one interview with CBC's Peter Mansbridge that he will not resort to procedural tactics to remain in power. 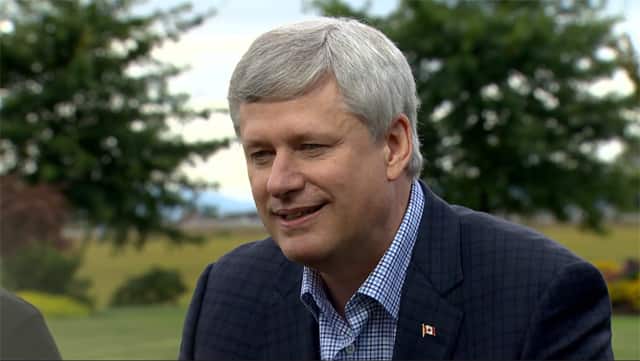 Conservative Leader Stephen Harper says he will cease to be prime minister if his party comes a close second in the Oct. 19 election, signalling he will not resort to any procedural tactics to remain in power.

In a wide-ranging interview with CBC chief correspondent Peter Mansbridge, Harper was asked whether the party with the most seats should take power in a minority government situation.

"My position has always been if we win the most seats I will expect to form the government and if we don't, I won't," Harper said.

Mansbridge asked Harper if that would be the case, even if the Conservatives finish only couple of seats behind.

"Well, I would not serve as prime minister," Harper said.

Harper made this vow with polls showing the tightest three-way race in decades. Recent surveys suggest a handful of seats might separate first- and second-place parties. Pierre Trudeau had mused about hanging onto power during the 1979 campaign that saw Joe Clark win a minority mandate.

"We don't, you know, elect a bunch of parties who then, as in some countries, get together and decide who will govern. We ask people to make a choice of a government," Harper said. "And so I think that the party that wins the most seats should form the government."

Harper appeared to be ruling out any attempt to try to cling to power through any procedural machinations following the election results if his party finished in second place. For example, if only a few seats separated his party from first place, he could try to persuade MPs from other parties to join his government.

Or, he could attempt to form a coalition with the other opposition parties. But Harper has been a vocal opponent of coalition governments. In the 2011 election, when polls suggested the Conservatives would win the most seats but might only form a minority government, Harper repeatedly denounced the idea that the opposition would take power by forming a coalition, saying it was an illegitimate way to form government.

NDP Leader Tom Mulcair has said his party is open to forming a coalition government with the Liberals. But Liberal Leader Justin Trudeau has said that while the two parties could work on legislative bills, there will be no formal coalition with the NDP.

The interview with Harper covered a number of different issues, including the current Syrian refugee crisis, a topic that became a hot issue in the campaign last week after a photo of a drowned three-year-old Syrian boy made headlines around the world.

Mansbridge asked whether countries in the West were doing enough to help.

Harper repeated that part of the solution is to counter militarily the Islamic State of Iraq and Syria and the root causes of the millions of people displaced. Canada has sent military forces to the region and has been involved in a series of airstrikes against the militant group. However, Harper acknowledged "we have to be in for the long haul."

On the economy, Mansbridge asked Harper why Canadians should trust his analysis on the current sluggish economy, given that in 2008, he suggested there would be no economic crash.

"I think what that whole period should tell us you know, analysis is great. But in the end, you don't know what you're actually going to be dealing with. We're in a very unstable world."

"Through those ups and downs this government has shown that it has a long-­term plan and also ability to adapt to situations. We have made significant policy changes at times where we've needed to."

Harper dismissed the proposals of the Liberals and NDP, which he characterized as "always spend more," and rejected the tens of billions of dollars of promises they have made in the campaign.

"There is an order of magnitude difference between the scale of the campaign commitments we have made and what the other guys have made," Harper said.

About the Mike Duffy Senate expense scandal, Harper said he was angry when he learned that his then chief of staff Nigel Wright personally paid back the senator's expenses. But Harper, who has said he didn't learn about the payment until it became public knowledge, didn't hold anyone else accountable for the scandal, other than Duffy and Wright.

During Duffy's fraud, breach of trust and bribery trial, which is currently on hiatus, court has heard that other members of the PMO at the time were told about Wright's cheque payment, including Harper's current chief of staff Ray Novak. However, Harper's campaign team had denied this.

"There's no person on my staff that I believe deceived me or acted unethically or irresponsibly," Harper said.

Asked whether he has any personal regrets about the way he handled the issue, Harper said: "Oh, probably a little bit. But I'm not going to bare my soul here."