NDP Leader Tom Mulcair vowed to repeal a law that allows the federal government to revoke citizenship for serious acts against Canada if elected after news that at least five people received notice they would be stripped of Canadian citizenship. 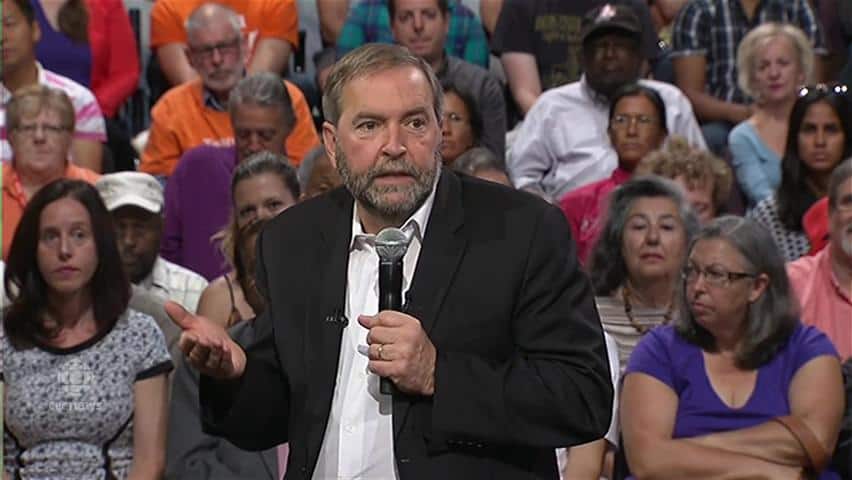 NDP Leader Tom Mulcair has vowed to repeal Bill C-24, one day after it emerged that least five people were told they would be stripped of their Canadian citizenship under the controversial law.

Mulcair made the promise at a campaign event in Toronto on Sunday and questioned the timing of the Conservative government, which has moved to revoke the citizenship of those linked to extremist activity, including three members of the so-called Toronto 18.

"By pure coincidence the timing of these things comes right in the middle of an election campaign. Give me a break. This is a political game being played on the backs of all Canadians who have different origins than 'old-stock Canadians' and I'm going to stand up against it."

I find it lamentable that in a free and democratic society someone takes joy in saying we're going to have two levels of citizenship.— NDP Leader Tom Mulcair

The law — which came into effect in June 2014 under Bill C-24, dubbed the Strengthening Canadian Citizenship Act — allows a dual national to be stripped of citizenship if convicted of offences related to spying, treason or terrorism.

A provision that came into effect in May gives the power to revoke citizenship to elected officials, in some cases.

But according to Conservative candidate Julian Fantino, the decision to revoke citizenship is in response to the growing global threat of terrorism.

"The progression of activity on the terrorism front globally has been increasing. The threat has become more and more evident to us in Canada," Fantino, who served as commissioner of the Ontario Provincial Police and as Toronto police chief before he was elected in a 2010 Vaughan byelection, said at a campaign event on Sunday.

"We are moving to deal with that surge in the threat, the real threat, and it's something that we've obviously had to deal with given the circumstance we find ourselves in."

Fantino added that "most Canadians" would not open their arms to people who want "to kill us, to harm us and to victimize us" in Canada.

The progression of activity on the terrorism front globally has been increasing. The threat has become more and more evident to us in Canada.— Conservative candidate Julian Fantino

"People who come to this country to work and to contribute are more than welcome. In fact we do that several 100,000 times a year, where we welcome people from all parts of the world," he said. "If people come here to engage in terrorist activities, there's no reason why … their citizenship as Canadians should be maintained."

Canada admitted an average of 257,000 new permanent residents each year between 2009 and 2013, according to Citizenship and Immigration Canada.

But Mulcair said that Bill C-24 divides Canadians and sets a dangerous precedent.

"What happens when the next time around, another Conservative government in X number of years decides that it's not just a question of terrorism or acts against Canada? It's murder. Or what if it's bank robbery? Or what if it's they just don't like the country where you're from and they want to send you back?"