Stephen Harper may not think a Muslim woman should be allowed to take her citizenship oath wearing a niqab, but one of his young party volunteers in Sarnia, Ont., thinks it would be fine. Yasmeen Ibrahim tells Catherine Cullen her party is "pretty diverse" and it's unfortunate people suggest it's racist. 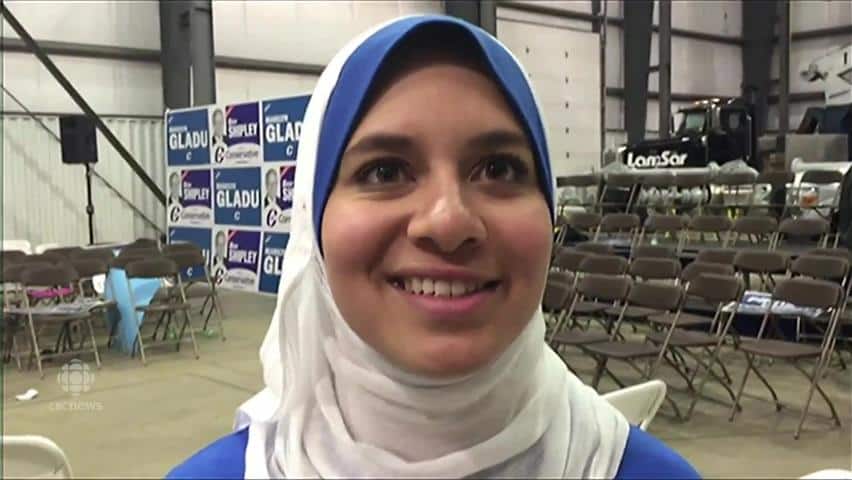 5 years ago
5:11
Yasmeen Ibrahim, a 20 year old volunteer with the Conservative Party, says the Party is not racist,that everyone is entitled to their own opinion, but women should be able to wear a niqab at citizenship ceremonies. 5:11

Stephen Harper may not think a Muslim woman should be allowed to take her citizenship oath wearing a niqab, but one of his young party volunteers in Sarnia, Ont., thinks it would be fine.

"I don't think every Conservative believes that," Yasmeen Ibrahim said. "But … everyone is entitled to their own opinions at the end of the day."

The 20-year-old, who wears the hijab, is a former page and legislative assistant on Parliament Hill. In this election, she's volunteering with the Conservative Party in her hometown.

Speaking after Stephen Harper's event there on Sunday, she told CBC News her party is "pretty diverse" and it's unfortunate people suggest it's racist.

Here's a transcript of her conversation, beginning with a discussion of a protester outside the building.

Q: On the way in there was somebody holding up a sign that said "A vote for the Conservative Party is a vote for racism." What do you think when you see things like that?

A:I find that's really silly. It's funny. The person who came and told me, because I didn't see the sign for myself, I'm pretty sure he's got an Indian or a Hindu background. So seeing how our party is already pretty diverse, especially when you look at the youth involved in the party now, I wouldn't say that it is at all.

And like you said, you were scanning the crowds and you found me. Maybe most people, their mainstream idea of the Conservative Party and its values, they wouldn't suspect of finding a young Muslim woman who is wearing a veil in the crowd, so I completely disagree with something like that.

A: Whenever somebody is looking at Conservative immigration policies that they're putting out or the question about the citizenship ceremony and wearing the niqab, those kinds of issues, as soon as you post those all over the place everybody's like 'Oh my God, the Conservatives are totally anti-Muslim, anti-immigrant, they're extremely racist.' Whereas sometimes, like, there's a reason behind them having certain policies or  having certain ideas.

I've worked for the Conservative Party before when I was in Ottawa. I never came across anybody who disrespected me at all in the party because of my beliefs. I also came across party members who were of different backgrounds, so again, I think it's unfortunate that people see that just because of certain ideas that the media blasts out and tries to give the idea that the Conservatives are, you know, very racist or anti-whatever.

Q: You mention the niqab ruling. I'd love to hear what you think of the stance that the party has taken on that.

A: Well right now, as far I understand it, there hasn't been an exact stance taken on the niqabs and the citizenship ceremony. Am I wrong on that?

Q: They're looking to have a stay so that the woman who has been granted permission to take her citizenship oath essentially cannot do it while they continue to try to fight it in court. And Stephen Harper has said when you take the citizenship oath you should show your face if you want to become a member of the Canadian family. What do you think of that?

A: If it's for security reasons, obviously I completely understand. This isn't the first time that something like this has come up. However, the idea of it being against Canadian values to hide your identity when you're coming into the Canadian family — we're not coming in and trying to hide our identity from everybody. We're very open. We're very welcoming.

But again, like security reasons, I've seen this come up in other places before. this isn't something new. So it doesn't surprise me.

Q: My understanding is that this particular woman at the heart of this case would show her face to a female official privately beforehand and would then just want to take her citizenship oath in public once they've verified her identity. Do you see a problem with that?

A: No. I wouldn't see a problem with that at all.

Q: I'm asking because it seems like it's counter to what the party is calling for in this particular instance.

A: I don't know. If they're willing to have a female official in the back like, check her out and stuff, I think that would be fine.

Q: But Stephen Harper says even if that happens, she still shouldn't be able to take the oath with her face covered.

There was an NDP candidate who said that and then he took it back. Stuff like that maybe ... we need to talk more about that.

Q: What it is like to be a politically engaged young Muslim woman right now?

A: Everyone is very welcoming because you don't see a lot of people like that in this field. I think it's because we're still coming out of 9/11, and the idea of Islamophobia, and if I'm going to put myself in the public spotlight I'm going to be attacked for it.

In my experience, as soon as people on [Parliament Hill] or in the House of Commons saw someone like me, it was really intriguing and they were really interested in seeing what I had to say, what my ideas were. I think we can use that as a tool to get more involved and get more of our ideas out in the public.