Testy exchanges between Conservative Leader Stephen Harper and Liberal Leader Justin Trudeau over legislation that can strip citizenship of those convicted of terrorism-related offences marked one of the more heated moments during Monday night's debate on foreign policy. 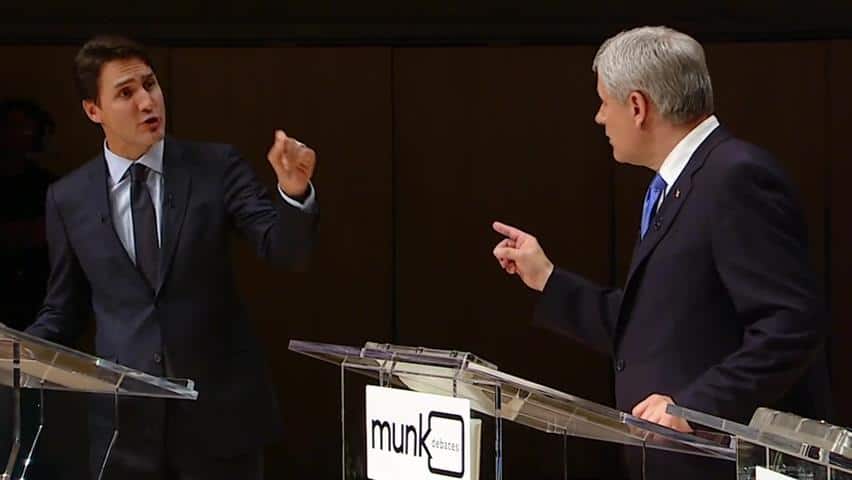 Harper and Trudeau spar over C-24 at Munk debate

5 years ago
0:44
Justin Trudeau and Stephen Harper face off over Bill C-24 which allows a dual national to be stripped of citizenship if convicted of offences related to spying, treason or terrorism. 0:44

Testy exchanges between Conservative Leader Stephen Harper and Liberal Leader Justin Trudeau over legislation that can strip citizenship of those convicted of terrorism-related offences marked one of the heated moments during Monday night's debate on foreign policy.

While Harper and Trudeau may have had the sharpest exchanges of the night, NDP Leader Tom Mulcair unleashed a number of barbs at the two leaders.

The two-hour debate, held in Toronto and hosted by Munk Debates, covered a number of foreign policy issues, including Canada's ISIS mission, the Syrian refugee crisis and anti-terrorism legislation.

Harper's record was the focus of attacks for most of the evening. But it was the issue of Bill C-24 that sparked the liveliest verbal confrontation in the debate, which was mostly void of the typical exchanges of prior contests in which leaders frequently talked over one another.

Dubbed the Strengthening Canadian Citizenship Act, Bill C-24 introduced amendments to the Citizenship Act that allow a dual national to be stripped of citizenship if convicted of offences related to spying, treason or terrorism.

Trudeau said the Liberal Party was worried that the first response by the government against individuals convicted of certain crimes was not to keep them in jail, but that they be subject to a two-tiered citizenship. Trudeau said it's worrisome and a slippery slope, that a prime minister has the ability to revoke citizenship for people.

The Conservative government announced Saturday that it revoked the citizenship of Zakaria Amara, a member of the so-called Toronto 18 bomb plot group sentenced to life in prison in 2010.

Harper shot back at Trudeau that Canada has already revoked citizenship of war criminals.

"Why would we not revoke the citizenship of people convicted of terrorist offences of this country?" Harper asked. 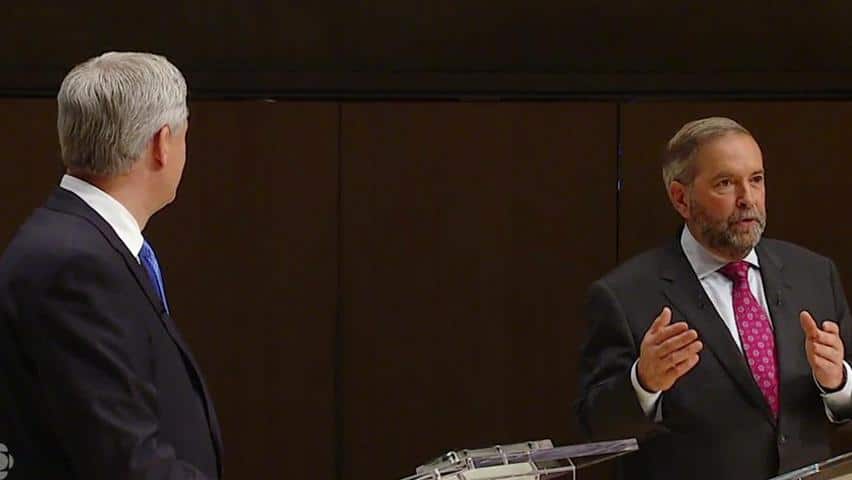 Harper and Mulcair on Keystone XL

5 years ago
0:46
Tom Mulcair and Stephen Harper argue the Conservative government's strategy on the Keystone XL pipeline at the Munk debate on foreign affairs. 0:46

A back and forth between the two leaders ensued, with Trudeau insisting that those types of individuals, regardless of their crimes, should stay in jail.

"This country has every right to revoke the citizenship of an individual like that," Harper said.

Trudeau and Mulcair have vowed to repeal the Citizenship Act amendments made under Harper.

On the issue of ISIS, Harper defended Canada's military mission, which involves airstrikes and training local ground troops. Harper said that ISIS unchecked has the potential to slaughter millions, and if left unchallenged it would set up terrorist base camps in Iraq and Syria that could threaten Canada.

"We have a very clear reason for being there. Why we would abandon this mission is a question that goes begging," Harper said.

Mulcair, who has said his government would bring back all the troops from the Iraq mission, said more than 60 countries are involved in the mission, but only 12 involved in combat and that Canada did not have to be one of those 12. Mulcair said the NDP is not opposed to all combat missions, but it "is important to remember that this is not a NATO mission. This is not a United Nations mission," he said.

"When your only tool is a hammer, all problems resemble nails." 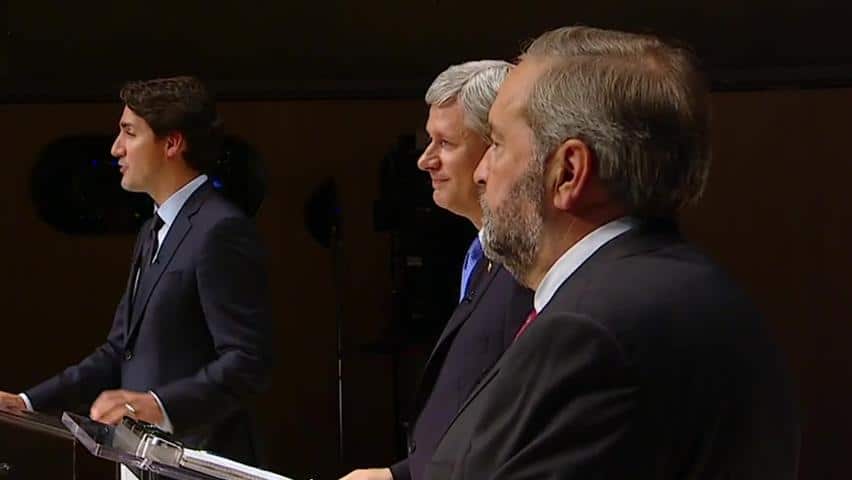 Mulcair: 'I leave the pomp to you Justin'

5 years ago
0:32
Tom Mulcair gets in a zinger as Justin Trudeau discusses the NDP's cap-and-trade system at the Munk debate on foreign policy. 0:32

Trudeau suggested that Harper never met a military mission in the Middle East he didn't like, including supporting the 2003 Iraq invasion. But he also rejected Mulcair's approach, saying he doesn't want to be in any fight.

Instead, Canadians should be focused on training local forces so they can defeat ISIS on the ground, he said.

Harper fended off accusations that his government has lagged in the admission of more Syrian refugees.

Trudeau said the problem is there's no political will from the Conservatives and cited past Canadian governments, including that of Progressive Conservative prime minister Joe Clark, who had  taken in thousands of refugees.

But Harper argued that security concerns must be weighed and that Canada has not "opened the floodgates," unlike other European countries that are now reconsidering those decisions.

Harper said that a refugee policy needed to be about more than just "chasing headlines."

This prompted Mulcair to chastise Harper for saying that those trying to help the most needy of the earth were "somehow chasing headlines."

The issue of Bill C-51, the controversial anti-terrorism legislation that gives more powers to Canada's security forces like CSIS, led to a pointed exchange between Trudeau, who supported the bill, and Mulcair, who opposed it. The Liberal leader accused Mulcair of flip-flopping on the issue three times, saying he has wanted to change, repeal and now scrap entirely the legislation.

Trudeau said his party struck the right balance of wanting to protect security while protecting rights and freedoms, and that his government would add more parliamentary oversight.

"When you have conviction, you have to have the courage of those convictions," Mulcair said.

"You voted for that, Mr. Trudeau. I stood on a question of principle. I am not afraid of Stephen Harper: I voted against Bill C-51."

Harper responded: "The threat we face today is not CSIS, it's ISIS."

Both Mulcair and Trudeau said Harper has caused Canada-U.S. relations to deteriorate, with Trudeau saying Harper has narrowed the entire relationship with the U.S. to a single point around the Keystone XL pipeline.

The NDP leader accused Harper of bungling the Keystone pipeline file by telling U.S. President Barack Obama that supporting the project was a "complete no-brainer."

"It's not a surprise they are saying no," Mulcair said.

Harper, who said he has a great relationship with Obama, turned the issue back to the military mission against ISIS, saying a unilateral withdrawal from it would be far more damaging to Canada-U.S. relations.

"If you want to poison the relationship, that would be the way to do it," Harper said.

But the debate was not all policy. At one point, Trudeau invoked the memory of his father, who died 15 years to the date, accusing the other two leaders of taking shots at the former prime minister. 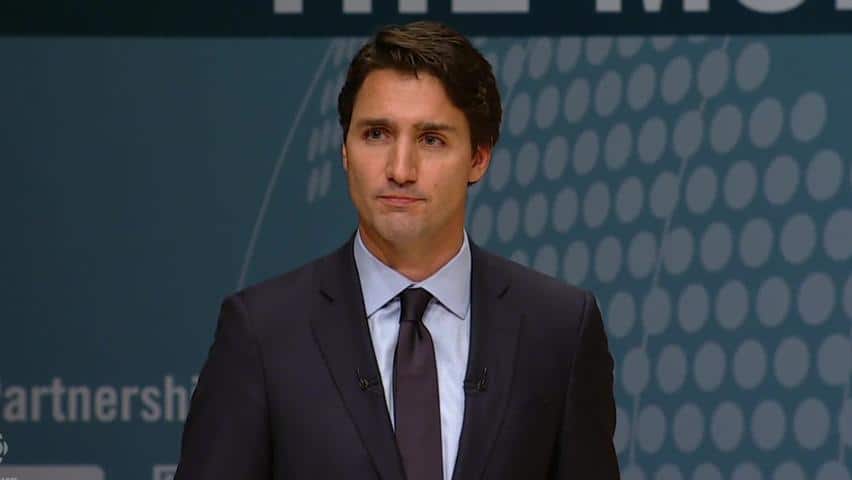 Trudeau: 'I am incredibly proud to be Pierre Elliott Trudeau's son'

5 years ago
1:04
Liberal leader Justin Trudeau defends his father's record as Prime Minister at the Munk debate on foreign affairs 1:04