Justin Trudeau's campaign rivals are accusing the Liberal leader of disrespecting small business owners after a comment he made in an interview with CBC News Chief Correspondent Peter Mansbridge.

NDP demands apology from Trudeau for 'denigrating these hard-working Canadians' 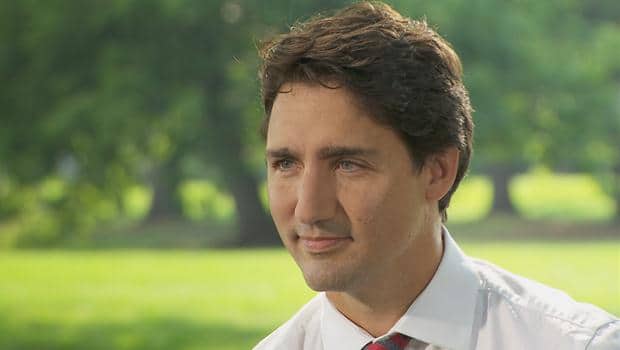 5 years ago
30:03
Liberal Leader Justin Trudeau sits down with Peter Mansbridge for an exclusive interview. 30:03

Liberal Leader Justin Trudeau is standing by controversial remarks he made about small business owners during an interview with CBC News Chief Correspondent Peter Mansbridge, even though those comments have drawn sharp criticism from his opponents.

In a one-on-one interview that aired Tuesday, Mansbridge asked the Liberal leader about his position on taxes paid by small business.

Trudeau hinted his party may tweak the tax rate from the current level of 11 per cent if elected on Oct. 19, adding that he agreed small businesses should pay lower taxes. But he urged caution.

"We have to know that a large percentage of small businesses are actually just ways for wealthier Canadians to save on their taxes, and we want to reward the people who are actually creating jobs, and contributing in concrete ways," he said.

Skip Scribble"So there's a little tweaking to do around that."

​The Conservatives, NDP and some small business advocacy groups pounced on Trudeau's comments, with New Democrats demanding the Liberal leader issue an apology to small business owners for "smearing" and "denigrating these hard-working Canadians."

During a campaign stop at a potato processing factory in P.E.I. on Thursday morning, Harper pointed to statistics from the Canadian Federation of Independent Business that suggest about 50 per cent of small business owners earn less than $50,000 a year — including many farmers and fishermen on the island.

He added that "it's absolutely incredible" that Trudeau would lump them in with people trying to avoid paying taxes.

The Tory leader's volley echoed that of the day before, when Harper read Trudeau's exact words to a business audience at the Ontario Chamber of Commerce in Welland, Ont., eliciting gasps from the crowd.

"This is somebody running to be prime minister who thinks that a large percentage of small businesses are, you know, are tax scams," Harper said. "I mean seriously, seriously," he added for emphasis.

Dan Kelly, president of the CFIB — an organization that has consulted with the government on multiple issues facing small- and medium-sized businesses — said Trudeau's comments were unfounded.

"As the largest small business group in Canada, we see no evidence that the small business rate is being used by so-called wealthier Canadians to save on their taxes," he said.

Campaigning in Edmonton, however, Trudeau would neither apologize nor back down on his remarks.

"We are committed to evidence-based policies and I will make no apologies for that," Trudeau said.

"There are a number of studies out there. Some have shown upwards of 50 per cent where it's high net worth individuals who incorporate, professionals for example, who actually use it to avoid paying as high taxes as they otherwise would." 5 years ago
9:48
Economists debate whether Justin Trudeau is right in his assertion that some Canadians are using small businesses as tax havens 9:48

In a 2011 paper for the University of Calgary's School of Public Policy, economists Jack Mintz and Duanjie Chen concluded that reducing the small business tax rate actually discourages the growth of companies and, therefore, of job creation.

Among other problems, they wrote: "Many small businesses are created to enable individuals to reduce personal tax rather than grow companies ... With corporate organization, it is easier to split income among family members holding shares of a corporation."

The duo also argued that preferential tax treatment for small businesses creates a negative "threshold effect," wherein a small company "may stop growing simply to preserve the tax savings associated with the definition of smallness."

Mike Moffatt, a chief economist at the Mowat Centre and professor Ivey Business School who previously sat on the Liberals' economic advisory council, said on Twitter that it's "absolutely true" that some people use small businesses as a means to avoid some taxes.

<a href="https://twitter.com/glen_mcgregor">@glen_mcgregor</a> It's absolutely true. 1%ers use them as tax vehicles. This is non-controversial.

"1%ers use them as tax vehicles. This is non-controversial," he tweeted.

A spokesperson for the Liberal leader explained in an email that — while the Liberals were committed to reducing the small business tax rate to nine per cent — "neither of our opponents, including the NDP, seem interested in making sure that this benefit goes to small businesses and not high income individuals using this as a tax shelter."

With files from Tom Parry and The Canadian Press