Liberal Leader Justin Trudeau says the NDP's Tom Mulcair is choosing austerity over jobs with his promise to balance the budget — while Conservative Leader Stephen Harper insists his party has a long-term plan and urges voters to "stick to it."

Harper blasts rivals: 'You do not run around and change your plans based on daily market news'

Liberal Leader Justin Trudeau is pouncing on Tom Mulcair's pledge Tuesday to balance the budget if elected prime minister — by saying the NDP leader is choosing austerity over jobs.

"Why does he want to take billions of dollars out of the economy in a recession, and what public investments will he be cutting to do that?" Trudeau told supporters at an event tonight in Brampton, Ont., alongside former prime minister Paul Martin.

"Let me tell you this, the choice in this election is clear. It's between jobs and growth or austerity and cuts — and Tom Mulcair just made the wrong choice."

Campaigning Tuesday in Kitchener, Ont., Mulcair said he will still be able to invest in NDP priorities, such as seniors and child care, by scrapping the family income-splitting measure introduced by the Conservatives.

The Liberals' new salvo against Mulcair comes after Trudeau earlier in the day refused to rule out running a deficit. Mulcair's balanced budget comment came in Hamilton, Ont., a day after stock markets tanked and the loonie fell to an 11-year low.

Mulcair and Trudeau both pointed to the eight consecutive deficits under Conservative Leader Stephen Harper, and laid out their plans to bolster the economy in the face of sliding markets.

Mulcair insisted he will still be able to invest in NDP priorities, such as seniors and child care, by scrapping the family income-splitting measure introduced by the Conservatives.

"We're of course going to finish the fiscal year on Mr. Harper's watch — 2015-16 is his budget, but our first
budget will be a balanced budget," he said.

"We know because we've got a lot of experienced people that governing is about priorities. Our priorities are not the same as Mr. Harper's."

Stephen Harper's economic team can fit in a very small room. All he needs is one chair and a mirror.- Liberal Leader Justin  Trudeau 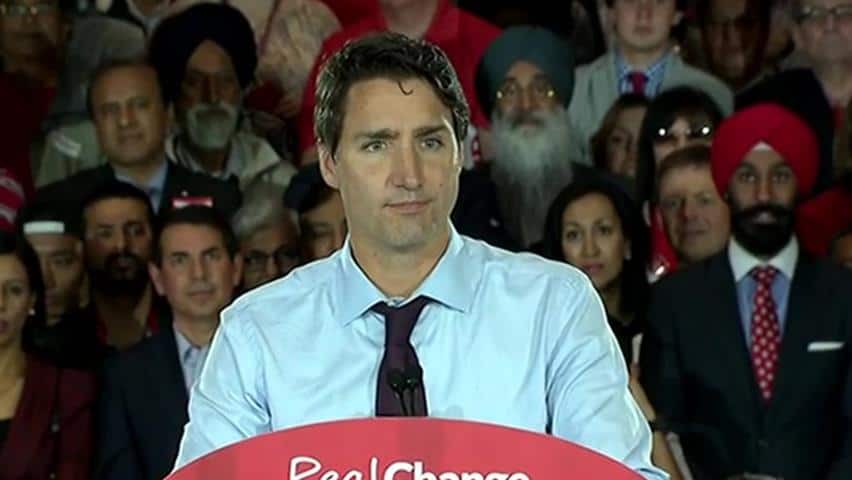 Justin Trudeau says Tom Mulcair has made the wrong choice

"You do not run around and change your plans based on daily market news. You have a long-term plan and you stick to it," Harper said, after announcing $26 million to expand the cruise ship port in Quebec City and to help build the new maritime terminal at the Port of Montreal's Alexandra Pier.

Harper defended the unusual nature of publicly reporting on a phone conversation with Bank of Canada governor Stephen Poloz yesterday, and rejected criticism he was playing politics.

The Conservative leader was briefly interrupted by a protester during an afternoon event in Lac Saint-Louis who unveiled a sign saying "Vote for climate justice" before removed from the room. 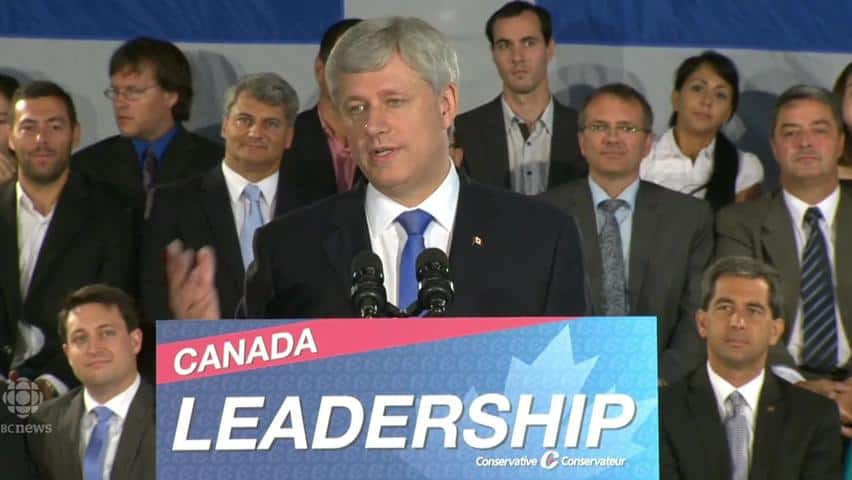 Conservative supporters are pre-screened and are given wristbands in order to attend rallies, the CBC's Susan Lunn reported from the event.

During a stop in Burnaby, B.C., Green Party Leader Elizabeth May said that the volatility in the price of oil is one of the biggest economic challenges in Canada because Harper put "all our eggs in the bitumen basket," sacrificing environmental and social demands, rather than investing in diversity.

May added that running a deficit when Canada is "verging on a recession" is "sensible," and that the Green Party would support manufacturing to create new jobs. 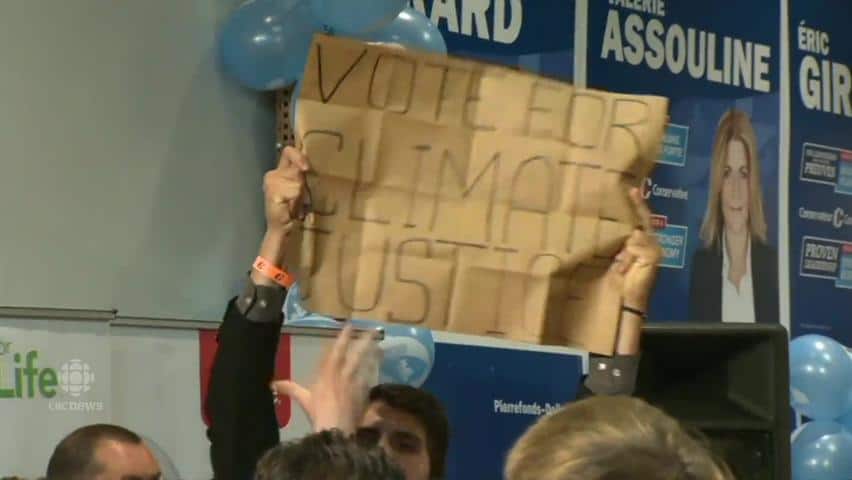 5 years agoVideo
0:42
Conservative Leader Stephen Harper's event this afternoon in Quebec was interrupted by a protester calling for climate justice. 0:42

Speaking at Bienenstock Natural Playgrounds, a small business in Hamilton that makes playground equipment, ﻿Mulcair repeated his plan to cut the small business tax rate from 11 to nine per cent, promising a new timeframe of two years.

He promised to create "good jobs" in contrast to the "part-time, low-wage, precarious jobs" created under the Conservative government. 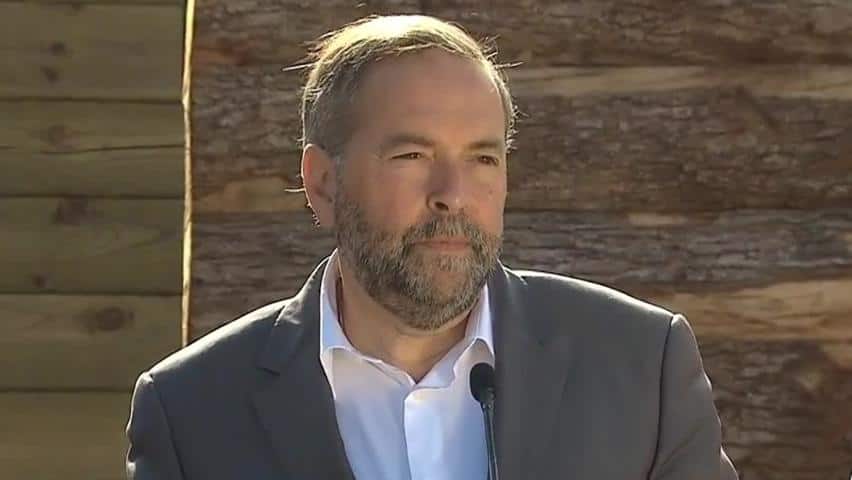 "Small and medium-sized businesses across our country account for 80 per cent of the new jobs that are created in the private sector. They are the job creators in our country," he said.

Trudeau showcased his "strong economic team" with Martin at his side Tuesday morning at a campaign event.

"Growing the economy is a team sport. So is governing the country," he said. "For 10 years, we've had a lone wolf prime minister. Stephen Harper's economic team can fit in a very small room. All he needs is one chair and a mirror. I see things differently." 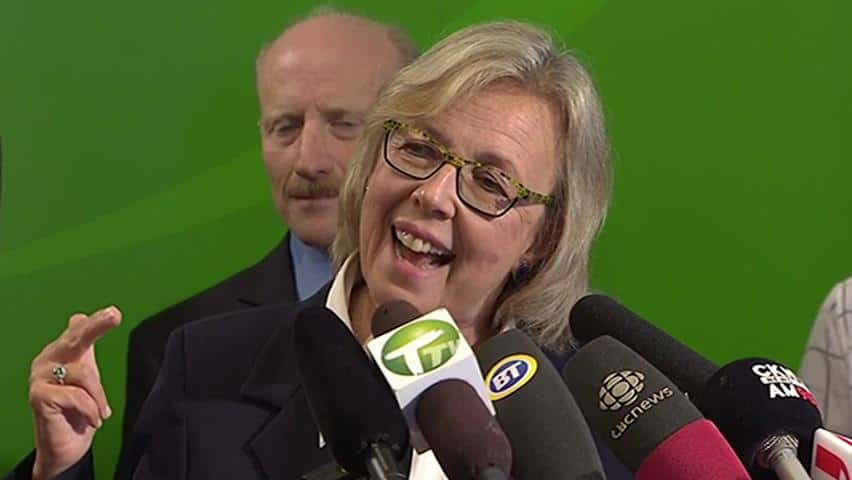 Trudeau vowed to balance the budget by investing in the middle class and creating jobs, but repeated his position that how quickly that happens depends on the "size of the mess" left behind by Harper.

Speaking on Power & Politics with host Rosemary Barton, federal NDP candidate and ex-Saskatchewan finance minister Andrew Thomson appeared to acknowledge tough spending choices will have to be made after the election.

"As a former finance minister, I know that budgeting, first and foremost, is about priorities — and you move the things that are most important to Canadian people to the top of that budget, and you work your way down to the rest of the list," said Thomson, who is running against Finance Minister Joe Oliver in the Toronto riding of Eglinton-Lawrence.

"So some stuff has to go?" Barton asked.

Shortly after Thomson's comments, NDP campaign spokesman George Soule wrote in an email to CBC News that his party has "been clear about wasteful Conservative spending we oppose" — including "partisan" government advertising, income splitting, subsidies to oil companies and "tax handouts" to Canada's most profitable corporations.