Like many Canadians, I watched last week's Globe and Mail leaders' debate on the economy. Of course, not as many watched as would have if the debate appeared on mainstream Canadian media like it always has before, but, hey, out with the "old stock" in with the new, right?

In any case, since the debate, lots of "experts" have chimed in on what they thought. But none of those people make a living from moderating comedic debates, which I do. So, here is what I would have done to make the leaders' debate a little better (and a lot funnier).

For example, when you ask for specific costing for projects and a leader responds with "we're going to invest in Canada's future," you as moderator must respond with "I'm not sure you understand what specific costing means. What AMOUNT will you invest?" Then, when they give another non-answer such as "we're going to do what Mr. Harper has not" you respond with "so … you have no idea what this costs then? OK. Good talk."

Also, when the leaders start squawking over each other (which they did so many times it was like watching an episode of The View), it is your job as moderator to overpower them with a sharp rebuke, a gavel slam or, when possible, a loud horn (trust me I know this works). Then take away "points" which, though not real, do give an indication of who actually "wins" a debate.  Which brings me to my next suggestion.

The problem with a partisan debate is that there is no clear, numerical winner. Ask members of each party and they will say their party leader won. This wouldn't be the case if a score were kept similar to boxing or wrestling where referees award official points for takedowns or punches landed.

When a leader responds to another leader's B.S. by pointing out why it is B.S., that is an official point. And whenever someone is able to show a flair for word-smithing that is appropriate to the situation, that is worth two points. 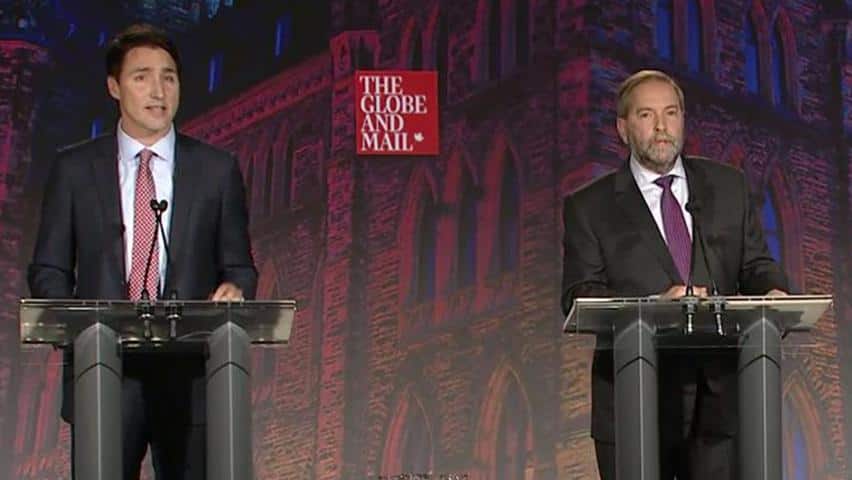 For example, when discussing the resource economy and Tom Mulcair said "Mr. Harper has put all his eggs into one basket and then he dropped that basket." BOOM! That's two points.

Heck, even Stephen "stone cold" Harper got into the fun when, after being accused by Mulcair of holding a "secret meeting with media," responded with "Well, I don't know how you have a SECRET meeting with media." Well played Steve. I didn't know you had it in you. Two points.

More importantly though, official points should be subtracted for insufficient, poorly phrased and just plain incorrect answers. Such as when Mr. Trudeau addressed everyone right out of the gate as "my friends." I'm sure he's a friendly fellow, but I've never met him. So that statement is false. Minus one point.

3. If you're going to have a live audience, make sure they are lively

I applaud the Globe & Mail's initiative to include a live studio audience. In the last election the debates appeared to have taken place in an abandoned farm silo. However, there is no point in having a live audience if they are not allowed to participate.

At the very least, open the floor to a question or two that comes from an everyday Canadian if, for no other reason, to get away from the voices of the others, which tend to become monotonous after a while (like, say, three minutes).

But, also, you can be damn sure a straight-forward question from a real person, rather than a tightly scripted one from professor Hogwarts, would be more sincere and would precipitate more sincere answers.

More puzzling to me, however, was the fact that the audience didn't react to ANYTHING throughout the debate. I'm not sure whether they were instructed to be silent, whether they weren't microphoned properly or whether the amount of verbal methane being pumped out at them actually knocked them unconscious.

Whatever the case, a lively debate deserves a lively audience. Especially when it takes place in Calgary, home of the Calgary Stampede: "The greatest outdoor show on Earth." Apparently, all that excitement was left outside of the people assembled inside for this debate. And speaking about the debate setting … 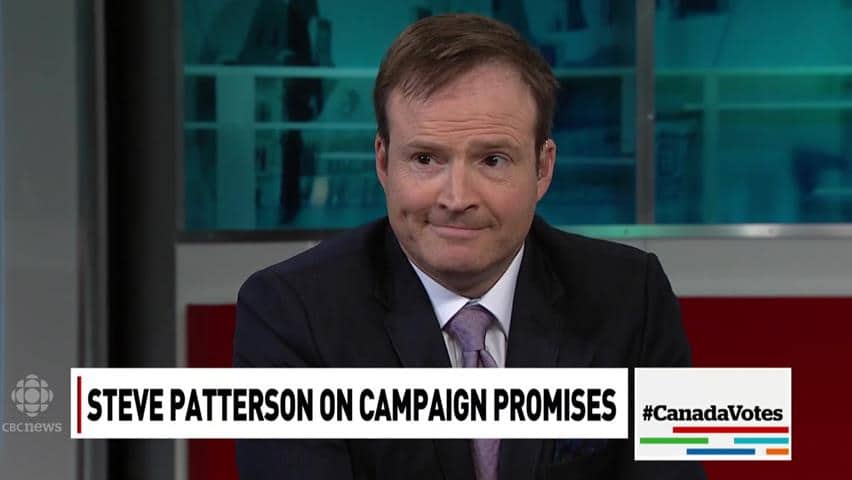 5 years agoVideo
8:05
Steve Patterson, host of CBC Radio's The Debaters, discusses the campaign and what cars remind him of the party leaders 8:05

4. How about a less demonic set?

I'm not sure who came up with the idea for a red-light, just outside the Parliament buildings background, but it had the effect of making every leader look like they were addressing us directly from either Canadian hell or the world's least sexy red-light district.

It also had the effect of making me think, whenever any of the leaders spoke, "Hmm. Maybe this man should never be allowed INSIDE the Parliament buildings?"

What would have been a better background? I don't know. Maybe having them all INSIDE the prime minister's office so we could actually picture it. Or, even better, a projection of the question they are supposed to be actually answering. Since that was nearly impossible to keep track of once they started speaking.

5. Lighten it up a bit leaders!

I'm not going to offer my opinion of who "won" the debate. That is for the audience to decide (which, by the way would be another GREAT use of the live audience. An actual vote at the end of the debate of who they thought was the winner).

In all honesty, I thought all the leaders lived up to their reputations coming in. Even the physical positioning, which apparently was done randomly, turned out very intriguing; Harper on the far right, Trudeau on the left and Mulcair right down the middle.

I understand that the leaders have to stick to their talking points and there is a LOT at stake if they make mistakes. But a little levity where appropriate can go a long way.

Well-placed sarcasm can really cut through the serious overtones. This was emphasized by the few audience reactions that were audible, such as when Mulcair responded to the moderator's question "How do you respond to the ding-dong of the other two" by saying "I'm going to try to ring their bells."

There needs to be more moments like this in live debates. Sure this is a serious election with serious ramifications for our future. But, in an economic debate, let's not lose sight of Canada's real most valuable export: our sense of humour.

Does our next prime minister need to be a comedian? No (most of us comics can't help giggling whenever we hear the word "caucus"). But should our next leader be able to exhibit some semblance of humour and quick-thinking as well as wisdom? I would argue yes.

Because when you make someone laugh (on purpose, not just by voicing a ridiculous lie), you have shown that you have at least one thing in common with them. Which gives you a much better chance of having people listen to the next thing you say.

As host of CBC Radio One’s wildly successful show The Debaters, Steve Patterson has become a household name. He's an international headline stand-up comedian, and has performed on a number of Just For Laughs’ prestigious televised galas. Steve was Canada's Best Male Stand-Up in 2011.